How a Medieval Knight Solved One of History's Great Crimes

Eric Jager teaches medieval literature at UCLA. His latest book, Blood Royal: A True Tale of Crime and Detection in Medieval Paris, appeared this year from Little, Brown and Company. 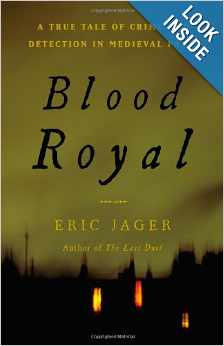 Raymond Chandler famously begins The Big Sleep with private eye Philip Marlowe staring at a stained-glass window in General Sternwood’s mansion that shows a knight rescuing a damsel in distress. Chandler’s portrait of the ideal detective in his essay, “The Simple Art of Murder,” also hints at knighthood. The “hero” is “a man of honor,” “neither tarnished nor afraid” as he pursues “adventure in search of a hidden truth.” In fact, one of history’s first detectives was an authentic knight who faced his most risky adventure in seeking the hidden truth of a notorious crime.

In 1407, Duke Louis of Orleans, who often ruled in place of his insane brother, King Charles VI, was cut to pieces by a gang of masked thugs in a Paris street. Louis’s assassination would plunge France into a bloody civil war leading to Henry V’s invasion and ultimately setting the stage for Joan of Arc. But the official murder inquiry, committed to a thirty-foot parchment scroll sprinkled with grisly details, disappeared soon after the crime.

The scroll turned up again almost three centuries later at an old chateau in the south of France. (Imagine the Zapruder film of JFK’s assassination lying unknown in a drawer for decades.) A copy of the scroll was sent to Paris, only to be shelved in the royal library and forgotten. Almost another century went by before a scholar stumbled on the copy and realized what he had found. He published a few tantalizing excerpts, but not until the 1860s, when the original scroll turned up again, did the complete report get into print. The published report opened a new window on a turbulent week in Paris that had changed the course of history. But even today it is not widely recognized that the report’s author, the lead investigator, was one of history’s first detectives.

Long before Eugène François Vidocq (founder of the Sûreté) and Allan Pinkerton (who protected Lincoln) and Jack Whicher (a model for Sergeant Cuff inthe Wilkie Collins novel The Moonstone) there was Sir Guillaume de Tignonville, who investigated and solved the sensational 1407 murder. A skilled knight and the veteran of several campaigns, he was also a well-traveled diplomat, a trusted royal advisor, and a man of law. One chilly November night in Guillaume’s seventh year as Provost of Paris — the king’s chief law enforcement officer — a breathless courier arrived at the Provost’s house with news of Duke Louis’s murder less than an hour before.

Guillaume, with his lieutenant and officers, all armed and carrying torches, rushed to the scene of the crime in the rue Vieille du Temple, a narrow street in the Marais no wider today than it was back then. The duke’s butchered body had already been removed from the muddy pavement to a nearby house, where Guillaume examined the corpse. One hand had been cut off, the other arm slashed to the bone, and the head mutilated by ax-wounds “so enormous,” says his report, that “the entire brain protruded.”

Questioning the people at the scene, Guillaume gathered some preliminary information and dispatched officers to search a nearby house apparently used by the assassins as a hideout. He had all the city gates closed to keep the killers from escaping, and he posted soldiers in the streets to prevent panic among Parisians. Then he set about solving the crime, working through much of the night and apparently with little sleep over the next several days.

A brilliant sleuth, Guillaume marshaled the scores of officers and clerics at his command to examine the crime scene, collect physical evidence, depose witnesses, and ransack the locked-down city for clues. He questioned shopkeepers to see if they recognized items found in the assassins’ hideout – a rented house in the Rue Vieille du Temple -- and he ordered innkeepers throughout the city to bring him lists of their guests, in case the murderers were among them. What’s more, he wrote it all down. In the scroll he left behind, filled with small, neat script now faded from black to brown, we have one of the earliest detailed accounts of a criminal investigation.

The scroll was probably drawn up at the Chatelet, a gloomy old fortress fronting the river on the Right Bank and housing the Provost’s headquarters. It had a morgue, several prisons, and an evil reputation because of the torture regularly used there to extract confessions. Various methods were employed, including an early form of waterboarding combined with a sort of rack.

Paris was Europe’s largest city, a teeming metropolis of over 100,000 — a noisy, crowded, smelly place of endemic crime and brutal punishment. In a pre-modern twilight of ignorance and superstition, such as the popular belief that a corpse would bleed again if the murderer were nearby, Guillaume led the investigation with remarkable legal and scientific rigor. Lacking modern forensic tools and computerized records, he relied on shoe-leather, intelligence, and a courageous pursuit of the truth.

The several dozen witnesses he summoned to give statements included barbers, shopkeepers and housewives — ordinary citizens clearly alarmed to be caught up in great events. They were deposed separately at the Chatelet in six small rooms by two-man teams, one asking them questions while the other recorded their testimony, his goose quill scratching on parchment. Six centuries later, their excited, worried voices come alive again in the transcripts, rich with everyday details from a long-vanished era.

A few witnesses had glimpsed the actual murder by torchlight. Jacquette, a shoemaker’s wife, had been holding her baby at a window above the street when she saw the gang of masked men knock Louis off his mount and slice him up with their swords and axes. As he screamed for help, she screamed, too, and the killers paused in their murderous work to shout threats at her. Along the escape route, Jean Fovel, a young barber’s apprentice, reported that some masked men had burst into his shop and knocked out the lights before fleeing down the street and tossing caltrops behind them — clusters of sharp metal spikes meant to cripple pursuers. Others also saw the escaping assassins and provided useful information.

After a number of false leads and dead ends, as well as reluctant or misleading witnesses, Guillaume found the broker who had rented the house to the assassins, and several vendors who had sold them goods or supplies. He began to suspect a far-flung conspiracy reaching into some very high places. At great personal risk, he turned the tables on the conspirators and set a cunning trap for them that finally revealed the astounding truth. Guillaume dared the lords of France to allow his officers to search their palaces, normally off-limits to law enforcement officials. The Provost’s bold move prompted a confession from none other than a member of the royal family, a lord who had conspicuously appeared at Louis’s funeral draped in black and proclaiming, “Never was there a more treacherous murder!”

Guillaume’s long, detailed investigation report does not so much as hint that he or any of his officers used torture or forced confessions to solve the case, despite the crime’s magnitude and the urgency of the situation. Instead, the Provost diligently collected evidence, deposed witnesses, and deduced the truth from the information thus obtained. Although in many ways a man of his age, in his police work he seems to have been well ahead of his time.

Besides a knight and an early detective, Guillaume was also an author — another reason for Chandler (classically educated in England) to have admired him. A friend of the poets Eustache Deschamps and Christine de Pizan, Guillaume belonged to a courtly literary club and had written some love poetry. He had also translated an originally Arabic book of moral wisdom from Latin into French, a work later printed throughout Europe and earning him an afterlife of modest literary fame.

But Guillaume should also be remembered for another work, his investigation report, an ordinary office document about an extraordinary crime. And his sober, methodical inquiry into the shocking 1407 murder should assure this brave, incorruptible knight’s place in history as a pioneering detective.