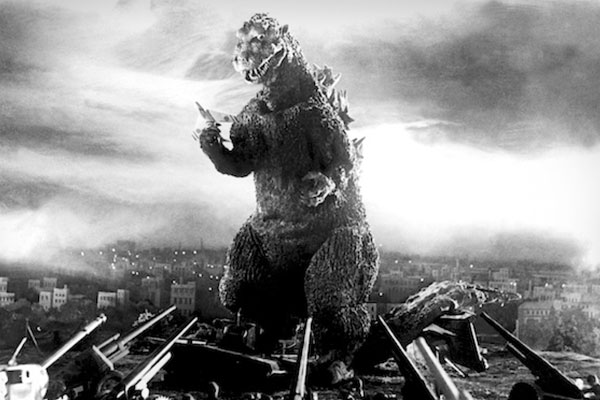 This month, after 60 years, Classic Films is re-releasing the original 1954 black and white Japanese film Godzilla (Gojira in Japanese). It is coming out at the same time as the latest ‘Godzilla’ movie, the 30th film of its kind. The original 1954 Godzilla was loaded with anti-American dialogue and its characters laid the blame for the emergence of Godzilla from the bowels of the earth on the dropping of atomic bombs on Hiroshima and Nagasaki and continued U.S. above ground atomic testing at the Marshall Islands, close to the coast of Japan (67 nuclear blasts there, including the first H-Bomb). The Americanized version of the film, issued in 1956, cut out all the atomic bomb references, slashed some twenty minutes of film and replaced it with ridiculous scenes of an American reporter (Raymond Burr) racing about Japan chasing Godzilla. The American producers decided that the U.S. was not ready for a look at the destruction of Japan through the eyes of the victims.

If yet another American remake of Godzilla was not enough, Japanese critics who have seen the latest movie are complaining loudly that filmmakers have made the fearsome Godzilla look fat.

The original 1954 film (also now on a CD with the 1956 American version by Criterion) about the very irritated Godzilla, who looks like a combination of a dinosaur and giant lizard and breaths fire from his enormous mouth, was remarkably well done, with superb acting, plenty of drama, vivid special effects (far better than other monster and horror films of the day) and a terrifying monster trudging all over Tokyo. The movie also has an absorbing love story about a young woman torn between her loves for two men.

The scriptwriters flog the U.S. for 94 long minutes and warn that if the U.S. (and the Soviet Union) do not halt nuclear tests many more Godzillas will reappear all over the world and destroy mankind. The nukes, the Japanese claimed, were the root of all evil (the movie opened just after a Japanese fisherman died from exposure to radiation while he sailed near an American nuclear test at the Marshalls).

If you were around in the mid-1950s, you saw the American version of Godzilla in theaters (and on television ever since), but that crudely and politically censored version eliminated all references to nuclear bombs and tests and laid the blame for the monster back on the Japanese.

In the Japanese 1954 Godzilla, in theaters all over the U.S. this month, a professor steps up shortly after several ships and a village have been destroyed by Godzilla and says that the Jurassic Era monster lived far beneath the sea in caverns of some kind, but was freed by the force of the two atomic bombs dropped on Japan. The bombs also radiated him, giving him enormous, and evil, powers. This was proved, the professor said, because Godzilla brought up sand that was radiated by Strontium-90, used in nuclear weapons. America is never actually named in the movie, but it is obvious that the U.S. is the villain in the story.

“How could we create such a thing?” one woman wonders about the bomb and Godzilla. When the terrified Japanese are herded into shelters, one woman says that she had to do that when Nagasaki was bombed, too.

The near destruction of Tokyo in a huge fireball is an obvious reference to the atomic destruction of Hiroshima and Nagasaki, although no mushroom cloud is shown.

The story centers on a petty Japanese girl, Emiko (Momoko Kochi), whose fiancée is an eye-patch wearing young scientist, Dr. Serazawa. She is also drawn to Ogata (Akira Takarada), a young salvage operator. She stumbles into the middle of the story and stays with scientists and government leaders throughout. The story is told through her eyes. It is a rough monster movie, but has a tender sub story about Emiko and her loves and the sadness of the scientists and professors about the emergence of the nuclear driven best from the depths of the earth.

The Japanese company that made Godzilla included wonderful special effects, effects far ahead of their time. We see Godzilla crush electric towers, trains, cars and whole neighborhoods as he strolls around different cities and, finally, Tokyo itself. He melts towers with his breath (the towers were made of wax). The panic of the crowd is legitimate, as is the nervousness of scientists and government leaders. The dramatic question is how do you kill a fifty meter high monster. Nothing seems to work. The military cannot kill it with machine guns, bazookas and artillery cannon. Neither and a large air force, that attacks him in Tokyo. How does the world get rid of Godzilla? Can it?

There are marvelous scenes of over eager media people reporting the story, female schoolgirls singing to God to be spared, the evacuation of cities and burning and sinking of ships. It appears as a very fresh movie; you would think they made the film on Tuesday.

The ’54 Godzilla is not just a monster movie, though. There is sad music throughout and the main characters are sad, too, sad about what was happening to their world and what might happen if atomic testing did not stop.

At the end of the film, Dr. Serazawa invents an ‘oxygen destroyer’ that many want to use to kill Godzilla, but he is reluctant to give it to the army. He tells friends that it has the same powers as nuclear weapons and the other countries might get their hands on it and start another war.

At the very end of the film, a professor on board a ship does not lament the death of the monster, but the future of mankind. “There might be others down there,” he said. “If we keep conducting nuclear tests…Godzillas will re-appear.”

The re-issued Godzilla was shown at the TCM film Festival in Los Angeles last month and at Film Forum, the New York City theater complex. It goes to theaters in numerous cities next week.

Godzilla followed a similar monster movie, The Beast from 20,000 Fathoms, made in 1953, about a monster that climbed out of the ocean after being freed from an ice block by atomic testing to terrorize the world. Dozens of movies about radiated monsters followed as filmmakers created an atomic / monster genre in the 1950s.

Godzilla drags all of the politics of the Cold War with him as he rumbles around Tokyo, knocking down everything in sight, in this re-issued and wonderful 1954 movie. It received considerable attention when it debuted in Japan in 1954, just two years after the end of official U.S. occupation of the country. It received none of that here --- at least back then.

Does the world love Godzilla? He is now starring in his 30th film, far more than any other monster. King Kong is small potatoes next to the big lizard from Japan.

Historians should take a look at the original movie not only to see what the Japanese did with the American nuclear attacks of their country, but to see a grand old monster movie, one of the best.