This Man Figured Out How to Keep Manufacturing Jobs in America

Beth Macy is the author of "FACTORY MAN: How One Furniture Maker Battled Offshoring, Stayed Local - and Helped Save an American Town." Her work has appeared in national magazines and The Roanoke Times, where her reporting has won more than a dozen national awards, including a Nieman Fellowship for Journalism at Harvard. She lives in Roanoke, VA. 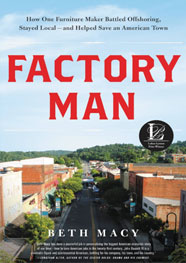 I did not set out to tell the history of globalization in America, I simply followed a set of pictures. A photographer friend and neighbor, Jared Soares, had been making the hour-long trek from Roanoke to Martinsville, Va., three times a week for more than a year. His photos were gritty and moving: church services and tattoo artists; a textile-plant conveyor belt converted for use as a food pantry dispenser; a disabled minister named Leonard whiling away the time in his kitchen in the middle of the afternoon.

That’s what it looks like when half the jobs in your community have been offshored; when you live in the home of the highest unemployment rate in the state for more than a decade; when 20,000 jobs in your region have vanished, chasing cheaper labor in Mexico, China and Vietnam.

That’s what happens when abandoned plants become targets for unemployed copper thieves trying to resell electrical casings on the black market, sometimes unintentionally setting the dusty brick behemoths afire. When the shell of Bassett Superior Lines burst into flames in 2012, a plant that had once been the most profitable furniture factory in the entire world — “we were printin’ money,” its longtime manager told me — this is the image I stumbled upon:

Displaced workers whose unemployment had long since expired, battling smoke fumes to pay their final respects, parking their cars and pickups across the road from the plant and getting as close as they were allowed. People who were now cobbling together a living cleaning houses, growing their own food and working part-time at Walmart.

“It hurt, like a friend passed away,” one told me. “You had worked for thirty-some years with your friends in that building and now, poof, it’s gone. It was like losing your home.”

When the backhoes were finished clearing the rubble, scores of former workers came back to pluck a commemorative brick.

Whither those long-term unemployed? That question was what first sent me to the once-thriving furniture and textile region of Henry County, Virginia. Given the realities of free trade, including NAFTA and China’s admission into the WTO, did the CEOs really have to gulp down what the mainstream economists, Wall Street guys and business schools were preaching about creative destruction and close every one of their factories? Did the CEOs really have to turn their backs on the families who’d for generations been busy helping make their families rich?

Ninety minutes west of Martinsville, in the mountain hamlet of Galax, Virginia — the birthplace of hillbilly music and home of arguably the most famous annual fiddlers’ convention in the world — a man named John Bassett III was proving that it was still possible to make furniture in America. He had re-engineered his plant, adopted lean manufacturing methods and invested in high-tech machinery. He deconstructed the dressers being shipped in at cut-rate prices from China, then struck his foreign competitors in their weak spot: Creating a seven-day delivery program, he pulled an offensive end-run around the four weeks it took the Chinese dressers to cross the Pacific in a shipping container. “The Chinese are not super people!” he boomed from atop a conveyor belt. “They cannot suck the ocean dry!”

As brash as he was inspirational, the third-generation furniture maker also journeyed covertly to rural northern China to see just exactly which factory was hurting him the most — and to get “eyeball to eyeball” with the company owner himself. He wanted to find out whether anyone at all was minding the back room of this new global store.

Then, from a Blue Ridge mountain town better known for bluegrass and barbecue, John Bassett filed what was then the world’s largest antidumping petition against the People’s Republic of China. He pressed his case with Washington politicians, with angry retailers and competitors, and, finally, with the U.S. International Trade Commission. Following a prolonged legal battle that was as volatile as it was expensive, he won a battle that culminated in the saving of his Vaughan-Bassett Furniture, a company with $90 million a year in sales — and the livelihoods of 700 workers in Galax.

With a fascinating but complicated hero at my story’s center, I set out to explain why more than 5 million workers lost their jobs over the past 15 years — and how trade-policy acronyms forged in faraway places like Washington, Doha and Uruguay eventually trickle down to small manufacturing towns across America. From the Chinese importer to the former rice paddy worker now working the rough end of a furniture factory in Surabaya, Indonesia; to a food bank operator in Henry County, Virginia — a man who can divine what people used to do by their disfigurements — I wanted to paint a holistic, nuanced portrait of “that giant sucking sound” predicted by presidential candidate Ross Perot before NAFTA was signed.

It turns out the fallout was less like a freeway sinkhole and more like a slow-motion collapse. And the national media grew bored with the complicated, long-drawn-out story, as it often does.

To bring these disparate geographic, cultural and historical threads into focus, I folded together three distinct narratives: the social history of one American industry; a family saga featuring one furniture-making family that took two very different paths in response to globalization; and the 300,000 American furniture workers who got left behind.

When wages in China, Indonesia and Vietnam continue to escalate and reshoring is the new manufacturing buzzword — and yet only a sliver of those offshored jobs have returned to the United States — it’s time to have a frank conversation about the biggest economic question facing Americans today: how to save jobs in the 21st Century.