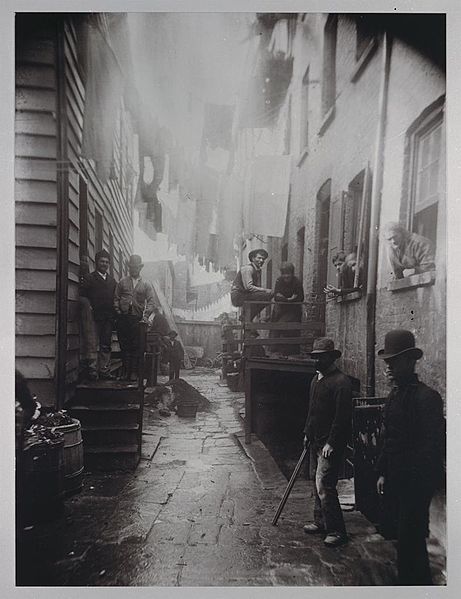 The crime ridden area of Bandit's Roost (1888) by Jacob Riis, from How the Other Half Lives.

Inequality seems to be on everyone’s radar these days. Barack Obama has declared it the “defining issue” of our time. The American public’s appetite for a 700-page book explaining the economics of inequality has Harvard University Press scrambling to fill orders. And the recent “Money Issue” of the New York Times Magazine weighed in on May 4, evoking Jacob Riis’s 1890 exposé of Lower East Side tenement squalor, How the Other Half Lives, with this cover headline:

“Rich City, Poor City: What it Feels Like to Have and Have Not in New York.”

The Magazine’s “Money Issue” is only the latest evidence that the collective distress over disparity is stimulating a revival of Progressive-era thinking: prominent historians, economists, and former government officials have all issued explicit calls for a return to Progressivism. The Magazine deserves close attention, however, because it captures various pitfalls of heeding that call if we don’t maintain some critical historical perspective. 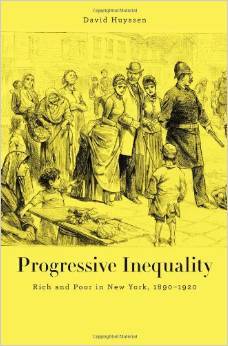 One reporter’s commentary, noting the political unlikelihood of large tax increases on the wealthy, stresses the equalizing potential of education, echoing (without invoking) Progressive-era philanthropists and educational reformers such as Andrew Carnegie, John D. Rockefeller, Andrew Mellon, and John Dewey. “The great income gains for the American middle class and poor in the mid-to-late 20th century,” he writes, “came after this country made high school universal and turned itself into the most educated nation in the world.”

This distorts history by conflating sequence and causation. Progressive philanthropists and advocates of universal secondary education, while providing avenues for individual social mobility, did not bring about widespread democratization. Workers’ movements, redistributionist programs, and protective labor legislation during the Depression preceded education as the cause of increasing equality, ensuring a more equitable division of wartime and postwar economic growth thereafter…in part through increased funding for education!

The mid-century educational boom, in other words, was primarily an effect, not a cause of economic leveling. In the earlier era of inequality, educational opportunities and the chance to take advantage of them remained off-limits for most Americans (and immigrants) for reasons of race, national origin, gender, and (most importantly, because it transcended all those categories) money. That is the case again today.

Another piece in the Magazine provides a glimpse into the life of teenagers in the Brownsville, Brooklyn projects. This article, “On the Brink in Brownsville,” updates How the Other Half Lives for 2014, presenting mostly bourgeois readers with alarming conditions—including domestic abuse in teenage relationships, violence as play, and normalized petty theft—in a low-income urban area.

Riis’s reports from the city’s “dark corners” may have launched the Progressive Era, but his lurid tales and graphic photographs of non-white delinquency also fed racist and xenophobic fears (it did not help that Riis was himself a racist). The Brownsville story falls into this Progressive-era trap. Its detached account of a black community’s apparent apathy to mob behavior, and its concluding anecdote of its black teenage subject’s smirking about plans “to hang out in the neighborhood again this summer”—absent any meaningful form of analysis—are like cattle-prods for racism.

A quick glance at Times readers’ online comments confirms this: the bulk of them, including the seven top “Reader’s Picks” as of Tuesday afternoon, spew bile about “sociopathology,” a lack of “discipline and purpose,” and “subcultures…based on laziness, stupidity, and an incomprehensible tendency to ‘blame somebody else.’ ” Without deeper insight into the political-economic roots of conditions in Brownsville, the Magazine’s story tends to incite reaction instead of inspiring intervention.

The cover story, meanwhile, describes “an exercise in ‘radical empathy’ ” between students at the $43,000-per-year Fieldston Ethical Culture School, and University Heights High, a public school in the poorest area of the Bronx. As the story explains, each student paired up with one from the other school, shared a story “that in some way defined them,” and then recounted the partner’s anecdote as if it were his or her own.

Bourgeois Progressives made similar, or even more ambitious attempts to meet New York’s working poor on “equal” terms. Some, such as Lillian Wald, moved to the Lower East Side to live among immigrant workers in settlement houses. Wealthy women, such as Alva Belmont and Anne Tracy Morgan (J.P.’s daughter), joined immigrant socialists Pauline Newman and Rose Schneiderman in the 1909-1910 strike of shirtwaist makers. That strike galvanized the International Ladies’ Garment Workers’ Union, one of twentieth-century New York’s most progressive organizations, and a forerunner to the CIO.

The cross-class mutual interests that emerged from such encounters between rich and poor New Yorkers laid much of the intellectual groundwork for the regulatory reform in public health, workplace safety, and urban zoning that most people think of as among the Progressive Era’s greatest successes in redressing inequality. So perhaps we should be glad that a more recent generation of the affluent and afflicted are reaching out to each other, and that the press is noticing.

But Progressive-era New Yorkers indulged in less inspiring exercises in “radical empathy” across class lines, and the Magazine’s story reflects these as well.

On Christmas, 1899, thousands of the city’s poor gathered on the arena floor at Madison Square Garden for a dinner of suckling pig and cranberry relish, courtesy of the Salvation Army. Meanwhile, as the New-York Tribune reported, “thousands of well-fed and prosperous people” paid a dollar each to congregate in the mezzanine and watch the poor eat. One organizer of the event declared, “It means the dawning of a new era, the bridging of the gulf between the rich and the poor.” Most newspapers celebrated the event in similar terms the next day.

Comparing this event to the Fieldston and University Heights exercise may seem unfair. The Salvation Army made little effort to mask the sheer class voyeurism of its Christmas Dinner, whereas the contemporary high schoolers shared personal stories and made honest attempts to inhabit each other’s experiences.

Yet for the Progressive-era New York newspapers and the Magazine’s May 4 “Money Issue,” the accounts of such cross-class encounters serve the same purpose: to offer their readers hope that the inequality gap might be bridgeable through improved education, empathy, or even proximity.

The Progressives have more valuable lessons to teach us. The fact is, despite decades of optimistic reformism, American income and wealth disparity continued to increase until the Crash of 1929. Progressive reforms made material differences in the lives of U.S. workers, but they failed in their larger goal of slowing or reversing inequality.

At the same time, those reforms necessitated the growth of the regulatory state. This provided the foundation upon which New Deal workers and reformers built to make real inroads against inequality—through legislation protecting collective bargaining rights, restraining the power of businessmen and financiers, and distributing the benefits of economic growth far more widely than Progressives ever dreamed possible.

Progressives never realized the full potential of the regulatory state to lessen inequality because they were too busy trying to change the behavior of the working class through educational reform, racist moral crusades in low-income neighborhoods, and empathy-building exercises. Rather than follow them down these well-worn paths, we should emulate—and improve upon—New Deal-era movements, using democracy to change the behavior that really needs changing: the wealthy’s.