July 4th Quiz: Was the Revolution Caused by a Misunderstanding Over a Word?

Thomas P. Slaughter is the author of "Independence: The Tangled Roots of the American Revolution" (Hill & Wang) and the Arthur R. Miller Professor of History at the University of Rochester. 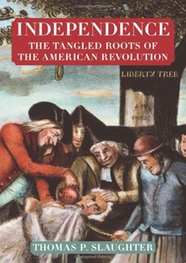 Americans are proud of our independence. It is not just the Day or the Declaration we celebrate, but the core cultural trait that we cherish. We want to share our independence globally, whether the Iraqis, among others, want it or not. We are so independent that we define community narrowly—the citizens of Trenton, New Jersey cannot borrow books from the Princeton Public Library thirteen miles away, which is in the same county and a branch of the county library system; Philadelphia’s public schools are not the problem of its suburbs, which are independent of it, as is true more often than not for city/suburban relationships nationwide. Some states, such as New York, have a publicly-supported mental health system with pretty good services for most citizens (although better in Brooklyn and West Chester than in Buffalo and Batavia), while some states, such as Virginia, have less robust services even for federal programs.

We are, in sum, independent of each other and many of us believe that we, as citizens and as communities, are not independent enough of the federal government, the United Nations, and any and all efforts to define community more expansively. America has imperial ambitions, but an independent culture resists our full participation as citizens of a nation and of a world that is integrated economically and environmentally. It matters to people in New England if states in the Midwest burn coal to fuel power plants; indeed, it matters in Nova Scotia, Newfoundland, Greenland, and Iceland, where the weather goes after it falls off the Weather Channel maps that end at Maine’s northern border. But listen to the complaints about the President’s intrusion into the independence of fossil-fuel producing states when the Executive Branch tries to regulate the air quality that affects global climate.

The expansive definition of independence, with its obverse of defining community narrowly, is not new but it is very American and pre-dates our existence as a nation. “If you ask an American who is his master,” Member of Parliament Richard Sutton observed in 1774, as others had for over a century, “he will tell you he has none, nor any governor but Jesus Christ.” This independent spirit was a central tension between the British Empire and its American colonists for 150 years and defined the conflict that led to the War for Independence in 1775 and its Declaration a year later. And yet, as late as May 1774, the Pennsylvania Committee of Correspondence would say, as the vast majority of colonists still would have, that “the idea of an unconstitutional independence on the parent state is utterly abhorrent to our principles.”

Many of the colonists crossed the Atlantic in search of independence from Europe—religious, economic, personal, communal, and political—and built their new lives on the backs of slaves and the land of Indians whose independence they stole. The colonists prided themselves on their independence, by which they meant that they were courageous, self-sufficient, and devoted to family, parish, village, and God’s higher law. They committed themselves to local relationships over distant ones and cast a suspicious eye on even their own colonial governments, which many of them considered remote and unrepresentative. Still, they sought to carve out this independence within, not apart from, the empire to which they proudly belonged.

Americans claimed their independence based on political principles imbedded in spiritual beliefs that led them to be less respectful of hierarchy than their monarch demanded, so when British officials accused Americans of being independent, they used the term pejoratively, meaning chronically rebellious and insufficiently attentive to the greater good of the Empire. In 1699, New York’s Governor Richard Coote (the first Earl of Bellomont) had lectured the assembly on its “Independence from the Crown of England. . . . You need not be told to what degree Faction and Sedition have taken Root in this Town, ‘tis a thing so generally known.” According to attorney Charles Bowler of Newport, Rhode Island, who wrote in 1758, “Many of these people think themselves Independent, that the King and Parliament of Great-Britain, have no more Right to make Laws for us, than the Mohawks.” And yet, they considered themselves loyal subjects of the British Crown.

Living at such a distance from the locus of authority made colonists even more independent over time than they were when they or their ancestors crossed the Atlantic. Distraction and neglect by the British imperial ministries before 1750 nurtured this independence, which habits on both sides of the ocean entrenched. Then, as the colonies’ domestic economies and population grew, as colonists expanded their settlements into North America’s vast interior and became ethnically heterogeneous, they developed identities independent of the one that tethered them to the British Empire and to their provincial capitals back East. In 1746, after the British had seized Canada from the French in the War of the Austrian Succession, the Duke of Beford feared that if it were not returned, which it was at the war’s close two years later, the lack of a powerful enemy on their border would create among Americans “an independence . . . in those provinces towards their mother country.” For similar reasons, the British Empire sought to slow the march of colonists westward with the Proclamation Line of 1763 and other regulations, but failed.

Colonists continued to strive for independence within the Empire, while British administrators continued to believe that the colonists were aiming at independence from the empire. New York’s Governor Thomas Tryon believed as late as August 1773 that it would be a “great injustice to America were I to hold up an idea that the bulk of inhabitants wishes an independency” from the British Empire. The tipping point came in 1774 and 1775, when a critical mass of colonists started to believe that they were losing their independence, while the imperial ministries were fighting to keep the colonies from becoming independent, from separating from the empire.

The rhetorical confusion is as much ours as theirs, but it does help to distinguish between independence and separation, for they were not the same in the minds of colonists before the late spring and summer of 1774. It is difficult to identify before then more than a handful of colonists who advocated separation from the British Empire, although many imagined that a separate nation would eventually arise organically in North America, given the colonies’ economic and demographic growth, and that their descendants would conquer the continent. As late as April 1774, the worst case that John Adams could imagine was the next generation facing a war for separation. “I am of the same opinion that I have been for many Years,” Adams wrote, “that there is not Spirit enough on Either side to bring the Question to a compleat Decision.” Adams underestimated his fellow colonists’ independence and the British Empire’s determination to bring them under control.

The Boston Tea Party provoked a stern response and neither side was willing to compromise on the principles that divided them. While British officials had accused the colonists of “aiming at independence” for over a century, by January 1775, Lord Lyttelton shared the views of others in the House of Lords about the Americans, that “the whole of their deliberations and proceedings breathed the spirit of unconstitutional independency and open rebellion.” It was, he thought, “time to assert the authority of Great Britain” lest inaction “bring about that state of traitorous independence, at which it was too plain they were now aiming.” While Lord Chatham, William Pitt believed as late as January 1776 that “independency was falsely charged on” the colonists, as it long had been by imperial officials who misunderstood the Americans.

As the American ideology of independence has made its way west, it has been carried to extremes by the likes of Clive Bundy, Jerad and Amanda Miller, and the Tea Party Movement, which finds its roots in the Revolutionary era. Others believe that the globe is now too small for America’s eighteenth-century notions of independence. The question for all of us is about the limits of independence and the borders of our community--not just whether we are our brother's keeper but who are our brothers and sisters, where our responsibility extends, and whether our village now embraces the globe.