Historians in the News
tags: religion, myths, Fourth of July 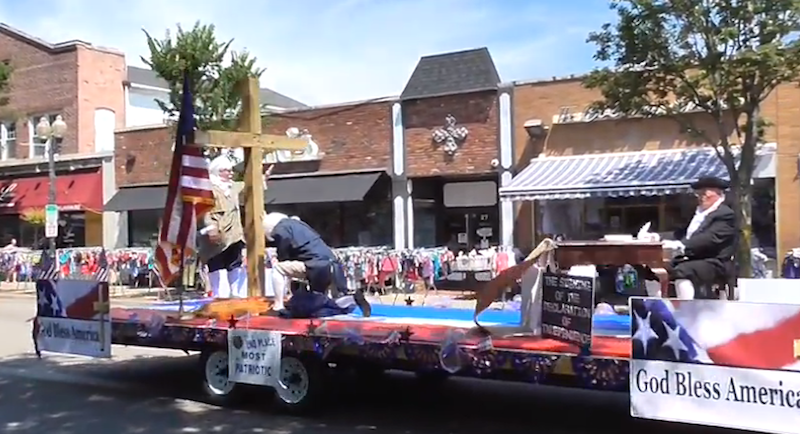 On July 17 Bill Bernstein, a retired history professor from SUNY Canton, has set off a storm of debate on Long island after he criticized a float in the Patchogue Independence Day parade.  In a letter to the editor of Newsday he wrote:

I attended an Independence Day Parade put on by the Village of Patchogue with bands, floats and antique cars ["Having a blast," exploreLI, July 2]. It was indeed enjoyable.

One float, however, was disturbing. It was from the Patchogue Lions Club and had a "1776" theme. There was a Thomas Jefferson figure dressed in Colonial garb with a quill pen writing at a desk, as well as several other Founding Fathers standing and talking, presumably at the Constitutional Convention. And then there was a Benjamin Franklin figure standing next to a 7-foot-tall cross emblazoned with a large caption, "God Bless America." The sides of the float also had crosses with the same caption -- seemingly so we wouldn't miss the message.

As an American, I'm offended. The float implied that there is a state religion. This is a gross misreading of history. Our Founding Fathers believed religion to be a private matter and state religion abhorrent. America would be a country with no established religion. Indeed, Americans had fled those kinds of repressive regimes for freedom of religion here and declared it with our most precious document: a First Amendment guarantee.

We need to stop these displays of nonsense history. They teach our children nothing and they denigrate our national traditions.

This prompted a garage of letters in the following week:

I take exception to the letter writer's remark that as an American, he was offended by this float. The float did nothing but depict an important time in history. It did not allude to any state religion. It certainly did not besmirch our national traditions, and the children on the sidelines saw a bit of history with no editorial comments.

I was shocked by the letter that objected to a parade float that included the words "God Bless America." Religion has been entwined with American history since Pilgrims fled religious persecution. The Declaration of Independence, written by Thomas Jefferson, mentions the word "God" in the first sentence, and "Creator" in the second.

Our founders also took pains to establish the freedom of religion in the First Amendment. And one of the first actions of the newly formed U.S. Senate in New York in 1789 was to form a committee to seek out a chaplain. Three of my ancestors fought in the American Revolution, two of whom were shot during their service. They fought for American values: freedom and tolerance. It's disturbing that some people today want tolerance shown to them, but seem unwilling to extend it to others.

I was a little taken aback by the criticism of the float. The Lions Club, which sponsored the parade but not the float, does a tremendous amount for charities. I feel the writer is more offended by the cross and the words "God Bless America" than the float's portrayal of our history.