The Marx Brothers Are Back! 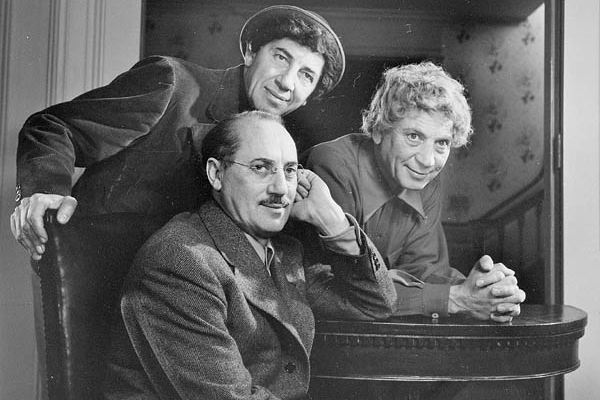 The very first Broadway play starring the legendary Marx Brothers comedy team was I’ll Say She Is, that opened in 1924 and ran for 330 performances. Two more stage works followed the musical, Animal Crackers and Cocoanuts. The latter two were made into successful movies and made the four brothers international superstars, but I’ll Say She Is, deemed more of a plotless revue than a play, was not. It has languished in a desk drawer for ninety years.

Now it is back, and with a roar, as part of the New York Fringe Festival. The inimitable Marx Brothers are back with it. Hallelujah!

I’ll Say She Is was brought back by the tireless efforts of Noah Diamond, who stars in it as Groucho, and Margaret Farrell, the great granddaughter of one of the play’s composers. It is a sturdy vehicle, works well as a play and serves as yet another treasure for Marx Brothers lovers, and there are millions of them.

What makes I’ll Say She Is, that opened last weekend in New York at the newly restored Sheen Center, so good is the staging of the play, sequined chorus girls still dancing and prancing in it, and the sensational performance of the magnetic Diamond as Groucho. Diamond is a wonder. He has all of Groucho’s memorable moves down pat – the walk, the talk, the dancing, the strutting, the moustache, the ever widening eyes and even that marvelous head tilt of Groucho’s.

The show is a delight. The simple plot is the story of a wealthy heiress who runs a newspaper ad for a man to thrill her. The Marx Brothers arrive at her mansion to do that, after wrecking her dining room. Their romance of her, all over New York, from ballroom to opium dens to police stations, is filled with music by Will B. and Tom Johnstone. Except for the opening title song, which is pretty good, the songs are forgettable. Then again, all the songs in all the Marx Brothers movies were forgettable. Who cares about songs when you can watch the Marx Brothers cut up on stage or screen?

The same is true here. The four comedic giants rumble all over the stage, firing off a hundred one liner jokes, interrupting everybody’s conversation and chasing every woman they see (and yes, thy do cut off someone’s tie).

The acting is first rate. The actors who play the other three other Marx brothers, Seth Shelden as Harpo, Robert Pinnock as Chico and Aristotle Stamat as Zeppo, are a trio of good actors and do a fine job of backing up the effervescent Diamond as Groucho. Director Trav S.D. gets more fine work from Melody Jane as the flighty heiress and Kathy Biehl as the stodgy heiress mother (a traditional character in all Marx Brothers films.

There is a lot of history in the play. You learn about the religious zealots of the 1920s who carried “Redemption” and “The World Will End” banners, learn some New York City Roaring Twenties history, listen to a number about greedy tycoons on Wall Street (nothing has changed there). They make fun of politicians, too.

The show has its weaknesses. Like all Fringe Festival plays, it has a bare bones set. The large screen the actors perform in front of is dull and the colors are terrible. The sound in the theater, especially towards the back, is a bit muffled. These criticisms are small, though.

The play has standard chorus girl songs, such as the opener, and others that seemed a bit ahead of their time, such as a number in which the heiress uses the four arms of herself and the man behind her.

After ninety years, the jokes are as funny as ever, the zingers just as sharp and the endless chasing just as hilarious.

It might not be the time for a Marx Brothers movie, but the play ought to be revived on Broadway by somebody. It is not a tired old gem at all, but a restored treasure, overflowing with comic gold.