UCLA’s New Cover Girl: Guess Which Far Leftist It Is!

Ron Radosh is a PJ Media columnist and Adjunct Fellow at the Hudson Institute. He is working on a book on the presidency of Warren G. Harding. 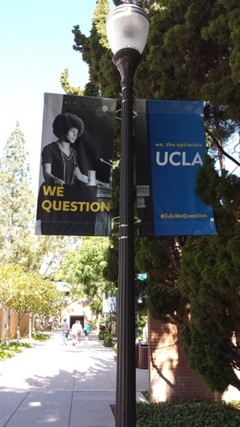 Look whose photo graces the campus of UCLA, meant to be an inspiration to incoming students. The woman in the photo is standing above the slogan: “We Question.” On the right-hand side, in small letters, students are informed that they are “the optimists.”

This banner adds to the shadow that today is cast over so many of our major universities.

For those who can’t identify her, the photo depicts Angela Davis, the notorious former Communist Party USA leader who, beginning in the ’60s, molded together black nationalism with Marxism-Leninism. She created a heady brew for recruiting new cadre into the CP and the original Black Panther Party of Huey Newton.

Some optimist! Davis believed in the triumph of Communism.

For her loyalty to the Soviet Union and its foreign policies, in 1972 she was awarded a Lenin Centenary Medal in the Soviet Union, after which she spoke to thousands at an outdoor rally in Moscow. Next, speaking at a factory in Kirov, Davis praised the workers for not using “products of labor [to fuel] the irrational drive for capitalist profits as it is used in our country.”

As she left Moscow and went up the stairs to enter her plane, she yelled out with a clenched fist: “Long live the science of Marxism-Leninism.” There is not an iota of evidence that she questioned anything about the dreary reality in the Soviet Union and their Eastern European client states.

Davis also received the International Lenin Peace Prize — formerly called the Stalin Peace Prize — from the STASI state of East Germany in 1979. She was awarded it for supposedly strengthening “peace among peoples,” but it was actually for her continued fidelity to the Soviet bloc, which to her represented the future of humanity.

Not only did she not “question” authority, Davis openly defended the repressive measures of the Communist states by endorsing their imprisonment of dissident intellectuals. When the Soviet Union invaded Czechoslovakia to crush the movement for “socialism with a human face” that the citizens of the country believed they could pull off without Soviet intervention, Davis strenuously supported the invasion that was forthcoming.