Winston Churchill: Back and as Feisty as Ever 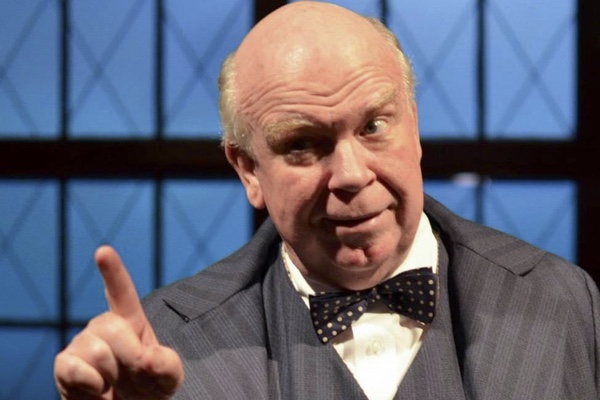 When you go to see a one man show about British Prime Minister Winston Churchill you cross your fingers and hope for the best. It is very difficult to portray someone as well-known as the heavy set, hard drinking, witty and ever determined Brit who has to go down as one of the twentieth century’s – no, history’s – most remarkable world leaders.

Can the actor capture Churchill’s personality? Can the playwright get across his iron determination, his love of Franklin Roosevelt and hatred of Adolf Hitler? Can an actor make himself look like the very memorable Churchill? Can anyone make the 1940s come alive some seventy years later?

Ronald Keaton does it and does it well in Churchill, that just opened at the New World Stages, 340 W. 50th Street, in New York. Keaton is a delight as Britain’s wartime leader in Churchill, written by Keaton and nicely directed by Kurt Johns. Keaton brings the English leader back to life in an admirable show that is extraordinarily informative.

The one man show starts very slowly with Churchill talking about his painting and then moving into his biography. The play rolls along quietly until, about twenty minutes later, Keaton’s Churchill begins to talk about his wife, Clementine. A huge photo of Clementine is shown on stage, in the middle of Churchill’s handsomely recreated study and the play picks up steam. Keaton suddenly becomes a very human Churchill, not just the historical figure, giving us a behind-the-scenes, very personal look at the British politician.

About twenty minutes later, the drama picks up even more steam when the harsh, grating voice of Adolf Hitler is heard on a radio and Churchill delivers a savage indictment of the Fuehrer, a bitter, biting denunciation. Then about twenty minutes after that, Churchill meets Franklin Roosevelt and practically falls in love with him, telling the audience how much he was grateful to Roosevelt for all the help he gave Britain before the U.S. actually entered World War II.

The play has all of the famous Churchill quotes, from Democracy being the worst form of government, except for all the others, to his fabled “we shall never surrender” speech to his line about how he was willing to meet his maker, but was uncertain if his maker was willing to meet him. The well-known historical figures are all in the show, from Neville Chamberlain to David Lloyd George and Joe Stalin. The much written stories about how the British public froze Churchill out of government for years, and his Boer war and Indian war battles, are all chronicled in the show. Much is made of how he sat on the sidelines as Hitler rose to power and how he was practically the only person in the United Kingdom who saw Hitler as the demon that he was prior to World War II. There is a touching segment about the evacuation of the British army from Dunkirk, in France, at the start of the war.

The play does not go very deeply into World War II and skips over the post war politics of England, which brought about Churchill’s defeat at the polls in 1946 (talk about an ungrateful nation!). There is not a lot about his marriage, other than thin stories and warm anecdotes. There is little about British politics in the 1930s and that is something that is needed. The inability of politicians to understand Hitler was one of the factors that caused World War II and little is made of that fact. The rumblings of Britain’s multi-party system and coalition governments needed to be addressed, too.

The show succeeds, though, and mightily, because of the personality that Keaton infuses into his character. His Churchill is witty and bright, troubled and downright vicious at times. He loves his whiskey, and his Roosevelt, is remorseful for the Gallipoli battle of World War I, in which so many died, and disgusted with several English leaders. There is a nice humanity in his performance. He shows Winston Churchill as a brilliant and powerful man but, at the same time, a man who gets down on all fours and oinks like pig in family interplay. There is warmth to the Prime Minister that brings out his best sides

The play could be a bit more comprehensive. There is little here about Churchill’s remarkable leadership in mobilizing Britain for World War II or his famed depressions. The problem, though, is that you would need a few days, not just about two hours, to tell Churchill’s entire story. Keaton picked the highlights and low points rather well and, at the end, leaves you with an admirable portrait of a man who suffered many, many defeats throughout his life before achieving his one great victory, the world’s one great victory.

One thing that stands out in the play is the thanks given to the U.S. for its alliance with England in World War II, a friendship that started with the Lend Lease Act and other policies and continued until 1945, and continues now. Another admirable part of o the play is the gratitude that Churchill has for the Royal Air Force, the legendary RAF, that defeated the Luftwaffe high in the skies over England in the early days of the war.

Churchill’s story unfolds on a smart set designed by Jason Epperson that has a table, chairs, painting easels, wide windows and, at the start and finish, a heroic Union Jack flag. Keaton wanders about the set, much as Churchill must have wandered about his home, telling his long story (there fabled parrot is not there, though. Pity.). Johns did a fine job of keeping the action in the play constant, which is hard to do in a one man show.