Anthony Clark, a former speechwriter and legislative director in the U.S. House of Representatives, was responsible for hearings and investigations of the National Archives and presidential libraries for the Committee on Oversight and Government Reform in the 111th Congress. This article is excerpted from his new book, “The Last Campaign: How Presidents Rewrite History, Run for Posterity & Enshrine Their Legacies.” 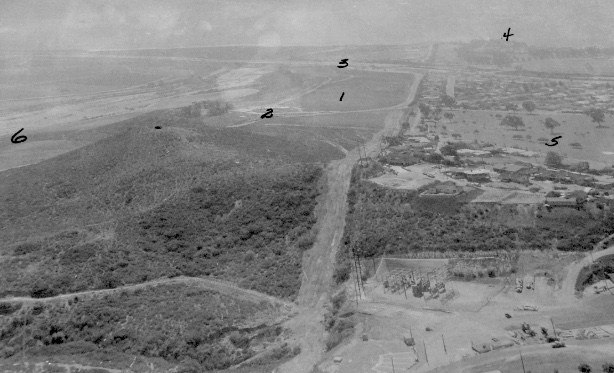 Just a few months into what would be his first, and only full, term as president, Richard Nixon already was preparing the way he would enshrine his legacy. Nixon had a secret plan to build his library.

He wouldn’t place his monument to himself next to his small birthplace, as had three of his predecessors – Herbert Hoover, Franklin D. Roosevelt, and Dwight Eisenhower. He wouldn’t seek out a university campus to give him legitimacy, or rely on bold architecture to add gravitas, as did John F. Kennedy and Lyndon Johnson.

Obsessed with his place in history, Nixon needed to acquire a location that, in and of itself, would command respect – awe, even. He had the exact spot picked out, and it was spectacular: vast, open, California wilderness, miles of stunning beaches, and magnificent views of the Pacific Ocean. Its setting alone would trump all past, and likely future, presidential libraries. The only thing preventing Nixon from realizing his vision was something that, in so many other parts of his political life, he never let stop him: it would not be legal.

The Presidential Libraries Act of 1955 prohibits the use of federal land for a presidential library, and that presented a problem: Nixon’s perfect site just happened to be on federal property. Worse, the exclusive parcel was, inconveniently for Nixon, in the western part of Camp Pendleton, one of the country’s largest Marine Corps bases.

Occupying eighteen miles along the Southern California coast and more than a hundred and twenty-five thousand acres between Los Angeles and San Diego, the camp was – and is – the main training base for all West Coast Marines. Vital to the mission and readiness of the Corps – particularly those then training to go to southeast Asia – the Marines did not want to give up a single acre or a foot of shoreline. The Department of Defense (DoD) protested that Nixon’s plan would “severely handicap” military functions at Camp Pendleton, pointing out that during 1970 alone, more than 77,000 Marines trained in the specific area of the base that he wanted. 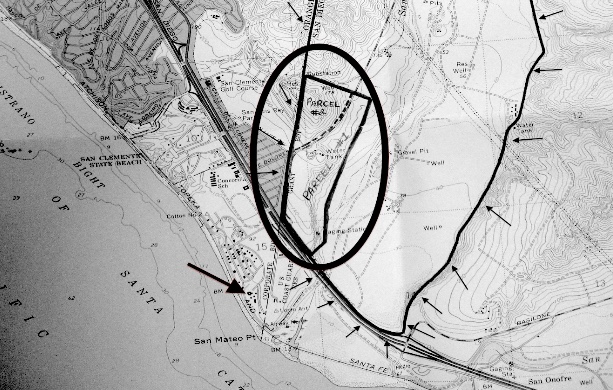 When Congress got word that the president desired to transfer the land – but not that he wanted it for his library, only for a state park, the cover story – it prohibited the sale, lease, or transfer of Camp Pendleton without further congressional authorization.

Nixon, along with All the President’s Library Men – which included H.R. Haldeman, John Ehrlichman (the chair and vice chair, respectively, of the Nixon Library Foundation’s board of executive trustees), Donald Rumsfeld, Fred Fielding, and John Dean – went ahead anyway. They wrested thousands of acres and miles of beach away from the Corps, enlisting the National Archives and Records Service, the General Services Administration, and even the United States Secret Service in hiding the fact that he planned to build his library on the stolen land.

Like many of Nixon’s plans to circumvent the law, this one included a cover-up. Unlike many of his plans, though, the cover-up had been part of the strategy from the start. While Nixon’s plan wasn’t fully successful, the cover-up lasted for more than forty-five years – until I discovered hundreds of pages of evidence in what was then known as the Nixon Presidential Materials Project at the National Archives facility in College Park, Maryland. 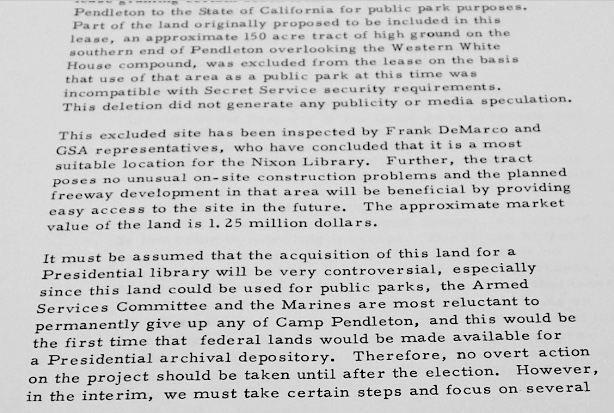 Detail of undated draft memo from John Dean, September or October, 1971. From the Nixon Library.

Since a large piece of the process could not be secret – the transfer of the parcel to the state of California – an alternative reason for removing the land from the control of the Department of Defense (DoD) would be required. So Nixon simply created a new federal bureaucracy to cover up the land transfer: the Legacy of Parks program, and the related Federal Property Review Board. Ostensibly, the program reviewed “underutilized or unutilized federal property” with a view toward transferring it to the states, local governments, or private interests, for development as parks, recreational facilities, or historic monument purposes.

The board examined properties across the country while focusing strongly on Camp Pendleton. The Legacy of Parks program – touted to this day by Nixon partisans as one of his signature domestic achievements – purposely diverted attention, providing a plausible alternative narrative for why the president was trying to transfer such important, and valuable, land.

Reviewing the president’s daily diary and reading the White House tape subject logs, at first I was surprised at how often Nixon and his advisors would meet and talk about the plan for the library at Camp Pendleton on the same day – sometimes at the same time – as they discussed major subjects and momentous events, such as the Watergate break-in, the Pentagon Papers, and the war in Vietnam.

But then I realized that the president wasn’t switching back and forth between serious matters and a trivial one; he constantly returned to his plans for the library while in the midst of these historic events because that’s the way he constantly viewed them, in real time: how he would be seen by history, and how his actions would contribute to his legacy. In that library, in that dramatic setting, he would tell his story of his administration: the story that was unfolding even as he was planning to tell it.

Thanks to a carefully-negotiated agreement with the administration of then-Governor Ronald Reagan, the federal government eventually leased the land to California. Only Watergate and the president’s hasty exit from office put a halt to the scheme, which never was fully realized.

Just the first part went into effect, and the land is now a state park. Visitors enjoy year-round camping at the San Mateo campground – near the planned site for the library – and surfers from all around the world come to one of the finest places to hang ten, San Onofre State Beach.

While he encountered some bumps along the way, today the Nixon Library likely would be located on this beautiful piece of land, on the coast next to La Casa Pacifica, his Western White House, were it not for the fact that Nixon resigned the presidency in disgrace.

Owing to the difficulties he encountered in the aftermath, it took Nixon sixteen more years, and no fewer than five rejected locations, for him finally to open his presidential library on a compact, nine-acre site next to his boyhood home, just like three of his predecessors. Though, instead of the grand Roosevelt Estate in Hyde Park, the lovely 186-acre National Historic Landmark park in Hoover’s West Branch, or the neat, orderly, “main street” campus in Eisenhower’s Abilene, the Nixon Library today is surrounded by the strip malls, highways, and closely-packed Spanish colonial homes of inland Orange County, California.

By the summer of 1974, the secret plan had unraveled in the turmoil of the Watergate investigation. On July 27, while walking along the beach that was to have framed the priceless view of his now-lost library there, Nixon received word that the House Committee on the Judiciary voted 27-11 to approve the first of three articles of impeachment against him.

Perhaps seeking to buck him up, or simply refusing to believe the inevitable, on August 8, during a “hastily-convened” meeting, members of the Nixon Foundation board, which in the spring of 1973 had put the library “on the back burner,” voted to restart its plans.

The next day, Richard Nixon resigned the presidency.

On a hot July afternoon in 1990, he finally opened his presidential library, gathering with family, friends, administration officials, and presidents George Bush, Ronald Reagan, and Gerald Ford (Jimmy Carter demurred) to dedicate the facility. One that was not encircled by four thousand acres of California wilderness. Not with sweeping views of the ocean. Not on the dramatic site he and his advisors worked so diligently, for so long, in secret, to secure. But in Yorba Linda, his birthplace. 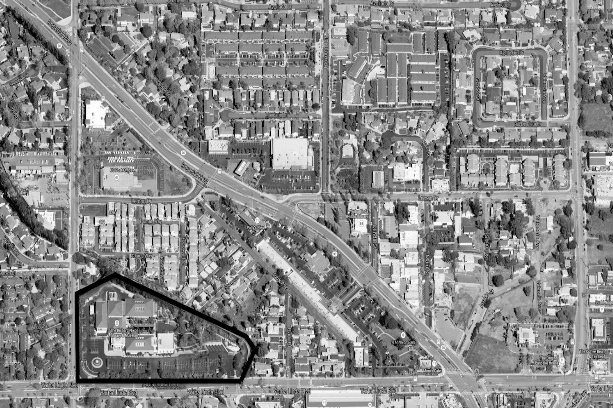 There is a lot more for us to learn, buried within the records.

Eight months after Nixon fled to San Clemente, on April 29, 1975, the first wave of refugees from Vietnam began arriving next door. They later would be resettled, welcomed by communities across the country. Through the end of the year, 50,000 exiles from the war that Richard Nixon had promised to end, but instead escalated and intensified, would come through Camp Pendleton. While there, the men, women, and children who escaped the fall of Saigon with nothing but the clothes on their backs were housed in a tent city on what had been the proposed site for the Nixon Library.