So You Think You Know Ike? William Ewald Did

Yanek Mieczkowski is the author of “Eisenhower’s Sputnik Moment: The Race for Space and World Prestige” (2013), “Gerald Ford and the Challenges of the 1970s” (2005), and “The Routledge Historical Atlas of Presidential Elections” (2001). He is professor and History Department Chair at Dowling College in New York. 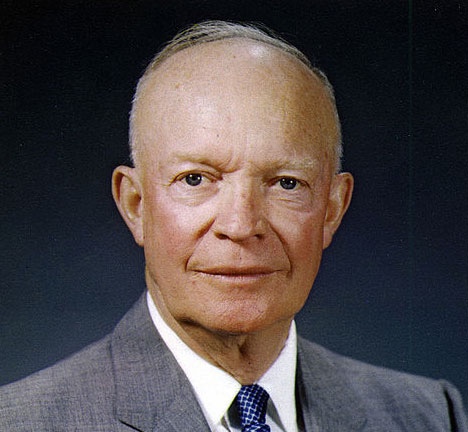 One of the last surviving members of Dwight D. Eisenhower’s presidential administration has died. On Monday, March 16, 2015, William B. Ewald, Jr., who was 89 years old, passed away in his hometown of Greenwich, Connecticut.

I got to know Bill Ewald while I was researching my book, Eisenhower’s Sputnik Moment: The Race for Space and World Prestige (Cornell University Press, 2013), relying on him as a font of information and recollections about Eisenhower. Luckily, I live about an hour away from Greenwich, and I interviewed him a number of times over the years, often over lunch at Greenwich’s Centro restaurant.

Holding a Ph.D. in English from Harvard University, Ewald could quote great works of literature and history, and he had the kindness and generosity to share his knowledge. More central to my research, he had special insight into Eisenhower. His official title was then Assistant to the Secretary in the Department of the Interior, although the bulk of his duties was speechwriting—“but nobody was ever called a ‘speechwriter’ ” back then, as he explained. During the 1960s, he helped former president Eisenhower write the two-volume memoir of his presidency, Mandate for Change, 1953-1956 and Waging Peace, 1956-1961. (Ewald later published his own presidential biography, Eisenhower the President: Crucial Days: 1951-1960, which appeared in 1981.) As he wrote about Eisenhower’s tenure in office, Ewald relived that eight-year period, with the result that few administration alumni knew the era as well as he. But Ewald experienced much more. During Eisenhower’s retirement, he worked closely with the five-star general at his Gettysburg College office, experiencing a new decade and its events while observing a historical figure at work and leisure.

Ewald collaborated with Eisenhower at a time when the Cold War loomed large over international affairs, taking a turbulent turn when the U.S. entered the Vietnam War. Occasional incidents reminded him of how imperiled these times were—and how Eisenhower had averted conflict during the previous decade. In October 1962, during the Cuban Missile Crisis, President John Kennedy and his aides often telephoned Eisenhower to give him updates. Ewald recalled that “we were all up there in Gettysburg, editing the first draft of [the] memoirs, sitting around a table with all this paper and pencils and looking back on history.” Frequently, Eisenhower’s secretary interrupted their work to tell him that the White House was calling. Ewald said, “He’d get up instantly, go out, go to his office and take the call. And we’d sit around and wait till he came back.” The former president never disclosed the contents of the calls. Instead, he sat down to resume work and asked, “Okay, where were we?” But one call was different. Eisenhower reentered the room and said, “Boy, that was good news.” Ewald remembered, “That’s all he said. I don’t know what it was that had happened, but you could see a burden had dropped, and he was elated.”

What struck Ewald the most about the crisis was that Eisenhower “never said one word about his contribution to the solution.” Eisenhower had put in place the elements that enabled Kennedy to stare down the Soviets: He had approved development of the U-2 spy plane that detected the Cuban missiles; he had supported the Polaris submarine missiles that were mobile and invulnerable, allowing the U.S. to dismantle its intermediate range missiles in Turkey, a concession the Soviets demanded; he had built a powerful arsenal of intercontinental ballistic missiles—far superior to the Soviet Union’s—imposing weapons that forced Russia to back down. “The three things that Kennedy had in his back pocket that Ike bequeathed to him, he never once mentioned,” Ewald marveled. Although Eisenhower refused to trumpet his achievements, Ewald reminded people of them. He once wrote to historian and Kennedy advisor Arthur Schlesinger, Jr. and pointed out that Eisenhower’s quiet groundwork allowed Kennedy to prevail in the crisis. Schlesinger wrote back and acknowledged that it was true.

Ewald had an indirect encounter with another Eisenhower successor. In the summer of 1965, he had just finished mowing the large lawn at his Greenwich home when the phone rang. With sweat pouring off his brow, Ewald listened as the caller explained that he was telephoning from Washington, where he worked for William Bundy, the assistant secretary of state for the Far East and Asia. Bundy was developing Lyndon Johnson’s Vietnam War policy, the official said, “and what I’m calling about is Eisenhower’s commitment to [former South Vietnamese President Ngo Dinh] Diem, to stand behind him.”

“Well, what are you calling me in Greenwich for?” Ewald asked. “I don’t know anything about a ‘commitment,’ and I sure don’t have the papers. And not only that, I’ve never heard of any such commitment.”

Afterward, Ewald thought that Bundy’s aide might have been “fishing for some document that had not yet come to light” from the 1950s, a hypothetical Eisenhower pledge to back Diem. Such a vow might have helped Johnson rationalize the war that was starting to drag down his administration and the nation. But Eisenhower never tied America’s destiny to South Vietnam the way Johnson did, and resented any intimation that he had. Quite the contrary, he scrupulously avoided getting stuck in Vietnam. Ewald remembered a press conference in February 1954—three months before France’s disastrous defeat at Dienbienphu—at which a reporter asked Eisenhower whether sending U.S. technicians to Indochina might draw America into war there. He replied, “I would just say this: no one could be more bitterly opposed to ever getting the United States involved in a hot war in that region than I am; consequently, every move that I authorize is calculated, as far as humans can do it, to make certain that that does not happen.” Ewald remembered that after the U.S. got mired in Vietnam, New York Times columnist James Reston recalled Eisenhower pledging that he would put no U.S. soldiers “in that elephant grass ten thousand miles from home.” Reston commented, “Smart man. I wish Kennedy and Johnson had been half that smart.” Ewald noted that the remark represented “quite a turnaround” for Reston, an erstwhile Eisenhower critic. The words reflected a movement whereby pundits and scholars began to reappraise the Eisenhower presidency more positively.

Ewald’s extensive work with Eisenhower allowed him to witness the renowned leader’s human side as well. For example, Eisenhower loved to cook. He had favorite dishes, like beef stew (the recipe for which a military aide “guarded with his life in a safe”) and steaks (“he was very particular about how the steaks were cooked”). Preparing pancakes for the Secret Service was a special event, and “he’d be out there in the kitchen with his apron on and the [agents] would be sitting at the table with their knives and forks ready.” During one breakfast, the president noted that the same plate kept coming back to him for more flapjacks. “It turned out there was one Secret Service agent—must have been a huge guy—who’d eaten seventeen of his pancakes,” Ewald recalled. Eisenhower called it “the best tribute” to his cooking that he had ever gotten. In addition to channeling his creative energies, cooking also provided balance to the Eisenhower marriage. First Lady Mamie Eisenhower was no chef, and the president once groused, “When Mamie and I got married, the only thing she knew how to make was fudge. And goddamn it, after fifty years, it’s still the only thing she knows how to make!”

Another trait that Ewald observed was Eisenhower’s temper. The former president was furious to learn that John Kennedy planned to host Pakistani President Mohammed Ayub Kahn at George Washington’s Mount Vernon home for the first-ever state dinner outside the White House. For Eisenhower, it was bad enough that Kahn was a dictator, but to hold such a celebration at his idol’s home was too much. His blue eyes glowing with anger, Eisenhower fumed over the “sacrilegious, goddamn” stunt his successor was pulling. “His face got red. He was furious with this desecration,” Ewald recalled. But in typical Eisenhower fashion, the blast of rage quickly subsided. Laughing, he said that his doctors told him to keep his temper in check, and he settled down.

Ewald once found himself the target of what he called Eisenhower’s “Bessemer furnace.” The general was punctual, and during the process of drafting his memoirs, work began at precisely 8:00 AM each day, although Ewald and the other writers and editors toiled late into the evening, often until midnight. One morning, he and a Doubleday editor walked into the office at 8:03. Irritated, Eisenhower looked up and said, “You boys may work late, but you get up late, too!” Although the former president meant it as a reproach, Ewald remembered the first half of the remark fondly. Eisenhower almost never said thank you or gave compliments. “He never praised anything that I can recall I did,” Ewald said. “And yet, what you really treasured in that relationship was something different.” Eisenhower made his staff feel that whatever they were doing—such as working on a memoir—was of transcendent importance, taking great time and energy from everyone and producing a result that would have significant impact. “And it kind of raised you up in the clouds to think of yourself in that kind of a context,” Ewald recalled. Thus, that one remark—“you boys may work late”—constituted “the highest compliment I ever got from Dwight Eisenhower,” Ewald said. “Because what it showed you was, in the back of his mind, he really did know how hard we were working for him, and [he] appreciated it.”

Ewald lived long enough to see the planning begin for perhaps the greatest tribute to his former boss, a memorial in Washington, just a block away from the Great Mall. When the Eisenhower Memorial Commission began formulating plans for the project, they debated a theme the monument should convey, soliciting views from administration alumni, including Ewald. “And my feeling was that the thing to emphasize about him was his internationalism. He was an American internationalist,” Ewald said. Throughout his experiences as Allied commander during World War II and then a two-term president, “the thing uppermost in his mind was the collective defense of Europe with U.S. participation,” Ewald said. “That was the key principle. And I think that, as much as anything, demonstrates where his heart was.”

Eisenhower’s internationalism might have been his greatest legacy, but William Ewald left his own deep imprint as well. A gifted writer and eloquent speaker, he worked in the Eisenhower administration and then had the unique opportunity to review its history with the principal actor, a soldier and statesman whom he revered. To the end of his life, Ewald had a vivid recall of Eisenhower and his presidency, and he was generous with his recollections. He was a treasure—as a friend and as a historian’s window to the past.