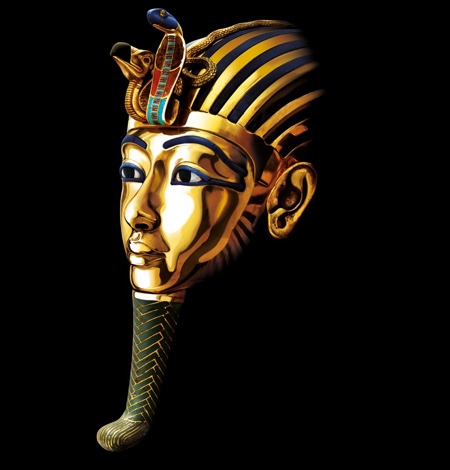 It has been nearly 100 years since Howard Carter and his team of archaeologists discovered the tomb of Tutankhamun, the boy King of Egypt who died in 1323 BC at the age of 19. It has been nearly four decades since exhibits of King Tut’s gaudy treasures toured the United States, 37 years since comic Steve Martin sang his beloved song about Tut and nearly ten years since a series of medical tests were run on his mummy and his DNA tested, to see if he was murdered in some bizarre plot. Yet, after all this time, the boy Pharaoh from the Valley of the Kings retains his star persona and remains the number one entertainment attraction in America – lapping Disney World in historical interest.

The latest traveling “Discovery King Tut Exhibit,” with over 1,000 recreated pieces of Tut’s treasure, opens at the Grand Rapids Public Museum, 272 Pearl Street, NW, in Grand Rapids, Michigan, this week after a six month long run at the San Diego Natural History Museum and a six month stop in Kansas City. Eight million Americans viewed the Tut exhibits of actual artifacts on its seven city tour in 1976, a number that astounded cultural experts at the time.

Specials on the Boy King on the various History Channels, Discovery Channel and other venues have drawn impressive numbers, even when up against Two Broke Girls and Keeping Up with the Kardashians. King Tut, after 3,300 years, is still the number one attraction on the Midway, the Beatles in chariots, Lady Gaga on a pyramid.

“He is very popular. Our ticket sales were over 120,000, even at $27 a ticket. Our revenue ran some 15 to 20% higher than expected. The reaction here was fantastic,” said Dr. Michael Hager, the director of the San Diego Natural History Museum, recent host to the Tut exhibit.

Why the fascination with the King who died so long ago and really, in his short ten year reign, did very little?

Dr. David Silverman, head of Egyptology at the University of Pennsylvania and one of the world’s leading experts in the field, thinks that Tut is such an attraction for a variety of very unusual reasons.

“It is all history,” he said. “When his tomb was discovered in 1922 World War I had just ended and the world was depressed over it and looking for some good news. And, suddenly, there is the excavation of the unknown tomb of a boy King, filled with unbelievable treasures. It was the most remarkable archaeological discovery ever. Then a curse falls on many of the people who were involved in the discovery. Intrigue and mystery, right? Then the big traveling exhibit in 1976 comes in the middle of an economic recession in America and people are again looking for some light in the dark and here comes the Tut exhibit.”

Silverman shrugs when the murder of Tut is mentioned. “They did several investigations and DNA tests and they all pointed to different conclusions,” he said. “But people love that idea. Look at all the murder shows on TV. The murder possibility gave Tut another dimension.”

He thinks that Egypt itself has an allure to it that fascinates people. “It began back with Napoleon’s conquest of it and the discoveries his engineers made. We see Egypt as dark and mysterious, full of ancient wonder. King Tut is a part of that. I think everybody has seen at least one of those Mummy movies set in Egypt. There was The Egyptian, The Ten Commandments, all the Cleopatra movies. You even have those crazy TV series about Egypt, like Ancient Aliens. The country intrigues us.”

Silverman chuckled. “You know how I became intrigued by Egypt? When I was a kid, eight or nine years old, I saw the movie The Egyptian. I was just hooked on ancient Egypt after that. I did not become an Egyptologist because of a visit to the pyramids or hundreds of hours reading in a library or studying hieroglyphics. It was Hollywood,” he said.

Hager, from the San Diego Museum, thinks that today’s technology spreads the word on Egypt’s history, too. “One of the big reasons for this fascination with Tut is social media. You can go on You Tube and click on dozens of documentaries about him. You can flip on any number cable channel for more of them. These venues connect a lot of people to the Tut story who might not be interested in history in general.”

Hager thinks that people see Tut as a real person, too. “He was a sick man. He probably had malaria and some other illnesses. He had to use a staff or cane to walk around. People feel for him,” he said.

People do not seem to care that all of the artifacts in this exhibit are recreations. “I met several people who saw the real artifacts on the ’76 tour and they all said these recreated pieces were more educational because there are nearly a thousand of them and the whole exhibit is far more detailed and comprehensive than the other,” said Hager.

Dr. Silverman said that most of the actual artifacts are no longer permitted to leave Egypt. “You just could not do the ’76 exhibit again. By recreating so many artifacts, though, you give people who see them in this exhibit a much better idea of what life in Egypt was like and how Tut’s tomb appeared. So, in some ways this exhibit is even better,” he said.

Visitors to the Grand Rapids exhibit will see a well-made video story about the discovery of the tomb by Howard Carter that introduces them to the entire experience. Then they walk through more than 15,000 square feet of various exhibits. “There is a scene in the video where Carter first sees the tomb just jammed with artifacts. My wife joked that it looked like our garage,” laughed Hager.

It takes just about two hours to see the entire exhibit. Museums offer audio phones to visitors. The museum is really two stories – King Tut and Howard Carter – museum curators say. “One is as interesting as the other,” said San Diego’s Hager.