The Trans-Pacific Partnership in Historical Perspective

Richard Drake is the author of The Education of an Anti-Imperialist: Robert La Follette and U.S. Expansion (University of Wisconsin Press). He is writing a book about the historian Charles Beard. 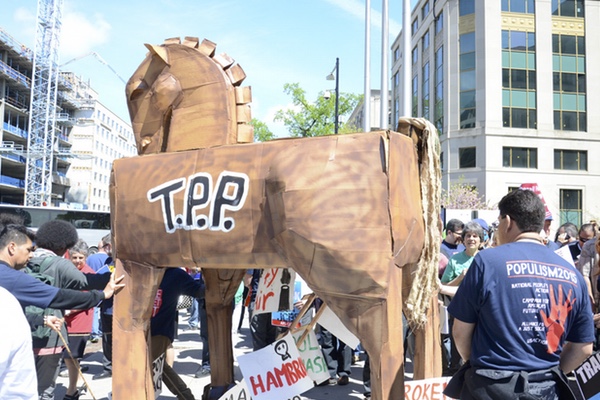 The Trans-Pacific Partnership (TPP) trade agreement looms as yet another tactic designed to implement a corporate capitalist strategy for managing the world’s wealth. Though nineteenth-century economists and historians as diverse as Karl Marx and Brooks Adams had identified global capitalism as the fundamental economic reality of modern times, the precise strategy for which TPP provides standard tactical implementation first appeared as part of the League of Nations agenda set by the victors at the end of World War I. Financial elites since then have been fertile in devising expedients for centralizing economic power under their absolute control in an investor-centric world order. The grand financial planning at the Bretton Woods Conference during World War II and the many predecessors of TPP, such as the Clinton-era NAFTA agreement, reflect diverse aspects of the historical pattern unveiled at the Paris Peace Conference in 1919. 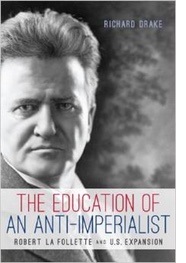 Progressive Republican Senator Robert M. La Follette deserves to be remembered today for his pioneering opposition to the corporate capitalist strategy aiming at the degradation of labor. A critic of postwar U.S. foreign policy generally, he particularly objected to the League’s economic agenda, which bears a striking resemblance, in its effects for American labor, to the most recent blueprints for the globalized economy. In a 29 October 1919 Senate speech, he wondered why this international body had been assigned responsibility for tasks traditionally handled by nation-states.

For instance, by the terms of the treaty work laws would come under international supervision. La Follette warned, “Now the vice which goes to the very root of all the labor provisions of this proposed treaty is that they provide for the enactment of labor legislation by the secret and undemocratic method by which treaties are made.”

La Follette worried about the likely fate of American workers in a world controlled by the international bankers and financiers who had dictated the terms of the economic agreements at the Paris Peace Conference. To their immediate economic disadvantage and ultimate destruction, Americans working in factories and on farms would be competing against foreigners without union protection or benefits.

Despite all the evident signs of disadvantage for American workers under the proposed labor regime, President Wilson insisted that a golden age would follow its adoption. The President, La Follette sarcastically observed, had made so many bold claims about the benefits for American workers of the League’s plan that “many Senators, taking literally the prophesy [sic] of the Chief Executive, have expressed fear lest these betterments should be of such magnitude that they should smack of the forbidden fruit of Bolshevism.”

To strengthen his case against foreign influence, La Follette quoted Chief Justice John Marshall, from Schooner v. McFadden: “The jurisdiction of the nation within its own territory is necessarily exclusive and absolute. It is susceptible to no limitation not imposed by itself.” La Follette reasoned from Marshall’s premise that “this whole international structure is so obviously beyond the contemplation of the Constitution of the United States, which granted certain powers to the Government and expressly reserved all power not so delegated to the States and to the people that I shall not dwell upon that phase of the subject.”

La Follette did dwell on Section 2, Article 427 of the treaty, called by Wilson “labor’s charter.” He once again begged to differ with the President: “In my judgment, this portion of the treaty sheds a flood of light upon the whole scheme for regulating labor conditions throughout the world, and indicates the impossibility of reconciling such an undemocratic scheme with American principles.” It worried La Follette that the charter contained no labor Bill of Rights.

Gompers had proposed such a measure, but what La Follette called “these elementary principles of freedom” had been rejected by the Commission on International Labor Legislation, to which belonged two representatives from each of the five great powers and five representatives elected by other nations at the Peace Conference.

As a gesture to the Americans, Gompers had been elected unanimously to the presidency of the commission and then had found himself outvoted on nearly every proposition that he submitted. When told that the work of the commission was done, Gompers and the rest of the American delegation had left Paris. Then, however, the commission reconvened itself and continued the assault on labor standards.

The plenary session of the conference went even further in downgrading workers’ rights. The conference delegates, responding to their politically regnant constituencies at home, La Follette continued, wanted “uniformity in the conditions of labor throughout the world.” This meant low wages and as little attention as possible to labor conditions. Though “glittering with ornamental and seductive phrases,” the charter of labor meant disaster for working people with anything to lose. American workers, he thought, stood to lose the most.

“Mr. President,” La Follette said in concluding his speech, “in our modern era of a highly organized industrial society, the movement for democracy in industry is tending to supersede at many points the old struggle for political democracy.” Yet tycoons controlled the basic industries of the nation. The labor articles in the treaty would give this master class unprecedented power. La Follette wanted the nation to take a different direction, toward real democracy. Wilson with his treaty claimed to be strengthening international relations, which La Follette wanted as well, but not if exploiters the world over controlled the process for their own ends.

The United States Senate voted down the Versailles Treaty and with it the labor charter of Wilson’s ecstatic endorsement. The free-market utopia of a labor force entirely controlled by free-floating international capital had been checkmated. Another war would revive its prospects, but anti-utopian resistance continued as well.

Even after La Follette’s death in 1925, his ideas about the plutocratic aims of American foreign and economic policy persisted as an important theme in the country’s politics. The Progressive, originally La Follette’s Magazine, kept faith with the founder’s principles. Under the iconoclastic editorship of Morris H. Rubin, the magazinequestioned the official explanations about the seminal economic planning begun at the Bretton Woods Conference in July 1944.

Although the International Monetary Fund and the International Bank for Reconstruction and Development had been presented by their Bretton Woods creators as agencies devoted to the public interest, Rubin and his colleagues expected that the primary task for both of these institutions would involve faithful service to the power elite. Labor and agriculture leaders had not participated in the conference. That meeting had been devoted completely to the wishes of the international bankers.

Among Rubin’s writers, Oswald Garrison Villard spoke the most forcefully against the postwar economic status quo. A former editor of The Nation, he had been an ardent La Follette ally. If the Versailles Treaty had been “wicked, imperialistic, and land-grabbing,” he wrote in August 1945, the current postwar settlement presented an even more appalling display of imperialist greed and arrogance, the verbal incantations to democracy and human rights notwithstanding: “The way has now been lost as World War I was lost at Versailles.” Hitler’s world-historical depravities did not keep Villard from wondering if, at bottom, the war had been about anything but the appropriation of other people’s markets, territories, and resources—in keeping with all wars. The cartels still ruled and now, following the wartime centralization of political power in Washington, they had a vastly more dominant and intrusive government to assist them.

La Follette and Villard translated into political action the intellectual argument of one of America’s greatest historians, the unjustly neglected Brooks Adams, destined ever to languish in the shadow of his famous brother, Henry. In his classic protest against the triumph of plutocracy, The Law of Civilization and Decay: An Essay on History (1895), he lamented the tragic consequences for Western peoples of a world economic order in which they must compete with peoples living by Asiatic standards. He predicted that Western peoples would be crushed by their economic overlords. Capital, unhampered by patriotic sentiment, would seek out the most poorly paid labor in the world, in order to maximize profits. Without even considering here the accomplished or approaching ruin of European economies, the millions of American jobs recently lost to the trade deal tactics of globalization strategists illustrate Adams’s prophetic warnings and the need for a continuous resistance along the lines marked out by La Follette.