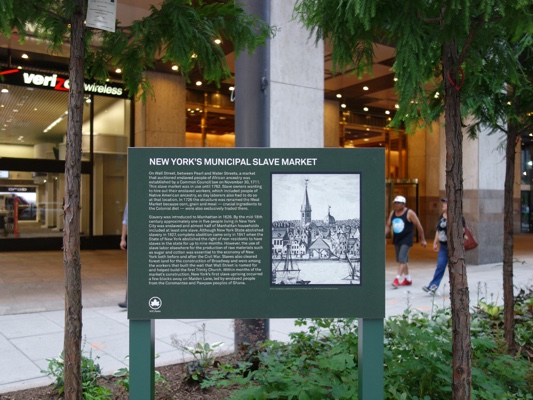 Rememory is a word the Nobel Prize-winning author Toni Morrison used for historical events that have been lost and recovered.

On June 27, 2015 an original building was remembered. A plaque commemorating the slave market that stood in New York City on the East River at Wall Street was planted in the soil, erected at the site of the original building.

A Brooklyn councilman, community leaders, activist students and other New Yorkers contributed to making the city aware of its past. The mayor and his wife gave a speech at the dedication and an award-winning poet recited a poem to lost colonial-era ancestors and history, but none of these events were enough. So much more has to be done to recognize the contributions of people who passed through the slave market.

The plaque marking the site on Wall Street between Pearl and Water Streets was proposed by Brooklyn writer, artist and activist, Christopher Cobb. The language for the plaque was crafted by the New York City Parks Department and the City’s Landmark Preservation Commission, with assistance from Christopher Moore, former director of the Schomburg Center for Black Culture, the research branch of the New York Public Library in Harlem. Many people contributed directly and indirectly.

The plaque is important because when we lose a landmark, one such as the slave market, an image we can see at the Skyscraper Museum on Battery Place in New York City, it may be lost to history. When we lose a landmark we cannot see, smell and touch, it is necessary to create a truthful, dramatic experience that tells the story. Rememory. The artist, Kara Walker, created a dramatic installation in the sugar monument at the Domino Sugar Factory on New York’s East River in Brooklyn. Authors Sven Beckert, Eric Foner, Edward E. Baptist, Anne Farrow-Joel Lang-Jenifer Frank, and Michelle Alexander and others retold stories of wealth and growth in the western world in their recent books about slavery.

For years, I wrote about the slave market and other monuments in New York. But what struck me was the timing of the installation of the plaque, given what happened in Charleston, South Carolina when nine black people were struck down by a white supremacist in a domestic terrorist attack in their church at a Bible study group. President Barack Obama closed his eulogy to the struck down minister, Rev. Clementa Pinckney and the eight others, by leading not only the congregation, the city and the state but also the nation and the world in an inspirational rendition of “Amazing Grace.” But that tribute too was only a beginning. There is so much about American history that so many are unaware of.

Among the surprising commentaries surrounding the devastating event in Charleston was a television interview with a spokesman for a Confederate group, former Georgia congressman in the U.S. House of Representative and an actor on the Dukes of Hazard TV show. He said this about American slavery: “Slavery, it ain’t like it was a Southern sin. It was a national American sin. It built Wall Street and the American economy.”

So what did he mean? Let us reflect on what is said on the newly installed plaque, called, “New York’s Municipal Slave Market”:

On Wall Street, between Pearl and Water Streets, a market that auctioned enslaved people of African ancestry was established by a Common Council law on November 30, 1711. This slave market was in use until 1762. Slave owners wanting to hire out their enslaved workers, which included people of Native American ancestry, as day laborers, also had to do so at that location. In 1726 the structure was renamed The Meal Market because corn, grain and meal – crucial ingredients to the Colonial diet – were also exclusively traded there.

Slavery was introduced to Manhattan in 1626. By the mid-18th century approximately one in five people living in New York was enslaved and almost half of Manhattan households included at least one slave. Although New York State abolished slavery in 1827, complete abolition came only in 1841 when the State of New York abolished the right of non-residents to have slaves in the state for up to nine months. However, the use of slave labor elsewhere for the production of raw materials such as sugar and cotton was essential to the economy of New York both before and after the Civil War. Slaves also cleared forest land for the construction of Broadway and were among the workers that built the wall that Wall Street is named for and helped build the first Trinity Church. Within months of the market’s construction, New York’s first slave uprising occurred a few blocks away on Maiden Lane, led by enslaved people from the Coromatee and Pawpaw peoples of Ghana.

The South Carolina terrorist said he chose Charleston, South Carolina because it is the most historic city in his state. He said he was out-of-his-mind when he read that at one point in history there were more Negroes in South Carolina than there were whites. It was no accident that he attacked one of the most historic religious institutions not only in the South but in America -- the Emanuel African Methodist Episcopal Church (AME), founded by enslaved, free and abolitionist African Americans, including Denmark Vesey, who rebelled against slavery in 1822.

We wonder what the terrorist would say if he read that at one point in Early American history, in 1650, the number of bondaged African Americans in New York was second only to the number in South Carolina, and in New York there were rebellions in 1712, 1741 and other years. So let’s review the words of the Wall Street plaque. Good people have to be aware of history because evil people are paying attention. (Maybe today someone will finally make the formerly enslaved abolitionist Denmark Vesey movie that filmmakers have been trying to make for so many years.)

My intimate knowledge of some of the ancestors in New York, having researched genealogy and combed the records for a book, is vivid. My maternal great-grandmother was Elizabeth Hunter of Jamaica. Governor Robert Hunter, British Royal Governor of the British Colonies in New York and New Jersey from 1710 to 1720, and Governor of the British Colony in Jamaica from 1727 to 1734 was her ancestor. The slave market was established under his watch. When Governor Robert Hunter was in New York, before he went to Jamaica, he was integrally involved in overseeing the monies used in the Colonies. He petitioned Queen Anne to have a smaller denomination of money for the merchants and their customers and decried what he called the “hard usage” of colonial African Americans.

I ignored Governor Hunter on our family tree, even after I found the genealogical records, but he resurfaced in my New York research when I researched entrepreneurial African American potters, and my Scottish and African American ancestors in Colonial New York. By hard usage, he and other colonials meant the use of free African Americans labor to transport the timbers that built ships, buildings and military forts in the city. The free laborers also built the businesses of the variety of entrepreneurs who owned them as enslaved people.

So view the plaque’s words, owners . . . hire out their enslaved workers. These and other slave owners were not average individuals; they were business people who hired out the humans they held in bondage. They not only pocketed the money their slaves earned and used the money to build a fortune, they also used the people’s free labor to build their own businesses. When President George Washington landed on the East River, a few blocks from the site of the former slave market where slavers still traded humans, he must have seen the hard usage. The Founding Fathers and Financial Founding Fathers owned slaves. They built the banks and created the nation’s currency. Enslaved people built the industries that built New York.

So view the plaque’s words,the use of slave labor elsewhere for the production of raw materials such as sugar and cotton. The profits from sugar and slavery were not only produced elsewhere and used to build banks and businesses on Wall Street as the plaque says, but there were sugar mills at the edge of Wall Street. These New York merchants’ major commerce at the time was human cargo and sugar, imported from the Caribbean Islands. The sugar was stored in New York’s sugar houses owned by its leading families; sugar was refined in the refineries, and profitable liquor shipped to the other colonies and to Europe. A “Sugar House” stood on the south side of Liberty Street at Cedar Street, adjoining the Dutch Church, and another one stood one block north on Cortlandt Street in the 1700s. Liberty Street Sugar House was owned by Peter Livingstone, a merchant, and the adjoining one by John Van Cortlandt, a merchant. These and other names cover Manhattan, Bronx and Brooklyn. There were major sugar factories in Brooklyn, and that is why Kara Walker’s sugar installation is so significant.

Profits from sugar, cotton, slavery and slave ships created fortunes. Entrepreneurs who used free slave labor as “hard usage” were called merchant, sea captain, tavern owner, brewer, lawyer, minister, politician, governor, mayor, distiller, vintner, doctor, baker, shopkeeper, shipowner, silversmith, sailmaker, victualler, cordwainer, watchmaker, insurer. The whole insurance industry worldwide was started and built on slavery. Edward Lloyd started Lloyds in his storefront in London in 1688 when he posted the list of ships and took bets on which ones would survive. Insurance was a main business of the men who sat in the taverns on and surrounding Wall Street and who traded at the slave market. The American insurance industries from Aetna to Hartford have their roots in Wall Street-financed slavery.

This is the place where the economic, social and civic foundations of the nation originated. Tenant farmers from the Hudson Valley supplied the colonial city with produce at the Oswego Market on Broadway. The farmers protested the inequities and unequal treatment by one of New York’s largest landowners, Stephen Van Rensselaer IV, in 1845. The Stock Exchange at Wall and Broad Streets was formed in 1792, and there was already an Exchange, the first Exchange on the East River at Broad and Dock Streets, today’s Pearl Street. This is the site of the current slavery plaque. That site has been a trade location since the era of the Dutch and the British, when shipping and slavery were the world’s major commercial businesses.

The wealth that empowered the colonists to revolt against Britain during the American Revolutionary War came from the labor of people who cleared the forests, built roads. The governors bargained with the Mohawks and other Native Americans upstate, whose timbers were transported by slaves to the city.

View the plaque’s words,enslaved people from the Coromatee and Pawpaw peoples of Ghana. I have documented ancestors from the 1600s and 1700s who were Coromantees from Ghana, West Africa. I researched and traced how they survived, how they received the name, Coromantee. Koromantyn was the name of the village from which they came.

This plaque recently placed on Wall Street describes people who have deep roots not only in America, but also in the world.