This Is What the Media Forgot to Mention About Magna Carta

Dr Gillian Polack is a medieval historian, editor and novelist as well as a lecturer. She has been published in both the academic world and the world of historical fiction. Her most recent non-fiction book, released this June, is The Middle Ages Unlocked (Amberley 2015), co-written with the archaeologist Katrin Kania. The book explores a wide range of topics, revealing the complex tapestry of medieval England and the people who lived there. 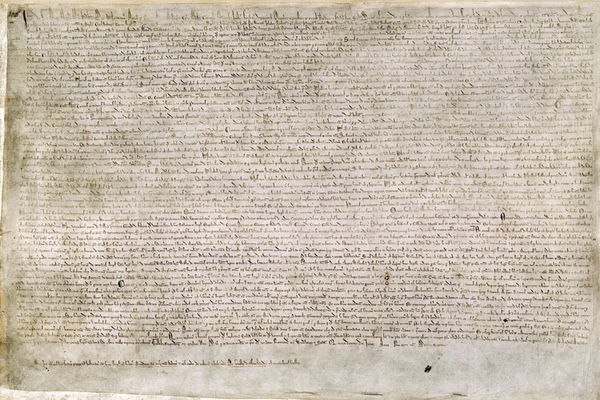 This year has some major medieval milestones. In June, for instance, we celebrated the signing of the Magna Carta in 1215. We make milestones, and they make us. We create them in order to reinforce something important to our culture. These things are not always what the original event was about.

Take the Magna Carta, for instance. The emotional pull of the Magna Carta is far more than the sum of its parts. To the general public it’s a big and important document that still holds sway and reminds us of the society we dream of. It’s our cultural code for fundamental principles as due process and rule of law. It’s seen as a symbol of liberty and celebrated as one of the pivotal documents that enabled us to create our modern selves. The history of the document however, and the history of charters in general, is far more complex and interesting.

It was not the first written document of its kind.

After the Anarchy 1135-54, where Stephen and Matilda lived the Game of Thrones dream and, along the way, devastated England, there was a breakdown of the rule of law. It was so bad that when Henry II came to the throne, he undertook a great many reforms. Currency, tax, legal systems: he tried to make England as stable as possible as quickly as he could.

One of the easiest ways of doing this was to remind people that “We weren’t always the Anarchy. Once upon a time we had rule of law and stability and all the things we yearn after now.” So he did that. One of the ways he reminded people was through a single document, where he explained the king’s role, lucidly and in a way that reinforced the sense that civilization had returned. One of the techniques Henry used to establish this sense of a return to what was good in the past was by saying that this or that would be done as in the time of his grandfather, Henry I. It saved words, and explanations, and provided a sense that the unstable period was gone. This was the original grandfather clause, and when I was in the business of advising on legislative matters, I learned that Henry was the original grandfather. So many legal systems rely on grandfather clauses. We rely on assumptions that things can be the way they were. We rely on them for freedoms, for social pacts, for stability. We rely on them for so many things. Some of these things do not rest on the literal history of the document.

The history of charters is complex, as are the charters themselves. What is important here is that there is a history. That liberties and the duties of royalty did not begin with the Magna Carta. It was one stage. It has become the most important stage for us, now, because of attributes we imbue the document with, not because the earlier documents were lesser ones.

Today, we attribute certain things to the Magna Carta, and they are how we explain it, but the charter has its own story. The Magna Carta was linked very much to Henry II’s charter because it was John’s version of Henry’s charter and Henry’s charter rested on his grandfather’s charter. John was making a statement about his reign and what he would do. Various great and good people decided that this statement was insufficient. John’s deficiencies as a king rather helped them make their point and so the charter was changed, with the changes formalized in 1215, giving us the first accepted version of the Magna Carta. Jockeying for power was as much a part in its making as fundamental parts of our societies such as due process, trial by jury, Habeas Corpus and equality under the law. The Magna Carta may have sown the seeds of these things, but only the seeds. It also sowed seeds of considerable discord in England: its legacy was, in the thirteenth century, very mixed.

What interests me about the Magna Carta is not its provisions, but its influence. Most people nowadays don’t really know or care that it wasn’t the first. It was, for them, when everything changed. When the rule of law became standard and when human rights were properly negotiated for the first time. That’s what we celebrated this June.

We didn’t celebrate universal peace and equality. The Magna Carta didn’t give that. It didn’t prevent rebellion and the breakdown of civilized behavior in England. Within a few years of it the “Mad” Parliament sat at Oxford (1258), followed by fighting and destruction of property and murder and all kinds of unlawful things. The Magna Carta did not usher in respect and prosperity for all. It especially didn’t usher in respect and prosperity for the Jewish community, but that’s another story, for another day.

To us, however, it’s important. It remains important even when we locate it clearly in its historical place and time and realize its limitations.

It’s still with us. Sections of the Magna Carta are still in operation in judicial areas today in various parts of the Commonwealth. Different aspects of the Magna Carta remain in different legal jurisdictions that use Common Law. It changed over time, but it has been a legislative survivor in many places. I’d love to see a map of which portions are still in force and where. The Commonwealth is a big place and comprises many countries, so it would be a very interesting map indeed.