The Man Who Saved the Manhattan Project

Michael Hiltzik, author of Big Science,is a Pulitzer Prize–winning journalist and author who has covered business, technology, and public policy for the Los Angeles Times for three decades. He currently serves as the Times's business columnist and hosts its business blog, The Economy Hub. His books include The New Deal, Colossus, Dealers of Lightning, and The Plot Against Social Security. Mr. Hiltzik received the 1999 Pulitzer Prize for articles exposing corruption in the entertainment industry. This article is adapted from Big Science: Ernest Lawrence and the Invention that Launched the Military-Industrial Complex(Simon & Schuster, 2015). 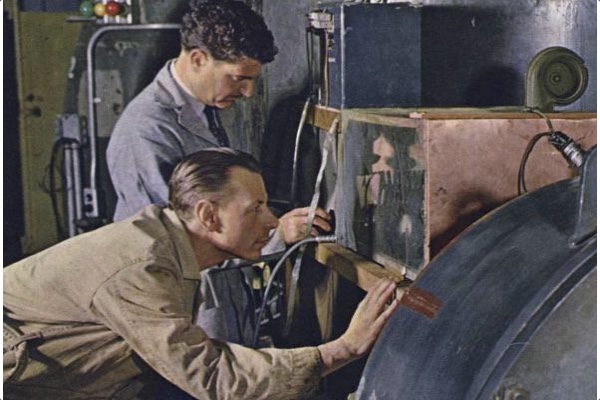 The 70th anniversary this summer of the atomic bombing of Hiroshima and Nagasaki revived the debate over the morality of the U.S. government's decision to drop the bombs. But one oft-overlooked aspect of the Manhattan Project is how close the bomb program came to cancellation because of high-level doubts that the weapon could be developed in time to affect the war -- and how it was saved by one man's persuasive argument that it could. 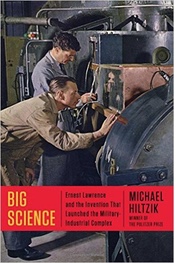 That man was Ernest O. Lawrence, the Nobel prize-winning Berkeley physicist who was then the most famous native-born scientist in America. Lawrence's fame stemmed from his invention of the cyclotron, a uniquely powerful atom-smasher that he had conceived in 1928. Over the next decade his Berkeley-based Radiation Laboratory became a world center of high-energy physics. Although he was doubtful at first that his marvelous machine could have any wartime application, he had been keeping his eye on the research program established by Franklin Roosevelt after receiving Albert Einstein's 1939 letter, advising that the discovery of fission in the uranium nucleus implied the possibility of new weapons and warning ominously that Nazi scientists might already have started working on them.

Lawrence was unhappy at what he saw. The government's Uranium Committee had quickly become bogged down in the bureaucratic secrecy imposed by its chairman, Lyman J. Briggs, director of the National Bureau of Standards. Physicists working on one aspect of fission were denied access to research on different aspects, even those relevant to their own. The bottleneck frustrated scientists up and down the line, giving scientists the feeling they were "swimming in syrup," as the Hungarian physicist Eugene Wigner put it. Lawrence urged Roosevelt's top science advisors, Vannevar Bush of the Carnegie Institution and James Conant, the president of Harvard, to "light a fire under the Briggs Committee." Instead they had grown convinced that from a military standpoint, fission was a dead end. Because there was no point in funding research unlikely to have an impact on the coming war, they were on the verge of canceling the uranium program outright.

What the Americans did not know was that scientists in Britain were making much more progress on the fission problem. There, physicists were able to share more data among themselves than the Americans through personal contacts. As a result, they were making startling discoveries that only underscored the constraints faced by their American colleagues. By the summer of 1941, they had concluded that fission bombs could be produced by the end of 1943 and therefore were "likely to lead to decisive results in the war."

G.P. Thomson, head of the MAUD Committee, the U.K.'s counterpart to Briggs's panel, sent its conclusions to Briggs along with its technical data for forwarding to Bush and Conant, and awaited the inevitable invitation from across the Atlantic to collaborate with the United States on the bomb. For a month he heard nothing. Learning that a MAUD member, the Australian physicist Mark Oliphant, was leaving for meeting in the U.S., the mystified Thomson asked him to make "discreet enquiries" about the American reaction to the documents. Immediately upon landing in in Washington, Oliphant called on Briggs, only to learn in dismay that "this inarticulate and unimpressive man had put the reports in his safe" without even showing them to his own committee. Oliphant also met with Bush and Conant, who told him they had heard nothing about the British findings.

Dismayed, Oliphant decided to make his case to the one man he thought would comprehend the MAUD Committee's findings, and who had the standing to make sure they registered with the American establishment. He wired his friend Ernest Lawrence, pleading for an urgent meeting. "I'll even fly from Washington to meet at a convenient time in Berkeley," he wrote. Lawrence happily tendered the invitation.

A few days later, Lawrence drove Oliphant up to a hill above Berkeley for a look at the beginnings of his biggest cyclotron ever, a $1-million behemoth whose towering magnet stood in a field, open to the elements like a monolith at Stonehenge, waiting for its housing to be erected around it. Back on campus, Lawrence asked his friend and colleague, J. Robert Oppenheimer to join them. Oliphant outlined the MAUD report for both men, relieved at last to be addressing an audience receptive to the potentialities of a fission-induced explosion and the need for urgency. A few days later he wrote Lawrence to express his confidence that "in your hands the uranium question will receive proper and complete consideration, and I do hope that you are able to do something in the matter." His confidence was not misplaced. Lawrence already had set up a meeting with Conant in Chicago, where they were both scheduled to receive honorary doctorates from the University of Chicago. The stage was set for one of the most important encounters of the prewar period.

On the cool evening of September 25, 1941, Lawrence and Conant met at the home of Chicago physics professor Arthur Holly Compton, another Nobel laureate. Their conversation took scarcely more than an hour. But when it was over, America's wartime planning, and the lives of all three men, had been set on a new course. The country was on its way to building the atomic bomb.

Lawrence began by repeating what he had learned from Oliphant and went on to describe unexpectedly significant discoveries made at his Berkeley lab, including the isolation of element 94, soon to be dubbed "plutonium," which could be made from a chain reaction in uranium-238 and then chemically separated to form the core of a fission bomb. The lab had also made important strides in the physical separation of U-235, the fission-prone but rare isotope of uranium, from U-238. He communicated the conviction of the refugee physicists in the U.K. that the Nazis might be developing their own atomic bomb to decide the war. "If they succeed first," he warned, "they would have in their hands the control of the world." (In fact, the Nazi scientists got the physics of the bomb wrong, and never pursued a serious program -- but the Allies did not learn that until after the war.)

Lawrence spoke forcefully, even passionately. Conant had come to Chicago still sharing Bush's skepticism about an atomic weapon. By the time the meeting was over, he had changed his mind.

But one thing still bothered him. No American physicists had seemed confident enough of the prospects for a bomb to have set aside their academic work and committed themselves to the work; that included Lawrence, who had been preoccupied with his big new cyclotron on the Berkeley hillside. Now Conant demanded that commitment.

"You put before me plans for making a definite, highly effective weapon," he told Lawrence. "But I'm here to tell you, nothing significant will happen on a job like this unless we get into it with everything we've got."

He looked Lawrence in the eye. "Ernest," he said, "you say you are convinced of the importance of these fission bombs. Are you ready to devote the next several years of your life to getting them made?"

Compton saw Lawrence freeze, his mouth half-open in surprise. His hesitation lasted only a moment. Then he replied: "Jim, if you tell me this is my job, I'll do it."

It was the moment of truth, both for Lawrence and the bomb project. "Lawrence was particularly vociferous about the need for mobilizing all scientific talent for the uranium program," Conant wrote later. "I could not resist the temptation to cut behind his rhetoric."

On October 9, two weeks after the meeting in Chicago, Bush met FDR at the White House. He delivered the MAUD conclusions with such conviction that Roosevelt agreed to launch without delay a comprehensive research program aimed at building the bomb. The quest for the bomb was underway. It would not cease until early August 1945, with the destruction of two cities in Japan.

Lawrence would make good on his pledge to Conant; over the next four years he would play a central role in the Manhattan Project – developing the process for electromagnetic separation of U-235 and supervising the construction of the Oak Ridge, Tenn., plant that would provide virtually every atom of the uranium that went into the bomb detonated over Hiroshima; overseeing his junior associate Glenn Seaborg's isolation of plutonium, the core of the Nagasaki bomb; and remaining one of the leading scientific advisors to the program's head, Gen. Leslie Groves, through the war. In the months and years following the Japanese surrender – indeed, to the present day – the moral dimensions of the decision to develop and use the bombs would be passionately debated. Lawrence shunned the second-guessing. To him, as to many of his contemporaries, the program to build the Bomb, which he had saved from extinction, was crucial for winning a war against uncompromising enemies, and he never looked back.

© 2015 Michael Hiltzik, Author of Big Science: Ernest Lawrence and the Invention that Launched the Military-Industrial Complex