A Brief History of Presidential Inaugurations

Rick Shenkman is the publisher and editor-in-chief of the History News Network and the author of numerous books on American history, including "Presidential Ambition: Gaining Power At Any Cost" (2000). 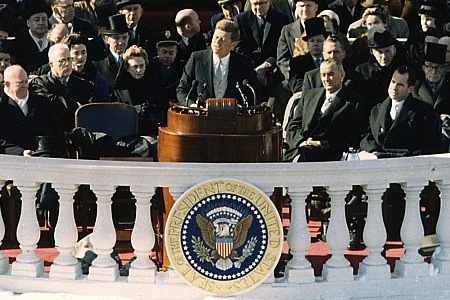 Presidential Inaugurations -- which are held every four years on January 20th, except when the date falls on a Sunday, in which case they are held that Monday--serve many purposes, but the main one is symbolic. Following the usually heated conflict attending elections, inaugurations serve to unite the country around the president, lifting him up above the regular hurly burly of politics, giving presidents a chance to strike a pose of statesmanship. The symbolism of a country uniting around its chosen leader is powerful. It is a testament to the peoples' commitment to self-government. In other countries the transition in power between leaders of opposing parties is often marked by bloodshed. But not here in the United States.

By tradition presidents deliver an inaugural address in which they lay out their vision for the country. Some of these addresses have been so memorable that we remember select lines generations later.

In recent decades inaugurations have become so extravagant that they have had to be sponsored by contributions from the wealthy and corporations. This has elicited criticism from liberals, who bemoan the influence of money in politics. It is hard, they argue, for a president to make decisions in the best interest of the country as a whole when his inaugurations are paid for by the wealthy. Periodically liberals have objected to the role of the military in inaugural day parades.

Conservatives generally approve of inaugurations as a magnificent tradition. But for a time after the election of Democrat Franklin Roosevelt some small-government conservatives criticized the extravagance of modern inaugurations, which seemed to them to celebrate big government.

The first president to hold an inauguration was the first president: George Washington. Every president thereafter followed his example, marking the swearing in with an address and a celebration (though in some years, especially during war-time, celebrating was kept to a minimum). He was sworn in on March 4, 1789. The date of the ceremony was later changed to January 20 during the administration of FDR to reduce the length of time between the election and the start of the term of the new president.

With just a few exceptions, the outgoing president has attended the ceremony of his successor--but not always in good cheer. Harry Truman and Dwight Eisenhower barely spoke on their way up from the White House to Ike's inaugural.

The song "Hail to the Chief" was first played at an inauguration in 1845 for James K. Polk. The music comes from an old English tune by songwriter James Sanderson.

Here are some highlights from past inaugurals:

George Washington: At the suggestion of James Madison, who drafted the inaugural address, Washington included a plug for the as yet unratified Bill of Rights. It helped win passage of the amendments. Washington was apprehensive about his inauguration as president. He confided to a friend that he felt like a thief going to an execution.

John Adams: His inaugural address included one sentence that had over 700 words!

Thomas Jefferson: His most famous claim that "we are all republicans. We are all federalists" was actually less of an appeal to nonpartisanship than an acknowledgement of the support he had received from some federalists. When assumed office he threw out federalists who hadn't supported him and installed members of his own party--a practice that became common until the establishment of civil service reforms late in the 19th century.

James Monroe: His first inauguration in 1817 was the first to take place outdoors. It was by necessity. The British had burned the capitol in the War of 1812.

Martin Van Buren: He took office just as the country slipped into a depression. (So did Grover Cleveland in 1893.)

William Henry Harrison: He served the shortest term (1 month, then died) and delivered the longest inaugural address (1 hour and 40 minutes). His inaugural featured the first formal parade. Harrison was the first president to travel about the country to meet people on the campaign trail, much to the horror of traditionalists, who thought it was too great a concession to democratic norms.

Franklin Pierce: He memorized his address. (So did Grover Cleveland.) But his was the saddest of all inaugurations. His young son had been killed in a train accident just two months earlier. His wife refused to move into the White House when she learned that he had lied to her. He had sworn that he hadn't lifted a finger to win the nomination. He had.

James Buchanan: Candles dripped on Buchanan's guests at his inaugural ball. His was the first inauguration to be photographed.

Abe Lincoln: His son lost the president's first inaugural address on the train heading from Springfield to the capital. Lincoln found it in the luggage compartment. First time blacks were allowed in an inaugural parade was in 1865.

James Garfield: He got a bad case of writer's block and kept putting off the drafting of his address. He didn't finish it until 2 in the morning on the day of the event.

Warren Harding: He was the first to use a device to amplify his voice.

Calvin Coolidge: Coolidge, who ascended to the presidency when Harding died in office, was sworn in by his father in an emergency ceremony held at his family farm in Vermont. His inaugural address in 1925 was the first broadcast by radio.

Herbert Hoover: His was the first recorded on film in 1929.

Franklin Roosevelt: FDR had 300 members of the Electoral College in his 1933 parade--a kind of civics lesson. His 1933 parade was the first to feature a movie star--Tom Mix. He was the president who began the tradition of attending church the day of the inaugural. In 1945 he added the invocation to the ceremony.

Harry Truman: His was the first broadcast on television in 1949. It was said that up to a million turned out to watch his swearing in, one of the biggest crowds in presidential history, enticed by Democrats who were shocked by Truman's victory. (1.8 million turned out for President Obama in 2009.)

Dwight Eisenhower: His first inaugural parade lasted an astounding 5 hours! (Most last no more than 3 hours.) A cowboy lassoed Ike.

John Kennedy: The temperature was 22 degrees, but JFK refused to wear an overcoat. (He did wear long underwear.) He remained for the entire 3 hour plus parade (Jackie left early). He had learned there were no blacks in the Marine Corps units in the parade and ordered that they be included.

Ronald Reagan: Reagan's first inaugural was the warmest on record--55 degrees. His second was the coldest on record--20 below with wind chill factor), so cold the ceremony had to be moved indoors. He broke the tradition of being inaugurated on the east side of the capital. A westerner, he wanted to face west--toward the Washington monument.

Bill Clinton: Clinton didn't finish his address until 4:30 in the morning. Hillary joked he "never met a sentence he couldn't fool with."