How Will Our Response to the Paris Attacks Look Like from the Perspective of History?

The author, a retired diplomat, served at the U.S. Embassy in Ottawa from 2004-2007 and writes on history and current events in historyallaround.org. 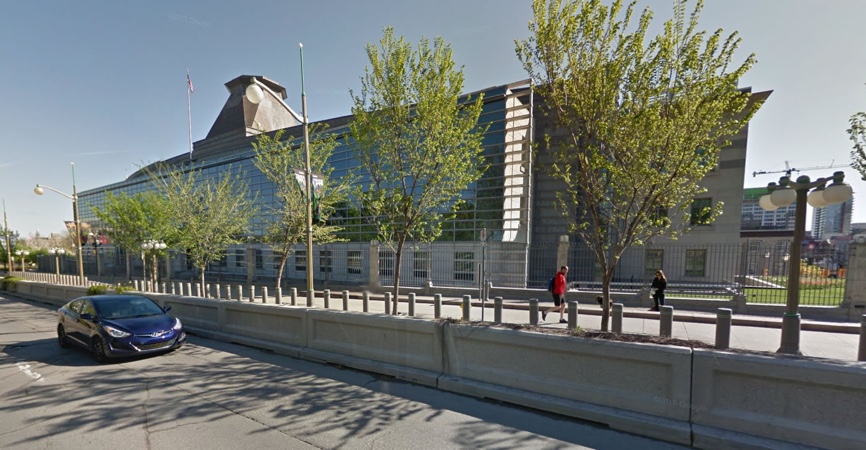 The controversial barrier outside the US Embassy in Ottawa

“One day those barriers will come down.” I was referring to the big concrete, jersey barriers surrounding the U.S. Embassy in Ottawa. Since they took up a lane of traffic in the downtown area, they were the target of criticism by the city’s residents whose commutes were delayed. This security precaution was needed, though, as the Embassy building stood wedged in between two busy streets.

As the Ambassador’s deputy I had added this phrase to his remarks for the ceremony we were planning for the fourth anniversary of the September 11 attacks. History was my guide, specifically the memory of Ronald Reagan at the Brandeburg Gate in 1987, demanding that Mikhail Gorbachev tear down the wall separating East from West Berlin. Reagan’s remarks seemed preposterous at the time, a soundbite that would have no effect on the Soviets, even if Gorbachev had been pursuing seeking an opening with the West at the time.

A young speechwriter named Peter Robinson had inserted the “tear down the wall” words into Reagan’s speech, admitting decades later in Prologue, the National Archives magazine, that he practically stole them from a German woman at a dinner party. She had told the gathering, "If this man Gorbachev is serious with his talk of glasnost and perestroika, he can prove it. He can get rid of this wall."

Robinson included those words in his drafts, and, he encountered resistance in the clearance process throughout the bureaucracy, all the way up to the most senior levels. The State Department and the National Security Council objected, preparing as many as seven of their own drafts. Robinson recounted that the objections clustered around that phrase: “It was naïve. It would raise false hopes. It was clumsy. It was needlessly provocative.” These words had the potential to derail progress; now Gorbachev could never tear down the wall, or he would seem to be acquiescing to Reagan’s demand. But, it was the one line in the speech that Reagan himself liked, and it stayed in.

That line did become the sound-bite for the speech, an in-your-eye poke at the Soviet Union. Initially, it was nothing more than that, a throw-away line designed for one evening’s news. Its perception as naïve vanished when three and a half years later, the wall did fall, torn down not by Gorbachev, but by citizens on both sides of the barrier.

Most of all, Reagan’s phrase articulated the unthinkable. We had lived with the Berlin Wall for decades; the Cold War and nuclear threats for longer. That was our present, and we lacked the vision to imagine a different future. Call it naïve or grandstanding, a one-night line, but Reagan had painted a future that did not have to be a continuation of the present.

Back in Ottawa, the phrase in the Ambassador’s speech seemed naive as well. Inside the Embassy we debated whether to use the image, with our security officers adamant that it would only remind residents about the barriers and their delayed commutes, opening up again the clamor for their removal. We ended up using it, but fourteen years after 9/11, the jersey barriers still surround the U.S. Embassy in Ottawa.

The attacks in Paris mean that the prospects of removing those concrete barriers are further away than at any time since they were installed. Those attacks mean there is no alternative right now other than to ramp up security and work with our partners in defeating the threat that ISIS poses.

Yet, my memories of Ottawa and the lessons of the Berlin Wall speak to our present situation, instructive in helping us imagine a different future. Those barriers will not always be there. ISIS will one day take its place in history books alongside the Barbary pirates. Does anyone really doubt that?

But as we imagine how historians will write about this era in 50 or 100 years, do we want that narrative to include a gut reaction to refuse entry to refugees from Syria and elsewhere, a reaction that has reminded many of our failure to accept Jewish refugees in World War II? The Syrians are fleeing because of ISIS, because of unending war. Historians might compare our willingness to trample on privacy and free speech rights with the Alien and Sedition Acts in 1798 or the Sedition Act of 1918 or Joe McCarthy in the Cold War.

We need to have confidence in our ideals. Call me naïve.