These Two Politicians Lost Their Bids for the White House. But They Still Changed History. 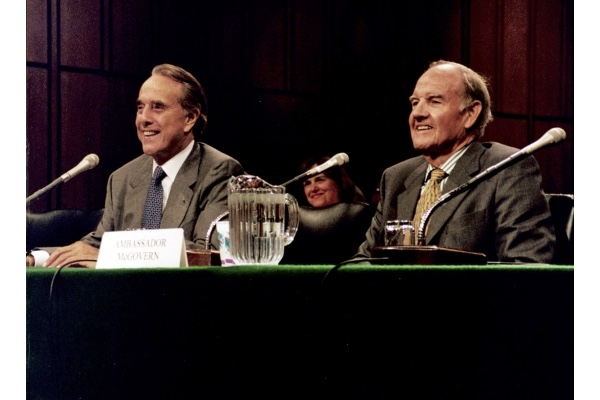 As this presidential election season begins, let's take a moment to look back at past campaigns. The history books will show how former senators George McGovern (1972) and Bob Dole (1996) each won their party nominations for President.

Both men ultimately lost their bid for the White House in the general election. Dole is retired now and McGovern passed away in 2012. But their story is far from over.

Both McGovern and Dole are making a difference today, where it’s needed the most. Their legacy is felt across the world.

Far away in Ethiopia there is the threat of famine because of a severe drought caused by the El Nino weather occurrence. Farmers have been unable to grow food because of the lack of rainfall.

But as we speak, children in Ethiopia are getting a life-saver. These are school meals because of an initiative started by McGovern and Dole.

The McGovern-Dole Food for Education program, run by the U.S. Department of Agriculture, has made sizable donations to Ethiopia the last several years. The UN World Food Programme (WFP) is distributing this food. 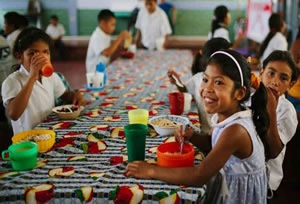 A McGovern-Dole Food for Education grant was used by the charity Food for Poor to improve the lives of 72,000 school-age children, including providing hot meals in 774 schools in some of the most rural regions of Nicaragua. (photo courtesy of Food for the Poor)

The McGovern-Dole school meals have been crucial as the drought crisis has developed.  Stephanie Savariaud of WFP says "262,000 children in Afar and Somali regions have food at school" from McGovern-Dole. These are two regions hardest hit by the drought and food shortages.

Imagine you are a family in this drought zone, with food supplies low. You have to make tough decisions including sending your child to work instead of school. It might be the only way to get food on the table.

But then you hear that food is available at school because of this amazing program from the United States. Now you will send your child to class.

George McGovern was very influenced by his experiences serving in World War II. He witnessed first-hand the hunger in Europe caused by the chaos of war.  Likewise, Bob Dole served in the U.S. army and saw the horrible effects of conflict.

These experiences influenced the two men to make fighting hunger a part of their life.

Both McGovern and Dole fought hunger at home and abroad during their careers in the Senate. They helped to improve the National school lunch and breakfast programs for American children.  McGovern also served as the Food for Peace director, which is the main American program for fighting hunger globally.

They set a great example to every member of Congress. They did so in a bipartisan way. McGovern was a Democrat and Dole a Republican.

And their impact is not only being felt in Ethiopia today but also in Guatemala, where drought has also caused food shortages.

Save the Children is using a McGovern-Dole grant to feed 21,654 children in 118 schools in drought affected areas. Mauro Tartaglia of Save the Children says "The drought is badly affecting Guatemala and other countries in Central and South America."

McGovern-Dole again are coming through in the neediest of times. The USDA says that since 2002 McGovern Dole "has benefited more than 30 million children in 38 countries" with school meals.

But let's not be satisfied with that. That number should be a starting point. We should be even more proactive in ways McGovern-Dole could help during this global crisis of war and drought.

There are Syrian refugee children in Lebanon that are really struggling with hunger and poverty. In fact,  families will withdraw their children from school so they can work for money and food.

That is why Mercy Corps has been setting up school meal programs in Lebanon. If you can provide food at school parents will send their children. Depending on the day and location children receive either chicken, fish, meat, beans or sandwiches and fruit.

Linda Teto, a kindergarten teacher at Rawdat-al Toufoula School says “Some of them feel this is their main meal for the day. Their parents aren’t able to give them this much food. They came from poor families. They hardly have any money. They can’t provide this much food.”

The school meals from Mercy Corps are provided from local sources which helps even more families in Lebanon. So this is a good program that could use a big expansion. Why not have McGovern-Dole support the Mercy Corps plan for Syrian refugee children with school meals?

That is something the Congress should take up right away as part of its overall strategy for securing stability in the Middle East.

This January also marked the five year anniversary of the earthquake in Haiti. Not only is the country still recovering from the disaster, but drought has taken its toll. The World Food Programme has been helping Haiti build a national school lunch program on this road to recovery. To continue this progress they need McGovern-Dole support.

Lorène Didier of the World Food Programme in Haiti says "WFP has submitted a proposal to receive a five years McGovern Dole grant for which approval is pending." Funding from a previous McGovern-Dole grant had run out in Haiti. So they need a new one.

McGovern-Dole funding is limited by how much Congress allocates. So it's not always assured a program will receive funding. The more funding Congress can provide the more meals for children worldwide.

We know from McGovern-Dole how important school meals are in times of distress. So let's take action.

As this campaign season gets underway you are going to hear a lot of talk. That is what elections are about in a sometimes unfortunate way. But remember, it's men of action that are remembered. McGovern and Dole are those men whose legacy endures.

And that is why children in the famine threatened areas of Ethiopia are having precious meals that will save their life and keep them in school and learning. That is why millions of other children receive school meals. And millions more should receive them if we have the vision and the will like McGovern and Dole.