"A Bronx Tale: The Musical": The Movie About the Mob Is Now a Play 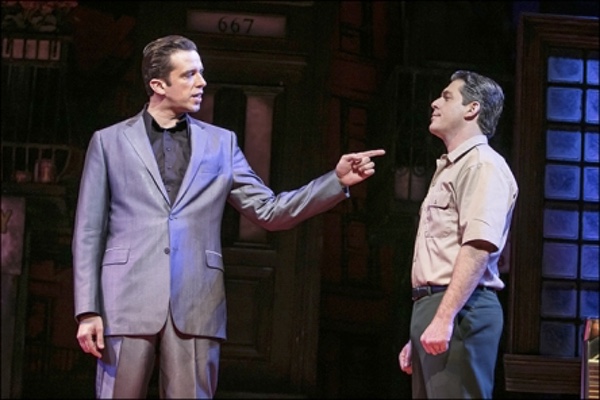 A Bronx Tale: The Musical was one of those movies that did not do that well when it played in theaters (1993), but became a huge success on television over the years. The story, by Chazz Palminteri, is about a little kid who grows up in a Bronx neighborhood in New York run by the mob and joins the gang, under the alluring spell of its leader, father figure Sonny. The kid’s hard-working real dad, a bus driver, and loving mom tried to dissuade him, unsuccessfully, and he grew up to be a member of the mob crew, hurtling towards his possible death amid the mob wars and civil rights conflicts of the late 1960s.

Palminteri wrote the story as a one man play and starred in it in Los Angeles in the late 1980s. It then became a film starring Palminteri and Robert DeNiro, who also directed it. The movie, almost always listed among the top twenty mafia movies, has been seen by millions on television and has become a cult classic because of its solid family story within the overall mob plot.

Now, after much revision, it has been turned into a stage musical. It opened last night at the Paper Mill Playhouse, in Millburn, N.J., and is just as good as the movie, maybe even better. It has mob battles, racial tension, gunfire, fist fights and, amid all of that, a tender and heart-warming love story between a man and his son.

The impressive musical, again directed by DeNiro, along with Jerry Zaks, uses the central events of the movie as its plot, but discards a lot of film scenes and concentrates on the relationship between the kid, Calogero, mobster Sonny and the boy’s dad, Lorenzo.

The musical has all of the wonderful vignettes and characters from the movie (humorously introduced as their mug shots are taken) such as Eddie Mush, a gangster who has never won a bet in his life (he was so bad, it is said in the play, that when ticket sellers at the track gave him his tickets, they were already ripped up). There is the Belmont Avenue bar, mobster Sonny’s office, the rivalry with the African Americans one block away, crap games and the women of the neighborhood, old and young, and the nutty “tests” the mobsters invent to determine if a girl is marriable.

The first major incident of the show is the murder of a man in the street committed by Sonny. The kid, about ten, refuses to finger Sonny for the killing, and that starts their lifelong friendship. The boy’s father is appalled that they are friends and tries, unsuccessfully, to break it up. Gradually, the kid becomes a fixture at Sonny’s bar and is even allowed to roll dice for Sonny in the big crap game. Calogero’s name is changed to “C” and he grows up in the mob.

The story gets intense when ‘C’ becomes a young man and the mob is involved in warfare and the relatives of old enemies start to reappear. The mob is challenged for their turf by young African-Americans from nearby neighborhood and interracial dating starts to flourish, ominously. ‘C’ falls for a pretty young black girl in 1968, at the height of the Civil Rights movement, and it sets off a torrent of trouble for everybody.

Throughout the second act, there is enormous pressure on ‘C’ from his lovable Dad, and mom. He is also under pressure from Sony and the gangsters and his girlfriend. The finale is a complicated “tale” in itself.

The music in the play, by Hollywood veteran songwriters Alan Menken and Glenn Slater, helps to tell the story. There are a few unneeded songs, but for the most part the musical is very good. The success of the play, though, is its Bronx setting and ‘60s atmosphere. This is the old neighborhood, all right, but the old neighborhood undergoing substantial change and a neighborhood invaded by the Mafia. What’s a little kid to do?

DeNiro and Zaks have done a splendid job of keeping all of the romance and nostalgia of the movie in the musical. They also do fine work in making much of the action appear as moving scenes from the movie itself and keeping the action at a high level. They get splendid performances. Jason Gotay is memorable as the older Calogero and so is Richard H. Blake as Lorenzo, Lucia Giannetta as mom Rosina, Coco Jones as the African-American girl that C falls in love with. Nick Cordero is tremendous as Sonny. He not only plays the neighborhood mobster well, but bears a striking resemblance to Palminteri, the co-star of the movie.

The star of the musical, though, is remarkable Joshua Colley as the young kid Calogero. He is full of personality and is a good singer and dancer. He steals the show in his number, I Like It. This scrappy little actor, full of spunk, is going places.

You learn much history in A Bronx Tale: The Musical, and that is the delight of seeing it. Somehow, some way, everything you wanted to know about the functioning of a small mob crew, sort of a Sopranos in the streets and not the suburbs, is in the musical, as well as a nice chronicle of the urban troubles of the Civil Rights movements and the changing nature of New York City in the volatile 1960s.

Do we really need another mob story, though? There are hundreds of them in films, stage and television. Do we need one more?

Oh, yes. In America, we always need mob stories, westerns, spy thrillers and every episode we can find of I Love Lucy.

Hooray for the singing and dancing gangsters of Belmont Avenue in the Bronx and the spunky little kid who invades their run down beer stained bar and the downstairs crap game.