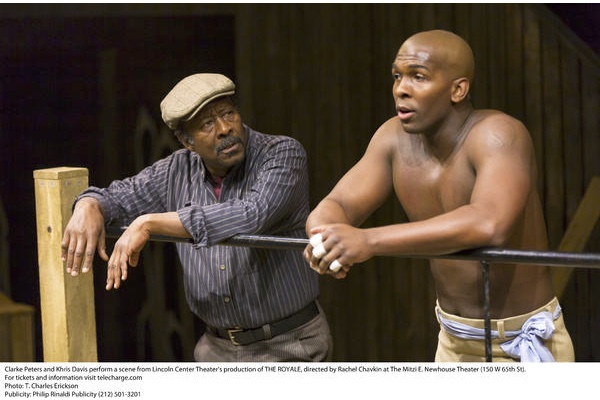 Jack Johnson, the defiant black heavyweight boxing champ of the early years of the 20th century, was a terrific pugilist and, at the same time, a lightning rod for racism and controversy in America. His fights made an enormous amount of money, drew huge crowds, garnered front page press attention, became hit movies and made the impeccably dressed, audacious Johnson a national figure.

At the same time, though, his fights provoked riots, his womanizing landed him in jail and his sale of the Cotton Club in Harlem to gangster Owney Madden drew the wrath of the black community. He was an oversized, glittering, almost mythical sports figure in American history, the Muhammad Ali of his day.

A new play about Johnson, in which he is called Jay Jackson, The Royale, opened last night at the Mitzi Newhouse Theater, at Lincoln Center, in New York. It is a TKO (technical knockout) win for gifted playwright Marco Ramirez, a writer who, like so many others, sees the American dream in our rough, tough boxing heroes. Here, in a sparkling and deftly written play, Ramirez presents Jay ‘the sport’ Jackson (Johnson). When the story starts, Jackson is mulling over his chances to get a title shot with the white heavyweight champ deep in the heart of racist America.

The Royale is an absorbing story, a mixture of history and sports and a scary look at a highly racist America in the middle of the Jim Crow era. It is full of hysteria and history and a study of a titanic black fighter in a world of sports dominated by white men.

It takes place in 1905 just before Jackson steps into the ring to challenge the champ. This is a true story, but what was left out was the marvelous tale of how the real Jack Johnson followed the real champ, Tommy Burns, around the U.S. for two years, always challenging him and taunting him wherever the champ turned up. They finally met in a ring in Sydney, Australia.

In the dressing room prior to the championship fight, Jackson defends his determination to take the crown despite the threatened trouble that always surrounded Jackson’s fights (the real Johnson’s record was 73 wins, t3 losses, 10 draws and 5 no contests).

There is no actual boxing in the drama, nicely directed by Rachel Chavkin, just a sort of shadow boxing with special effects. It works, though, and you can feel the heavy blows tossed by different battlers in the story as lights flicker and noises bellow throughout the theater. Right in the first five minutes, you are presented with the larger than life personality of the bold Jackson, so confident of his skills, battering a young contender and trying to whip the crowd into frenzy at the same time.

Jackson gets his shot for the title and trains hard. The trouble, his fiery sister Nina tells him, is that his victory will trigger race riots and endless trouble for not just him, but the black community as well. She tells him to throw the fight. He has to put his own personal ambition to the test against her wishes, and re-define his vision of how a black boxing champ could help black America, that worships him already.

The well- directed and highly interesting play has its faults. It starts off quickly, but then slows down. It picks up again with the arrival of Jackson’s always outraged and lovely sister, whose attacks on her brother breathes new life into the story.

The real problem though, is that this play about Jack Johnson tells you little about Jack Johnson. He was a charismatic figure in his day, loved by African Americans and loathed by whites, especially after he married three white women. The phrase ‘the great white hope’ came about because of the public’s deep desire to see a white man beat Johnson, who held the title for seven years and destroyed anybody, black or white, who got into the ring with him. He lost his title to Jess Willard in Havana in 1915 in a fight that Johnson’s supporters always claimed was fixed.

Johnson was a well-dressed, egotistical man who chased women of any color from coast to coast and sometimes bedded down with several women in a single day. His sexual stamina came from “eating eels and thinking distant thoughts” he told a reporter. His womanizing, and his bragging about his conquests, angered many. In 1912, on trumped up charges, he was convicted of violating the newly passed Mann Act, which made it a crime for a man to transport a woman across state lines for sexual purposes. He was sentenced to a year in prison.

Johnson had no intention of going to jail and fled the country, living abroad for seven years. He eventually returned and served a year at Leavenworth prison.

None of this was in the play and it would have enriched the story and the character of Jay Jackson. There are many racial stories in the play and Nina certainly drives that home with her lecture to her brother, but the real story of Johnson was a racial hurricane and should have been included.

The star of the play is the huge, muscular Khris Davis, who is so big and tough that he might become a championship boxer himself. He does a fine job of portraying Jackson as a single minded boxer and a crowd pleasing celebrity. Director Chavkin gets other fine performances from (especially) Montego Glover as sister Nina, John Lavelle as manager Max, Clarke Peters as Wynton and McKinley Belcher III as Fish. The striking boxing gym/ring set is by Nick Vaughan.