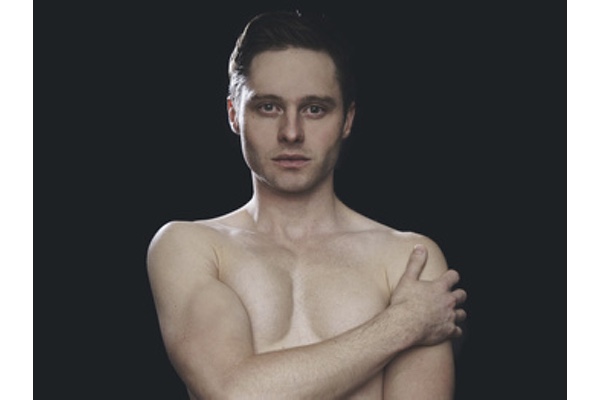 We all know the formula for romance. Boy meets girl. Boy loses girl. Boys gets girl back..

In Anna Ziegler’s stirring new play, Boy, it is boy who is girl who is also a boy meets girl. Boy loses one girl (him) and then loses another girl (her) and is still a girl, or is he a boy? Is she a boy? Or he a girl?

Confused? Read on. The story is based on John Colapinto’s book As Nature Made Him: the Boy Who Was Raised as a Girl.  In this powerful and absorbing play, Ziegler tackles the true story from the 1960s of a small child whose genitals are mutilated in a car accident and is turned into a girl by his parents and a psychologist. The child, who has a twin brother, grows to manhood dressed as a girl and acting like one – and hating it. The drama, that just opened at the Keen Theater, on Theatre Row, W. 42d St., New York, really makes you think, especially in this new trans-gender world we live in.

The boy, Adam, played majestically by the gifted and sensitive Bobby Steggert, struggles within his identity crisis all of his life (you have to follow the story closely because Adam always dresses as a boy). He is told, defiantly, by his mother that he is going to be a girl, but her belief in that wanes over the years. His father, ever so reluctantly, goes along with the desires of his wife and the psychologist. The strength of the play is how upset the kid becomes as he grows up and how the lives of his parents and brother are ruined by his plight. His dad becomes an alcoholic and his mother is a perpetual nervous wreck. It is tender. It is angry. The play calls into question not only the psychologist’s work, but the way in which the parents support psychologist’s decisions just because he is a “professional” and is supposed to know what he is doing (there are a lot of examples out there of parents and kids in different situations doing that same thing).

All the way, you are on the kid’s side and hoping that life turns out OK for him and if his troubled girlfriend will see him for the way he really is.  You wonder, though, what would have happened if this incident happened today, when many, especially psychologists, know so much about sexual identity and the emotional side of it. The story probably would have turned out differently.

You assess a lot of blame, too. When I came out of the theater, I told my companion that if I was the kid’s dad I would have beaten the daylights out of the psychologist and then run him over with an 18 wheeler truck. How could he have done that to an innocent little kid? How could the parents have let him?

The play is a bit disordered. Adam tumbles into a romantic skirmish with his girlfriend, Jenny, when he is unable to explain to her that he has women’s genitals and has been taking hormones (duh, she has not discovered this already?) He is 23. Then there is a flashback to his car accident. Then he is 23 again. There are large year markers on the wall to tell you what is going on and when, but you still get disoriented. Another problem in the story is that there are numerous flashbacks followed by quick returns to the present scene. You get a little mixed up watching it all.

The author might also have spent a minute or so of dialogue to explain how primitive sexual research work was in the early 1960s and how eager parents and kids were to keep any sexual problems very quiet – preventing others from making useful suggestions that might have helped. It is another reminder of how sexually repressed America was in the 1950s and early 1960s. That repression hurt a lot of people, just as it did in this story.

Despite that, Boy is a winner. The play is ably directed by Linsay Firman. The performers, Steggert as Adam, Rebecca Rittenhouse as jenny, Paul Niebanck a Dr. Wendell Barnes, Heidi Armbruster as mom Trudy and Ted Koch as the father, are all impressive.

Ziegler’s fine play shows everybody that our sexual world may be changing on the surface, but that is has always been changing – below the surface. You wish that little Adam could have had a Bruce Jenner to talk to back then.

Boy is man of a play.