Christie’s 1950s Mousetrap Still Slams Down Hard and with Gusto 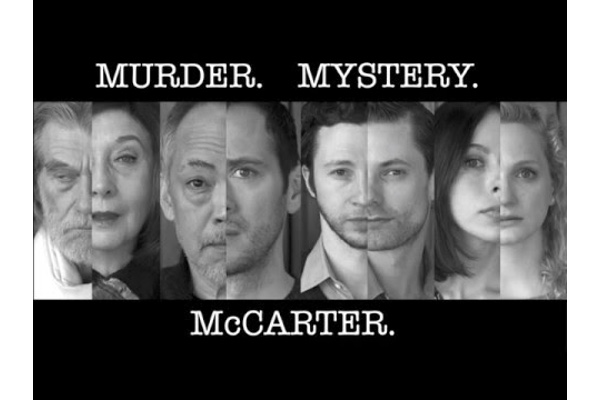 Somewhere on the earth today, some erstwhile critic is finishing a review or column or story that claims British writer Agatha Christie’s play The Mousetrap, running since 1952  in London, is old, decrepit, out of date and stodgy.

Then why has it been running for 64 years?

Yet another production of the play opened last weekend at the McCarter Theater, in Princeton, N.J. and under the innovative and nimble direction of Adam Immerwahr charms yet another audience of theatergoers.

The neatly presented story starts with a jolt. You see giant sized, dark silhouettes of people behind a thin beige screen participate in a murder, followed by the traditional scream. Old fashioned? Stodgy? Hardly.

Then the action starts, fast and furious. Well, not fast and furious. This is British, you know. It starts moving nicely, with a cup of tea, as the radio reports that a Maureen Lyon has been murdered in a British village nearby. The police are looking for a man with a dark coat, light colored scarf and dark felt hat. Mollie Ralston, a pert blonde who with her husband Giles is running Monkswell Manor guest house, is scared. There is a snowstorm raging outside the house (staged nicely by director Immerwahr) and out of it tumbles her four guests for the weekend. On hand are Christopher Wren, a bundle of nerves who twitches his way this way and that on the stage, frazzled old  Mrs. Boyle, who finds fault with just about everything in the guest house and Major Metcalf, an easy going army fellow. There is also Miss Casewell, a woman who dresses like a man. Then a fifth guest comes in out of the snow, a mysterious Mr. Paravicini, whose car has overturned in the storm, he says. Is the killer really one of those men? A man looking like a woman? Or a man not yet arrived?

A bit later, Detective Trotter, from the beleaguered village police force, arrives through the blizzard on skis to let all know that this case goes back to the death of one of three children raised by the Lyons, who did time in prison for the death of one child.

Act one ends with a horrific incident and the traditional scream from the scared to death female (pick any). In act two, the brilliant Detective Trotter finds the killer.

The play, set in the late 1940s, when it was written as a radio show, is a nice look at a village and post--war England, plus all of the scrumptious period costumes. Most of Christie’s stories, and the stories of many writers in that era, were set in small towns, unlike American crime stories of that same time, that took place mostly in cities. In The Mousetrap, you learn much about manor house living, household appliances of the era, the paucity of snow removal services in Britain and law enforcement (you can have a spot of tea, too).

What carries this Mousetrap is the deft direction of Immerwahr. As the night wears on you discover that these guests are not really the people they try to make you think they are. Mrs. Boyle, as an example, was the judge involved in the case of the three children. As the outer skin of each is peeled away, the plot thickens.

In her script, Christie kept the tension high, letting the action drift slowly towards its conclusion. Her characters are deep and strong and here at the McCarter, a cast of truly skilled actors play them. Starring are Jessica Redford as Mollie, Adam Green as her husband, Giles, Andy Phelan the jumpy Cristopher Wren, Sandra Shipley as Mrs. Boyle, Graeme Malcolm as Major Metcalf, Emily Young as the irritating Emily Casewell, Thom Sesma as Mr. Paravicini and Richard Gallagher as the intrepid Detective Trotter.

The Mousetrap was the foundation for hundreds of manor house plays and short stories and novels written in the UK in the 1950s and 60s. It is a solid play with a rigid plot structure, superb characters and, from time to time, electric tension. Yes, it is an old drawing room play, but it draws you into the wonderful world of Agatha Christie, her delightful suspects and killers and, of course, a lot of loud screams by women with their hands holding the sides of their faces.

And, needless to say, it is a good story. Christie wrote dozens of stories with complex and engaging plots loaded with finely etched characters. They are as powerful today as they were sixty years ago. An example is her novel Ten Little Indians. It plays so well today that the BBC recently turned it into a three part series, Then There Were None, and aired it over the holidays to great fanfare. The Mousetrap is just as good, if not better.

Icing on the Christie cake: The theater has a delightful two page quiz on the author and her works in its program.

See The Mousetrap and catch a bit of history. No small piece of cheese needed, either.