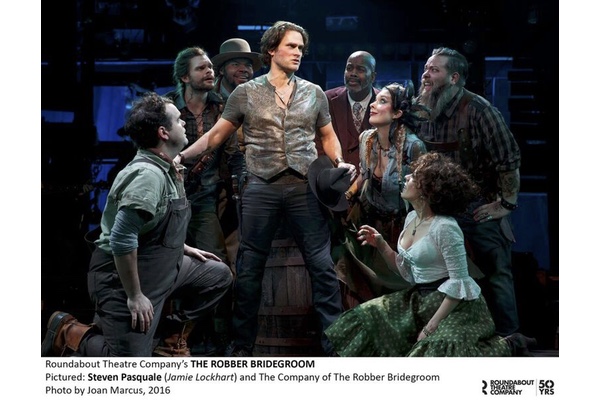 The Robber Bridegroom is electric. It is a Mississippi hoedown of the first order, with a bluegrass band, spirited fiddling, stomping feet, boundless dancing and a wild as the blue yonder plot about a devil may care rogue lover trying to conceal his identity from everybody and getting into endless trouble in the process.

The musical, which just opened at the Laura Pels Theatre in the Harold and Miriam Steinberg Center for Theater, W. 46th Street, in New York,, captures the lively characters of the Mississippi country in the early 1800s and chronicles the efforts of a bandit, Jamie Lockhart, to romance and marry a planter’s daughter and hijack his plantation at the same time. It is a trick, but the robber bridegroom nearly pulls it off. The story is an endless bluegrass party. It is a slick and convincing show, even though it is a bit corny and the hidden robber plot trick is beaten to death for ninety minutes.

The play (by Robert Uhry) has some wonderful music (by Uhry and Robert Waldman) and the dancing is superb. Director Alex Timbers has created a mirthful show, even if it is a one-joke story, and gets marvelous performances from Lance Roberts as a planter, Greg Hildreth as Goat, Andrew Durand as Little Harp, Evan Harrington as Big Harp, Nadia Quinn as Raven and Devere Rogers as Airie. Particularly effective are Steven Pasquale as the romantic and thoroughly lovable Jamie, the robber bridegroom, Ahna O’Reilly as the flirtatious Rosamund and Leslie Kritzer as the frisky Salome, who is just about ready to dive into any bed in the Mississippi territory.

Timbers and set designer Denyale Werle do a fine job of creating scenes within a simple, one-room set where all of the action takes place. Characters move about the stage holding bushes and weeds and change the scene into a forest. Large sheets are used for water. People seem to emerge from the sides of trees. A woman’s body vanishes within a large sack.

For the most part, it is a fun show. There is an engaging turn of events in the early moments of the show when a father lectures his daughter on the evils of the bandit of the woods, but she falls in love with him as soon as she meets him. So much for fatherly advice.

On the negative side, there is very little history in the historical show and it cries out for it. We are told that the fictional story takes place on the fabled Natchez Trace near the Mississippi River, but it stops there. There is a song or two about the highway, but nothing more. It was important, both to Mississippi and the country, yet little is done with it. You would not stage a show about the Pacific Ocean and not talk about the ocean, would you?

The Natchez Trace began as a well-worn path taken by animals migrating throughout the area hundreds of years ago. Then it became an Indian trail that tribes used to move between what later became Mississippi, Louisiana and Tennessee. It connected the Mississippi, Tennessee and Cumberland rivers. Some of the excavated locales along the trail are 2,000 years old. In 1801, Thomas Jefferson ordered the construction of a highway along the trail to serve for both transportation and U.S. Postal service. Agreements were signed with area tribes to facilitate the development of the highway. In 1809, the trail was opened and inns and trading posts were soon built along it. The highway was used by General Andrew Jackson’s army in the War of 1812 and the Creek War later to move troops and cannon. In the 1820s new routes were established that enabled faster travel from growing cities, such as Memphis, and the Mississippi and on to New Orleans. Later, steamboats cut the traffic on the Trace even further.

During these years, a wide assortment of people lived on the Trace and traveled down or up it, including many preachers in the first Great Awakening movement, traders and settlers on their way west, gamblers, show people and hucksters. Its colorful life became e backdrop for many stories, novels and plays. One group of inhabitants of the Trace was gangs of robbers who preyed on people. These men were the source of writer Eudora Welty’s  Robber Bridegroom short story, upon which the musical is based.

What about the condition of Mississippi as a territory when the play takes place? It was mentioned, and then dropped right away.

Little of this is mentioned in the play. The land, and its people, were extraordinarily interesting, fascinating really, and should have been included in the play somehow. They would have made the musical richer.

Director Timbers, one of Broadway’s best, has created a show pretty heavy on twang and silliness, but it works pretty well. There are some marvelous bits, such as a barrel with a man’s head inside of it and a gorgeous farmer’s daughter who, with a little make up, becomes a Daffy Duck of a farmer’s daughter.

The Robber Bridegroom is a pretty good play, worth seeing, and a lot of fun, but it needs some more solid history and a sturdier plot and production.

PRODUCTION: The play is produced by the Roundabout Theater Company in association with Daryl Roth. The book and lyrics are by Alfred Uhry and the music is by Robert Waldman. Sets: Denyale Werle,  Costumes: Emily Rebholz, Lighting: Jacob Degroot and Jeff Croiter, Sound: Darren I. West and Charles Coes. Choreography is by Connor Gallagher. The play is directed by Alex Timbers. It has an open ended run.