The Tragic, Compromised Women of the Liberian Civil War 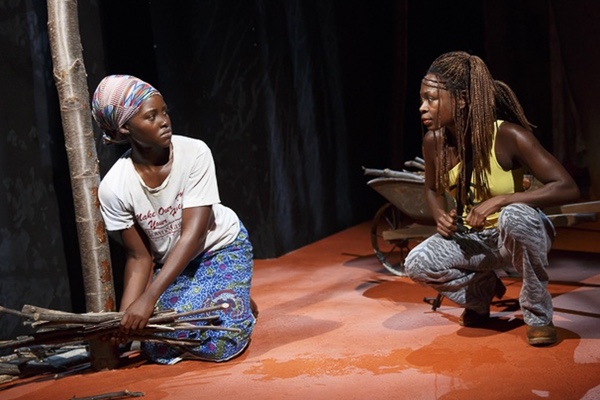 Danai Gurira’s powerful and electric new play, Eclipsed, opens in the middle of the Second Civil War in Liberia, around 2000. A group of women who have been captured and turned into sex providers for a rebel military commander have been so badly subjugated that they no longer refer to each other by their name, but just numbers that correspond to what woman they are in the commander’s stable. They have lost all individuality, are scared to death of the commander and are trapped in a jungle hut, listening to gunfire from the war zone.

The play, which just opened at the Golden Theater on W. 45th Street in New York, explodes from there. The women bicker back and forth about their role. One becomes the leader of the disheveled pack, another gets pregnant and a third winds up as a soldier in the rebel force. Another, carrying a rifle, is already a soldier in the war and tries to convince the others to join her.

The main theme of the play is the physical and emotional repression of the women caught in the middle of a vicious was that has lasted nearly ten years. A secondary theme is the point of the war itself. Who is right? Finally, as in all war stories, there is the idea of power. The women in the play feel enormous power when they begin to fire rifles and kill people.

The story begins slowly and at first is the tale of females sexually subjugated to the military leader, whom you never see (it is an all-female cast).  The tough talking, strutting  woman soldier, who is gorgeous, is the catalyst of the story as she prowls around the house, and nearby jungle, her rifle swaying this way and that. She wants the girls to fight for their freedom, as she does, and drive autocratic Liberian President Charles Taylor from office. During the play, you hear numerous chopped up radio broadcasts about the war and, at the end, the rebel drive on Monrovia, the nation’s capital.

Eclipsed is the story of the struggle of the women to recapture their identity in the middle of an awful war that has torn apart the entire country.

More than that, Eclipsed is a story about all wars and all men and all women. Go back to the Trojan War. The American Revolution. World War II. Vietnam. Iraq. Women have always been caught up in military conflicts, always been a key factor in victory and defeat and almost always ignored. Here, in the Liberian conflict, the women represent females trapped in a familiar spot, living at the leisure of a male authoritative figure. At the same time, though, some of them argue that the fight is theirs, too.

The action centers around the ‘wives’ of the Commander, but the ‘woman in white,’ a representative of a woman’s peace group working to end the war, becomes the key figure in the play. She begs, she cajoles and she pleads in a super human effort to stop the relentless killing. For her work she is nearly murdered.

There is much history in the play and it presented well. There are the radio broadcasts, the dialogue of the woman soldiers, the peace force representative and others. You learn a great deal about the conflict. The playwright might have added more, though, such as how the war began (it was one civil war, a peace, then a second war over a decade). Most Americans do not know very much about Liberia or the conflict and need to be told. Most Americans do know a lot about the scarcity of women’s rights in Africa (pick a country) and are familiar with the way young women are sexually subjugated (the more than 200 school girls snatched a few months ago from a school in Nigeria by the Boko Haram). So the play’s story of the women, and war, rings true to American ears.

The key to the story, and the drama in the play, is the work of the “woman in white,” from the peace organization (supposed to be the real life Women of Liberia Mass Action for Peace). Those women, and she was a good example, worked tirelessly to bring both sides together, pressing both sides on what they were fighting for in the first place. At the end of the war, some 3,000 of them staged a mass protest that helped bring about a ceasefire. Her role in working with the women in the story is critical to the success of the play.

There seems to be an end to the saga at the end of the play, but  then there is a final terrifying scene, a last moment, when you are kicked back in your seat and forced to wonder if what you think will happen actually transpires. It is one last jolt in two and half hours of strong jolts in a sensational play.

Oscar winner Lupita Nyong’d is the ‘star’ of the play, but she is really just one fine actress in an ensemble cast of superb actresses: Nyong’d, Pascale Armand, Saycon Sengbloh, Zainab Jah and Akosua Busia. Their talent carries the story. You come to cheer and fear for them throughout the story and constantly worry about their safety. Director Liesl Tommy does a fine job of staging the play in a way that all the themes of the story are constantly in play and the audience is always bombarded with war and sexism arguments.

Eclipsed is a different play and a play that takes a while to get going, but when it does it becomes a searing saga not just about African history, but women’s history, too.

PRODUCTION: The play is produced by the Public  Theater. Sets and Costumes: Clint Ramos, Lighting: Jen Schriever, Voice and dialect Coach: Beth McGuire. The play is directed by Liesl Tommy. It has an open-ended run.