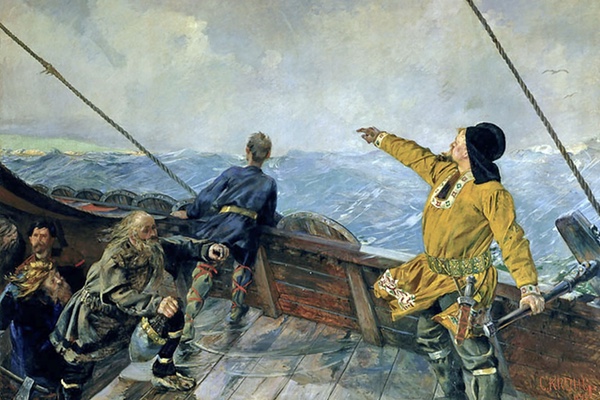 In a room at the Árni Magnússon Institute for Icelandic Studies in Reykjavik there is a thirteenth-century manuscript of sheep vellum called the Hauksbók. As is the manner of many such caudexes, there are several texts sewn together. There is something sobering to remember that the corpus of medieval literature basically survives in the form of the ink-stained skin of animal corpses. In this particular book there is one line that stands out, in the middle of a narrative about a group of Nordic men venturing out from their settlements in Greenland to an undefined west. It reads, “He was tossed about a long time out at sea, and lighted upon lands of which before he had no expectation. There were fields of wild wheat, and the vine-tree in full growth.”

This is from The Saga of Erik the Red, and it recounts his son Leif Ericson’s discovery of a heretofore unknown land he designates as “Vinland.” Alongside The Saga of the Greenlanders, it constitutes what has come to be called The Vinland Sagas, an Icelandic quasi-historical first account of European interaction with what came to be called America. The sagas were written centuries after the events; initial Norse interaction with North America occurred in the tenth century before the turn of the first millennium, and the Vikings left no enduring presence in the New World. Despite this, they have held a hold on the imagination of those who desire to separate myth from history in understanding the peopling of the Americas.

For most of their history the sagas were interpreted as fantastic accounts owing everything to myth and little to history. They were categorized alongside accounts such as St. Brendan’s, the Irish monk who supposedly sailed to the Americas, or the Welsh prince Madoc who followed that same direction. Until a half-century ago normative history had it that Christopher Columbus was the first European to espy the American continents. This changed fifty-five years ago with the discovery of a temporary Viking settlement at L’Anse aux Meadows on the northern tip of Newfoundland by a married Norwegian couple, Helge Ingstad and Anne Stine Ingstad. As an example of myth and literature being used as a clue to objective historical reality, the Ingstads’ discovery ranks with Heinrich Schliemann’s excavation of Troy in the nineteenth century based on his readings of Homeric epic.

For five decades the site at L’Anse aux Meadows was the only confirmed location of Norse colonization in North America. This is despite more spurious claims of evidence for a more expansive Viking presence, from hoaxes like the Kensington Runestone in Minnesota (a bit far afield for the sea-faring Norse) to the Maine Penny, a Norwegian coin found at a site much further south than L’Anse aux Meadows whose provenance is less suspect, and could at least demonstrate Indian trade of European objects.

There is now better proof of what archeologists have long assumed – that the Norse presence in the Americas was wider than we had evidence for. Based on both satellite surveys from space, and now actual ground excavation, archeologist Sarah Parcak has announced the confirmation of a Norse site at Point Rosee Newfoundland, three hundred miles south of the one discovered by the Ingstads fifty-five years ago. As she describes it in an interview with the Washington Post, it’s “the westernmost Norse site that’s ever been discovered.” The article conjectures that if Parcak can confirm that the site was more permanent than transitory that it could lead to the confirmation of more locations, with the potential to “to rewrite the history of the Vikings in North America.”

Pre-Columbian trans-Atlantic contact has long been a source of fascination for scholars and lay people alike, seemingly from the sixteenth-century Age of Discovery itself onward. No less a source than Columbus’s own son claimed that the mariner had heard a legend of dead “Indians” blown off-course from the west washing up on the shores of Galway Ireland. Sixteenth and seventeenth-century writers hypothesized about contact between the Old and New World having happened long before Columbus’s “discovery.” In his The Limits of British Empire (the first text to apply that particular designation to that country) Elizabethan court astrologer John Dee argued that the Welsh Madoc’s discovery of the Americas usurped Spanish claimants to the continent, with the Queen’s Celtic genealogical roots confirming her as the true inheritor of the New World.

The belief that the American Indians are the descendents of the ancient Jews is central to the Church of Jesus Christ of Latter Day Saints. The legend of Madoc was even explored in the Romantic poet Robert Southey’s epic poem named after the prince. And a perusal of the Internet will find arguments and “evidence” (some provocative, some less so) that groups ranging from Egyptians, Phoenicians, Romans, West Africans, and the Chinese had a toe-hold in America before 1492. But the only non-American Indian group that has been confirmed as having a pre-Columbian American presence is the Norse in Canada.

The fascinating and excellent work of archeologists like Parcak and Helge and Anne Stine Ingstad provides us with an opportunity to consider what exactly the work of history is. The possibility of Roman ships crashed along the Brazilian coast, or African princes inspiring the Olmecs are fascinating, not to mention dramatic and romantic. There are obvious political and cultural ramifications as well. Columbus’s voyages were once-taken as a point of pride among Catholic and specifically Italian immigrants who wished to demonstrate their right to belong in an Anglo-Protestant dominated country whose very name was, after all, an Italian one ending in a vowel. Today however Columbus’s voyages are justly seen as acts of ethnic cleansing, first in a long and shameful history of genocides which often marked contact between Europeans and the original Americans. The question of “Who discovered America?” has never been a neutral one, and one whose significance and implications are forever shifting.

But it’s also a question that is in many ways a category mistake, because no matter what the evidence of which group was here first, the answer is that the nation itself was never “discovered,” it has only ever been “invented.” We need to recover the work of the brilliant Mexican critic, historian, and philosopher Edmundo O’Gorman who in his 1958 book, The Invention of America, investigated the way complex cultural, literary, theological, and political discourses combined together to synthesize a constructed reality called “America” which was then projected onto the literal landmasses of the western hemisphere already inhabited by people who came to be called the Indians, and which may or may not have been visited by any number of other groups over the millennia.

O’Gorman argued that “America” was an intellectual concept more than it ever was an actual place, and that a close reading of those initial texts of discovery in the late fifteenth and early sixteenth centuries demonstrate the way in which these newly rediscovered lands were transformed into something called “America.” In this way, the Vikings, or Phoenicians, or Egyptians, or even the Indians could not have “discovered” America for it was never a thing to be discovered, only to be invented. As O’Gorman writes, “the American continent had always been there patiently waiting throughout the centuries to reveal itself to the first man who, as in a fairy tale, would come to touch it.” In this formulation the “discovery of America” has less to do with who was where when, than it does with the projection of European myths as varied as the Hesperides, Atlantis, Cockaigne, Ultima Thule, and after Columbus and Vespucci’s voyages Utopia, onto the American continent.

This is important because it reminds us that history is a liminal discipline, between the world of objective fact and the mythic one of human representation. History is the lens through which we analyze what has happened, but also what humans have believed about what happened, which are often equally crucial. In this way history can never quite be a science, but rather it is the borderland between empiricism and imagination. Thus we remember that America was neither discovered on the rocky shoals of Newfoundland nor the white sand beaches of the Caribbean, but rather invented in the vellum and parchments of those who reported these trips.