What Would Eleanor Roosevelt Think of the Fight for Equal Pay for Equal Work?

Brigid O’Farrell is an independent scholar affiliated with the Eleanor Roosevelt Papers, a sponsored project of the George Washington University, and the author of She Was One of Us:  Eleanor Roosevelt and the American Worker. 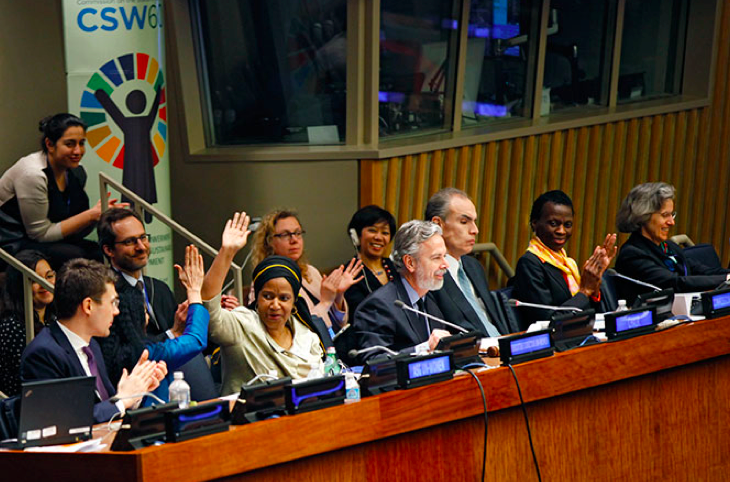 “The dignity of women’s equality when they meet in government, professional and industrial work is important the world over, not just in the U.S.” --  Eleanor Roosevelt, 196

Tuesday, April 12, is Equal Pay Day in the United States, symbolizing how far women have to work into 2016 to match what men earned in 2015.  Women earn only 79 cents for every dollar a man earns.  In 1960 the pay gap was 60 cents for every dollar a man earned, but just how far have we come?  Within the framework of the United Nations, Eleanor Roosevelt provides historical context on the progress towards equal pay around the world.

In March, over eight thousand women from across the globe gathered in and around the United Nations in New York City for the 60th meeting of the UN Commission on the Status of Women (UNCSW).  The priority theme for this gathering was women’s empowerment and its link to sustainable development. The meetings addressed many serious and pressing problems such as violence against women and girls, sex trafficking, poverty, water and sanitation, and the effects of climate change. 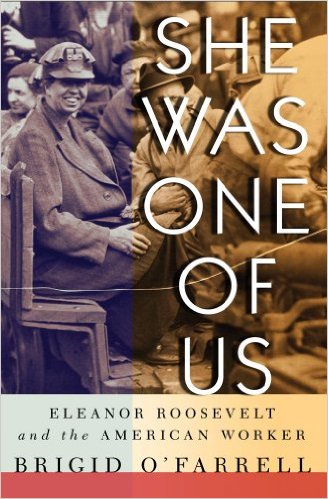 Yet central to women’s empowerment is their ability to participate in the paid workforce without discrimination in pay or occupation. Poverty and economic inequality for women and their families is directly related to the continuing gender pay gap and its relation to occupational segregation where men are concentrated in higher paying jobs, while women are found in low-wage jobs where their work is traditionally undervalued. One UN goal (SDG 8.5) aspires to achieve “full and productive employment and decent work for all women and men, including for young people and persons with disabilities, and equal pay for work of equal value,” by 2030 (SDGs). This goal is part of a long history.

Over 100 years ago, Eleanor Roosevelt volunteered for the Consumers League in New York City and one of their founding goals was “equal pay for equal work.” As First Lady she took this principle to the White House where at an early press conference in 1933 she declared  “only where they are organized do women get equal pay for equal work.”  In 1946, Eleanor Roosevelt accepted President Truman’s offer to become a U.S. delegate to the United Nations and her fight for equal pay continued on the international stage.

Roosevelt was strongly influenced by her new international colleagues.  On 21 June 1946 the Commission on the Status of Women (CSW) was formally recognized at the United Nations and led by Bodil Begtrup of Denmark, an international champion of single mothers and children.  While well aware of the few number of women at the UN, Roosevelt had hoped that women would be represented on all committees and delegations without need for a separate commission.  She was soon working, however, with Hansa Mehta, of India, an educator, activist and one of the few other female delegates to the UN, as well as Begtrup and the members of the CSW, to strengthen the language for women in the Universal Declaration of Human Rights.

In 1948, long and late discussions were underway to craft the Declaration under Roosevelt’s guidance as chair of Human Rights Commission.  The debate around Article 23.2 wasn’t about including or excluding the concept of equal pay for equal work, but about how to make the language surrounding equal pay inclusive and strong.  Final consensus was reached with the wording “Everyone, without any discrimination, has the right to equal pay for equal work.”

Shortly thereafter, the International Labor Organization, based on a study with the CSW, passed the 1951 Convention on Equal Remuneration for Men and Women Workers for Work of Equal Value, establishing the principle of equal pay for “work of equal value.”  This then became the goal of the UN documents that followed, from the Convention on the Elimination of All Forms of Discrimination against Women (CEDAW, 1979), the Beijing Plan of Action (1995), to 2015 and the Sustainable Development Goals for 2030.

By 1961, when Eleanor Roosevelt chaired President John F. Kennedy’s Commission on the Status of Women, she was part of a nation-wide campaign for legislation to guarantee equal pay for “work of equal value.”  Congressional compromise, however, led to the Equal Pay Act of 1963, limited to “equal pay for equal work,” which remains the current national goal.

Equal pay for “equal work” and equal pay for “work of equal value” are both important concepts.  The most current UN report finds that on average women earn 24 percent less than men or 76 cents for every dollar earned by a man.  The pay gap ranges from 33 percent in South Asia to 14 percent in the Middle East and North Africa. In some countries the wage gap has narrowed because men’s wages are falling, but positive changes are reported in Brazil, Malta, Nepal and Ukraine where real wages have increased and women’s wages have grown faster than men’s, resulting in a real narrowing of the gender pay gap. Globally, however, the gap persists.

There are several explanations.  One is clear discrimination where women are simply paid less for the same work.  This can be addressed by legislation, but effectiveness is dependent on implementation and enforcement.  The wage gap is narrower for women who belong to unions, both because the unions can negotiate equal wages and the data are publicly available in the collective bargaining agreement.  In a recent survey of over 23,000 working women, however, the AFL-CIO found that the economic issue that most motivates action for working women across generations and demographics is “equal pay for equal work.”

A second reason is the continuing occupational segregation, where the work traditionally associated with women is undervalued despite the education or skill requirements.  This is maintained through training and education systems and cultural norms, as well as by discriminatory hiring practices that keep women from entering higher paying occupations. According to the UN report, women’s share of craft trade jobs, for example, was 17 percent, while women were 71 percent of clerical and support workers. This calls for policies to remove barriers, but also to reevaluate work done by women.

“Equal pay for work of equal value,” was championed at the CSW meetings by the Global Unions, representing more than 70 million working women worldwide including those in the United States.  Barbara Byers, Secretary-Treasurer of the Canadian Labor Congress, presented the union statement before a full meeting of CSW member states.  She declared that decent work for women and men is a trade union priority, but noted that women are the majority of the working poor and expressed concern for young women in particular.  In concert with other sister non-governmental organizations (NGOs) she called for quality public education, affordable public health and social care, and living minimum wages.  She supported measures to eliminate early and unplanned pregnancy, child marriage, and gender-based violence at home, in school, and at work.  And she very specifically called for equal pay, not for equal work, but “equal pay for work of equal value.”

Over 160 trade union women attended the CSW.   There were union panels including garment workers, care workers, and tradeswomen from around the world discussing decent work, collective bargaining, organizing, and the UN goals.  For the first time, the AFL-CIO held a Global Women’s Leadership Program for 50 US trade union women.

Member state delegations negotiated resolutions, conclusions, and the agenda for the coming year. After two weeks, consensus was reached on a document called “Agreed Conclusions.” Among many issues addressed, the final compromise language calls for “equal pay for equal work or work of equal value.”  The debate about equal pay and how best to achieve it will continue as part of the work of the CSW  for 2017.

In a 1952 My Day column Eleanor Roosevelt acknowledged that putting things in writing didn’t necessarily accomplish much.  “It will be the people,” she wrote, “who will have to bring about these changes.”  Thousands of women discussing issues such as “equal pay” at the United Nations is one important way to continue the push for further progress when they return home.  The 2016 campaign to elect the first woman UN Secretary-General in seventy years might just add to progress as well.