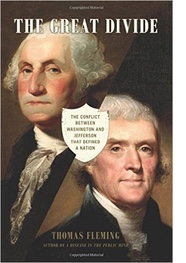 On April 5, 2016, The New York American Revolution Round Table named Thomas Fleming’s The Great Divide, The Conflict Between Washington and Jefferson that Still Divides America the winner of their annual award as the best book of 2015. Previous winners include Mary Beth Norton of Cornell, Andrew Jackson O'Shaughnessy of the University of Virginia, and Maya Jasonoff of Harvard. The Round Table has been meeting for more than a half century. They have always featured leading historians discussing their latest books. In recent years David McCullough, David Hackett Fischer and Gordon Wood have accepted lifetime achievement awards and responded with inspiring talks on America's early years.

The Great Divide describes the tensions and disagreements that slowly eroded the friendship between President Washington and the author of the Declaration of Independence, whom he made his secretary of state. Jefferson was in France as America’s ambassador and did not participate in writing or winning approval for the new Constitution. He disliked the document from his first reading. He found particular fault with the office of the president, which he considered much too powerful, and likely to create a dictator or a king.

Washington had made a strong president, coequal with Congress, a central idea in his concept of the new government. He strongly approved Secretary of the Treasury Alexander Hamilton’s program to create a Bank of the United States and use it to pay off the Revolutionary War debt and launch the country toward a commercial destiny. Jefferson saw a very different future. He wanted America to remain a nation of farmers, free from the corruptions of business and industry. He was even more dismayed by Hamilton’s argument that there were “implied powers” in the Constitution which enabled the government to take this shape and direction. The Secretary of state referred to the stock in the Bank of the United States as “federal filth” and maintained that any Virginian who did business with the bank could and should be tried for treason and executed.

When war broke out between Revolutionary France and Great Britain, another set of differences arose. Jefferson strongly opposed President Washington’s Declaration of Neutrality. The Secretary of State called France’s revolution his “polar star” and gave support and confidential information to a new French ambassador, who ignored the proclamation of neutrality and sneered at “Old Man Washington.” Jefferson repeatedly tried to convince the president that Hamilton and the men around him were plotting to launch a monarchy. Washington told him he was the last man in the world who would tolerate an American king. Jefferson resigned in disgust and declared he was through with politics. Behind the scenes he advised his two influential followers, Senator James Monroe and Congressman James Madison, on how to oppose President Washington’s policies. Jefferson also sponsored a newspaper, The National Gazette, edited by a man on the State Department’s payroll, who savagely attacked Hamilton and ultimately, Washington.

Edward Lengel, editor of the Papers of George Washington, has praised The Great Divide for the way it “compellingly captures the drama of this clash of titans, showing how its outcome made the difference between national ruin and prosperity.” Stephen Brumwell, winner of the George Washington Book Prize, said the book was a “gripping exploration of a conflict between realism and idealism that still resonates today.”