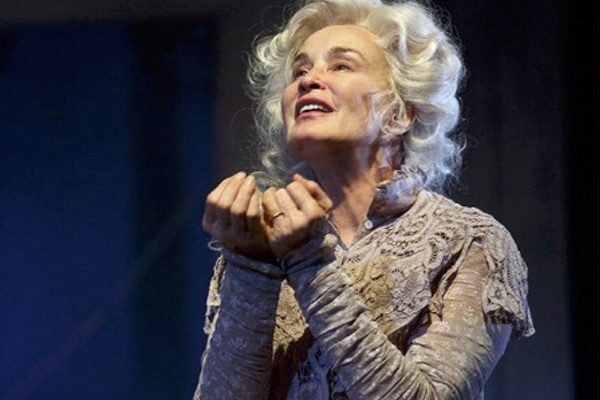 Eugene O’Neill’s classic play Long Day’s Journey into Night, a look at a truly dysfunctional 1912 family, has been revived again and again across the world for decades and is getting its latest, and one of its greatest, revivals now in New York. It is a gut wrenching, emotionally charged and completely wonderful play, a work that has stood the test of time and put O’Neill into the pantheon of world’s great playwrights. The play, a production of the Roundabout Theatre Company, stars Jessica Lange in a mesmerizing performance and is the icing on this season’s cake of good history plays.

The play, that opened last week at the American Airlines Theater, at 227 W. 42d Street, is the story of the Tyrones of Connecticut. James senior is a veteran actor who long ago sold his soul for a play he has taken around the country for years and which in he made a substantial amount of money. His wife Mary is a badly failing drug addict. His son Jamie is an unstable alcoholic and his son Edmund is suffering from a bad case of consumption (tuberculosis). Through one long day, and its night, the family battles its afflictions and each other and, minute by minute, hour by hour, try to travel back in time to the 1880s and 1890s and change the courses of their lives, which have turned out so miserably.

The problem the Tyrones have, as the play opens, is that mother Mary has recently returned from a sanitarium where they treat “dope fiends.” As she says scornfully, she is supposed to be off the drugs, in her case morphine, but she is not and as the day continues she falls apart from her renewed addiction. She talks endlessly of history and her past, and how she wanted to change it. Why did her small child die? She wails. Why did the difficult, hotel room birth of son Edmund make her a pain killer drug addict? She asks, but does not admit to the answer, which is that she did it, not society. The Tyrones love each other and try to help each other, but by 1912 they are sinking as fast as the Titanic, that went down that same year. This is a play about a single day in which they all confront their demons, and each other, and try to make sense of a cruel world in which many things have gone very wrong for them.

In the play, you learn much about life in America in 1912. Today drug addicts have numerus medications to help them and extensive treatment programs. There are 28 day programs and ten month programs and they take place at both large and small drug rehab centers. Today Mary would get a lot of help but in 1912 all they did for her was “dry her out.” Jamie, the alcoholic, drinks all day and even ravenously gulps the watered down drinks that the maid leaves him, so inebriated by then that he can’t tell the difference. In 1912, there was no real help for Jamie, and certainly not an AAA for comfort. Edmund, who has consumption (tuberculosis) is coughing himself to death and ready to move to a sanitarium himself, furious at his frugal father for booking him into the cheapest health facility he could find.

Much of the world of 1912 comes alive in the play, such as the atmosphere of small cities around the country where Tyrone takes his play, his wife Mary dragged along and stranded in small, raunchy hotel rooms while he gets drunk at the neighborhood bar. State supported sanitariums, and their costs, are investigated, as are small drug stores and their policies (there is a wonderful scene in which Mary gets her maid to pick up pain killing medicine that she uses as dope, under the guise that it is medicinal help for her arthritic hands, just as so many people with drug woes do today).

The striking thing about the story, written so long ago, is that it could take place today. We certainly have a lot of drug addicts today. You want alcoholics? There are a lot of them, too. Fighting spouses? Half the country is divorced. Generation gaps today, like in 1912? Plenty of them. Mothers and fathers who just can’t handle life in 1912? We have plenty of them today, too.

The Tyrones are broken people, wounded warriors of 1912, just like all the broken and wounded people of 2016 America.

O’Neill gets the audience to love these people and feel sorry for them, pity them and yet, at the same time, become angry at them for not taking the steps they should. Most of all, you want to shout at them to forget the past and worry about the present and future before they are all overwhelmed by them.

The characters are lethal and the things they say to each other, and about each other, make you cringe. At the start of the drama you laugh at those lines of attack, but as the hours speed by the barbs are really offensive, deeply hurting, and you feel the knife cutting you just as deeply as it cuts the characters in the play. These people, all lacking in self-esteem, tear each other apart in an effort to gain redemption.

Director Jonathan Kent does a splendid job of letting the characters roam about the house, and the year 1912, and develop as the story unfolds. The original language of the play is a bit out of date, but you would not know it the way that Kent oversees the action. He makes the play move along quickly, too. It is three hours and forty five minutes long and seems like no more than half an hour.

Kent gets superb performances from Gabriel Byrne as the father, Michael Shannon as Jamie, John Gallagher Jr. as Edmund and Colby Minifie as the maid.

The star of the show, though, is the multi-gifted Jessica Lange. She is a pathetically majestic Mary Tyrone. She yells and pouts and drifts about the stage as a half woman and half ghost. She leans lazily across tables and waves her hands ever so delicately in the air. Lange constantly nods her head, slower and slower as the morphine takes control of her body. Her long, delicate fingers are always playing with her hair or caressing her throat. You love and pity her at the same time. She is one of the great characters in theater history and Lange makes her a monumental presence on the stage.

Long Day’s Journey into Night is one of the finest history plays ever, a glistening moment in entertainment.