Sad Songs about Gay Life in Great Britain in the 1960s 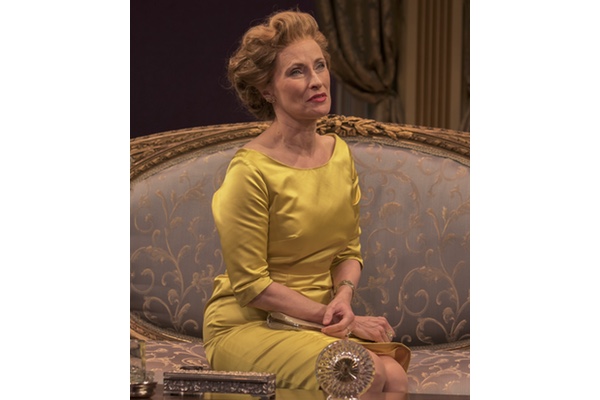 In the early 1960s, it was still a crime to be gay in Great Britain. The authorities put you in jail for it. Homosexuals sneaked around the country, shuffling across the platforms of train stations, heads down and overcoat collars pulled up over their ears, driving cars on dark city streets always looking over their shoulders and walking down quiet country lanes, hands shoved deep into their pockets to appear utterly heterosexual. Gay couples, men or women, shared both their tragedies and triumphs alone, off in the twilight somewhere. It was a cold, hard world.

This repressed existence comes to life in A Song at Twilight, fabled British playwright Noel Coward’s final work, that gets a very tender, emotional and yet wildly funny presentation as the summer season premiere at the Shakespeare Theatre of New Jersey, at Drew University, Madison, N.J. The play, set in the early 1960s at a Swiss hotel, that opened Saturday, is full of the biting sarcasm and bawdy humor that made Coward such an internationally famous author. It has four rich and wonderful characters who joust with each other throughout the night about everything from the way to drink brandy to how to write a memoir. It begins with sharp humor but then descends into sadness.

Coward’s play does not start off as a story about homosexuals at all. Hugo, a brusque, no-nonsense literary superstar, and a grade ‘A’ pompous ass, in his 60s or 70s, gets a call from an old flame, Carlotta, who lived with him for two years long ago. She wants to see him about something after all this time and he has no idea what it is.

She arrives wearing the most dazzling pair of shoes you ever saw and has a dinner with Hugo that is howlingly funny. A little tipsy from drinking, she does a sing-a-long with Hugo’s incredibly good looking butler/pianist that draws waves of laughter from the audience (there is the hint that Hugo loves him). Carlotta cavorts. She twirls. She throws back her head and flings out her arms. She is a lovable tornado. Hugo must have loved her, right?

And then there is Hugo’s current wife and secretary, Hilde, who brings a great deal of history to the story. The love of her life, a poet whom she married, was murdered in the Nazi Holocaust in Germany. She later married Hugo and takes care of him and nurtures him probably a bit more than she actually loves him. She is funny and loving and has tried to carve out a nice life for herself, although she never forgets her first husband. This play was written in 1965, just a generation removed from World War II. The British still hated the Germans, whose air force killed tens of thousands of Brits in bombing raids during the conflict.

So what does Carlotta want? She asks Hugo for permission to quote love letters he sent her in her autobiography and he refuses. Then she drops the bomb – she has Hugo’s letters to the love of his life, a man named Perry Sheldon, who died two years ago. Hugo is shaken. He did not know that Perry had passed.

Can Hugo blackmail her into not publishing of talking about the letters to Perry? Will there be a storm in the literary world if she does? What does the quite affable Carlotta really want? Will Hilde get involved in the dispute? How deep was Hugo’s love for Carlotta? For Perry? Who else knows about Hugo and Perry? Do the police?

The play is supposedly an autobiographical sketch of Coward, who never seemed to publicly admit everything about his sexual bent.

Gay life in Great Britain was excruciatingly repressive until the passage of the 1967 bill that made homosexuality legal. Prior to that hundreds of men and women were jailed for homosexual acts. Men were imprisoned just for sitting on a park bench and smiling at another man they thought was gay. Alan Turing, the genius who broke the secret Nazi codes during World War II, was arrested in 1952 on charges of being gay and forced to take hormone drugs. He eventually killed himself.

The Shakespeare Theatre at Drew always has magnificent sets, but they have reached new heights under set designer Brittany Vasta in A Song at Twilight, with a rich hotel room with its own large, star lit balcony reached by French doors. There is a fine piano, played well by actor Ben Houghton (Felix), large and comfortable chairs and couches and a dash of elegance just about everywhere.

The play has some structural weaknesses. As an example, the criminal status of homosexuality should have been discussed more because it helps to explain why the affair between Hugo and Perry had to be kept secret and why Hugo, all of his life, had to disguise his sexual leanings. There should also have been in the story about the death of Hilde’s poet husband in the Holocaust. How did he die? Why was he unable to escape or avoid detection? Why did Hilde escape death? Is she Jewish or not? How did Holocaust survivors get to Great Britain just before the war. That discussion would have helped to enrich the story and also add even more history to a play full of British and sexual history.

Director Paul Mullins did a superb job with the play. He has kept it simple and let Coward’s solid and touching story carry it (no naked men in it as there have been in previous productions). Mullins gets four star performances from his actors. Edwin Genest is sensational as Hugo as he strides across the room with great majesty in some moments and erupts in rage in others. Ben Houghton is good as the laid back, always at your service butler Felix. Alison Weller is a delight as the German wife, drinking herself into a tizzy and carrying on while wearing an absolutely ridiculous hat.

The star of the show though is tall, thin, gracious Laila Robins as Carlotta, who arrives as a storm and then intensifies. She is audacious, domineering and incredibly funny. She sees the humor in every turn of the story, shouts and howls and yet, at critical junctures, is soft and tender. And always, always she seems to wonder why Hugo never loved her as much as he loved Perry.

The irony of the play, of course, is that the lives of gay men and women in the UK and in America today are so different than in 1965. Homosexuality is still not embraced and gay people still have their troubles, but their lives are better today, if not completely satisfying. There is more tolerance and understanding by the public of gay people and even gay marriage. Is it enough? No. Is it more, though? Yes.

It was a surprise for the Shakespeare Theatre to kick off their season with this play, but it turned out to be a smart idea. Let’s just hope the rest of their plays are as good as this one.