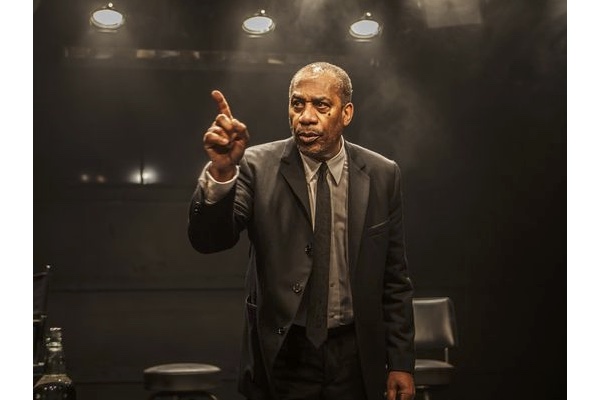 One of the most popular and searing comedians of the 1960s was Dick Gregory, who later became one of the nation’s most outspoken civil rights figures. Utilizing a brutally direct style and scathing jokes about racism and politics, Gregory enjoyed a career on top of show business that lasted decades and brought him enormous praise and respect from the American public.

The African American Gregory, a skilled track runner in high school, went into college and then the army and started his career as a stand-up comic. Afterwards, he drifted into night clubs and then television. He became one of the most successful entertainers in America. He used his fame in entertainment to help numerous civil rights groups succeed in their marches and rallies.

All of that is part the story told by Joe Morton as Gregory in a powerful, dazzling, dynamic, unforgettable new play, Turn Me Loose: A Play about the Comic Genius Dick Gregory, at the Westside Theater, in New York. Morton is, in a word, simply terrific.

The play showcases the perfect merger of Gregory’s talents as a comic, with parts of his original, biting routines in the show, and his success as a civil rights activist, a role that brought him together with Martin Luther King Jr. and others. There is not an ounce of fat in the stellar, and very funny, script by Gretchen Law. Gregory hurls one thunderbolt after another at the audience and all of the targets he shelled in his long and legendary career (he is 83 today and can still be seen in numerous You Tube interviews and heard on talk radio stations).

The play is set, appropriately, in a nightclub. The brilliant Morton, as Gregory, does his comedy routines there and rambles from one end of the stage to the other, often sitting on the edge of it to deliver parts of his numerous monologues. The back rear of the stage is a tiny night club dressing room. Morton moves easily between the roles of performer and parade leader, intense and determined every step of the way, angry as hell, whether it is joke by joke or rally by rally.

Morton, the veteran actor most famous as Eli Pope in the hit television series Scandal, is a revelation as the comic. He plays him as a buoyant young man and, later, as a tired and decrepit old one who addresses the audience bent over and shuffling slowly across the stage. He tells his show business and protest story and, too, tales about his wife, Lil, and his ten (yes, ten) children. Morton captures the originality and vitality of Gregory, a volcano of a man. Rarely has one actor so completely caught the persona of his on-stage character.

Gregory shot to stardom in his twenties when he was spotted in a Chicago nightclub in 1961 by Hugh Hefner, the owner of Playboy magazine and the string of nationwide Playboy clubs. Hefner booked him into the Chicago Playboy Club and Gregory regaled audiences right away with a new and different style and a machine gun delivery of jokes about bigots and rednecks.

He was asked to come on the Tonight Show, whose host was then Jack Paar, but he made history by refusing. He would not do it, he told Paar, because Paar never invited the black comics on his show to sit down on his couch to talk, as he did with all the white comics. Five minutes later Paar called back and invited Gregory on to the show and on to his couch. Gregory made history with his numerous appearances on the Tonight Show and other talk shows.

In one of his funniest bits, he tells of sitting down in a white only restaurant and ordering a fried chicken. Several rednecks surround him and threaten him. “We’re gonna do to you what you do to that chicken,” one of them bellowed. Gregory pursed his lips and kissed the chicken – on his butt. “Line up, guys …” he then told the men.

In another one of his long cherished bits he sits down at a counter and is told by the waitress, “We don’t serve Negroes.” Gregory then shoots back, “That’s all right; I don’t eat Negroes.”

The things people probably remember about Gregory were his famous hunger strikes in support of his causes. If he was angry about something he just started a hunger strike to draw attention to the issue and went hungry for days, garnering enormous international publicity while doing so.

But none of those bits or his memories of civil rights marches or confrontation are what make the show so splendid, and Morton’s moving performance so memorable. It is the way that Morton captures Gregory’s personality, his pure, loud, never ending insistence, throughout his life, that racism end. He explains why again and again, utilizing every argument he can think of, pleading with the audience at some points and scolding them in others.

You know he is right, too, and you know that the hatred of Latinos and women and gays is just as bad as the hatred of blacks. Gregory rails against an America that he says has grown fat and happy in its racism. America, he says, keeps changing its clothes, but underneath remains dirty.

In the play, John Carlin plays a nightclub emcee and audience member. Stephen Dexter is the understudy.

In his night club act, Morton, as Gregory, goes after schools, courts, drug companies, corporations and every politician, it seems, who ever lived.

Do you remember that famous line of Tom Joad in the film The Grapes of Wrath that he will be there wherever people are being oppressed or beaten up? Dick Gregory will be right there with him.