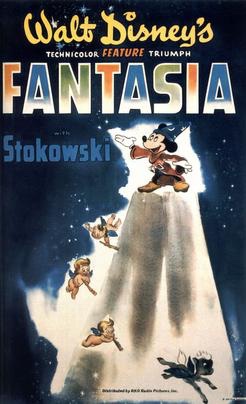 We’ve all seen the great movies from the past on television, DVDs or Netflix. There is that familiar music drifting in the background as the films unfold. We barely hear it and except for memorable hits, such as the theme from the Godfather or “Maria” from West Side Story, don’t notice the music. That’s all changing.

The New York Philharmonic, for one, has instituted a new annual series of movies in which the sound is muted and the live orchestra, on its own stage, plays the score, along with all the hit songs, as the movie unwinds on a huge screen overhead and behind the musicians. The idea is to bring live music to great films in a concert setting and to pump new life into them in front of today’s audiences.

It certainly works. I went to the Philharmonic’s screening of the 1940 Walt Disney film Fantasia at David Geffen Hall, Lincoln Center, New York, on Saturday as part of the series. The Philharmonic’s Fantasia was fantastic and the hall was jammed. The combination of historic movies and orchestral music is a surefire hit and we are bound to see more of them around the country.

The Philharmonic began the series of movies and music in 2013 with Hitchcock!, a series of film clips from hits directed by Alfred Hitchcock, and 2001: A Space Odyssey. They were very successful so in 2014 the orchestra produced similar movie and concert presentations of On the Waterfront, La Dolce Vita and scenes from other Italian films, such as Life is Beautiful, 8 ½ and Cinema Paradiso, Charlie Chaplin’s Modern Times and concerts featuring Pixar animated hits, such as Wall-E and Toy Story and Finding Nemo. In 2015 the Philharmonic made audiences an offer they could not refuse with multiple screenings of The Godfather.

Tuesday night, as part of its spring gala, the Philharmonic will present a selection of film clips and live music from composer John Williams films, such as Jaws, Star Wars and Schindler’s List. This fall, the Philharmonic movie series will continue with screening of West Side Story, Manhattan and Breakfast at Tiffany’s.

The Philharmonic is also trying to reach out to families and Fantasia is a good example of that effort. The orchestra made a big push to get families to the movie and it worked. Geffen Hall was packed with kids of all shapes and sizes and, get this, they were all really well behaved. I don’t know if it was because they loved huge, smiling dancing hippos up on the screen, could rock to the joyful music from The Nutcracker, were nowhere near their cell phones and ipods of all types or were all stuffed with candy from Lincoln Center’s concession stands, but the kids, God bless ‘em, made up a dream audience.

Fantasia, shown with Chaplin’s City Lights over the weekend, was a fine choice for the spring concert series. Back in 1940, Walt Disney wanted to revive the career of his mouse star, Mickey, and came up, at first, with the animated short The Sorcerer’s Apprentice. Then he decided to expand the short into a full feature with great historic music scores to get a generation of children interested in classical music. He got his animators to come up with different segments tied to great music, brought in Leopold Stokowski as conductor and used the Philadelphia Orchestra to provide the music. Other good music in the movie is from Pyotr Ilyich Tchaikovsky, Claude DeBussy, Paul Dukas, Edward Elgar, Igor Stravinsky and Amilcare Ponchielli,

The film featured the first stereo sound and several controversies. In the original, female centaurs were seen with breasts, so animators covered them with flowers. In another sequence, a dark colored female centaur was originally drawn polishing the hooves of a white centaur, so that was cut in later releases because it seemed to be a racial stereotype. When the film opened in New York in 1940, the final ‘Ave Maria’ segment was not finished. It arrived four hours prior to the screening and was spliced on to the end of the reel just moments before show time.

There were odd images in the film, too. Disney wanted to model the winged demon in a horror sequence after prominent horror film star Bela Lugosi, but nobody liked the image, so they modeled the demon after the director of the sequence, who never lived it down. They did not know how to choreograph the dancing mushrooms in the Nutcracker sequence, so in the end used the antics of the Three Stooges as their models.

The movie, now 75 years old, had its changing moments, too. When the film was released in 1969, at the height of the flower power era, the Disney folks gave it a psychedelic poster to fit the mood of the nation. The 1969 version of the movie, along with 2001: A Space Odyssey became a big hit with people who smoked pot in theaters. In fact, one film animator was asked at a college symposium that year what drugs the animators were taking when they made the film.

Fantasia was a hit on paper, but not at the box office because World War II was going on and European movie houses were not playing American films. Disney re-issued Fantasia after the war, though, and it was a hit. He re-issued it several times and then in the year 1999 the Disney Company premiered Fantasia 2000 as a sequel. Fantasia wound up as one of the 25 most financially successful films of all times.

Fantasia’s conductor, Joshua Gerson, a very personable fellow, an told the audience a lot about the history of the film and how it changed over the years, including the ironic tale of how the “Clair de Lune’ sequence was cut from the original but added later on. Actor Alec Baldwin has narrated past film series.

Why is the idea of old movies and a live orchestra such a good idea and why have crowds responded so enthusiastically?

First, the Philharmonic has not only shown some of history’s great old films, such as The Godfather, but an eclectic group of movies. In 2014 you could see films as diverse as Toy Story, La Dolce Vita and On the Waterfront.

Second, there is nothing like a live orchestra to make movies as good as they can be and the New York Philharmonic is one of the best orchestras in the world.

Three, orchestra halls have the best acoustics and sound systems in the country.

Four, the Philharmonic has chosen movies with the music of history’s most skilled composers in them, such as Williams, Beethoven, Stravinsky and The Godfather’s Nino Rota.

Five, you might ask yourself whether you want to go to a good concert or a good movie. Here, in this series, you can do both at the same time.

And, oh, to walk out of the concert hall on to the Lincoln Center Plaza, or the plaza of any hall around the country, with the fountain shooting thousands of gallons of music high in the night, the moon drifting overhead and the sounds of Beethoven in the air…….

More orchestras around the country should follow the New York Philharmonic’s footsteps and produce movie/concert series. An unintended consequence is that movies tend to draw a younger crowd than classical music concerts, so movie/music series should help build audiences for the nation’s orchestras.

Can’t you just picture the start of All the President’s Men with an orchestra and Beethoven’s Fifth?

There is Richard Nixon and we hear: