The 1930s and Cirque du Soleil Meet Hollywood and Vine 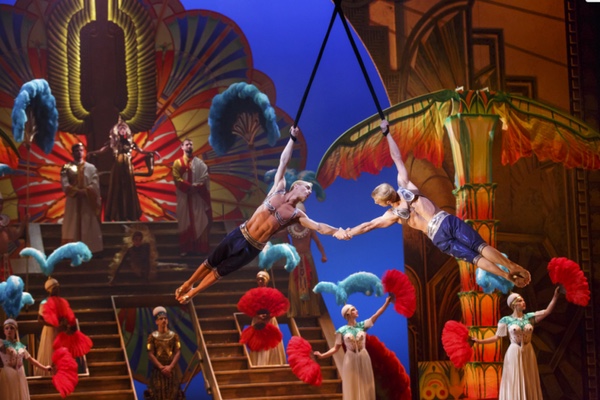 Cirque du Soleil is perhaps the most famous circus in the world, with touring companies always performing somewhere around the globe, a permanent show in Las Vegas and numerous television specials under its acrobatic belt. Now Cirque has somersaulted its way on to the Broadway stage with Paramour, a musical about 1930s Hollywood stitched in to the middle of twirling men sailing high over the audience, women springing off of and on to every prop on the stage and people in wildly colored costumes bounding up close to the ceiling of the Lyric Theatre in a new and original fantasmagoria of show business spectacle that leaves you breathless, panting and begging for more.

Paramour is the story of an unknown actress, Indigo, in her twenties, who is in love with Joey, a musician who travels with her from town to town in 1930s California, taking bit parts in stage shows. She is discovered by a famed film director in his forties, A.J., who wants to turn her first into a star and second into Mrs. A.J. She has to decide whether it is better to marry the director, who will bring her fame and fortune, or stick with her loving, dirt poor young musician.

The storyline of the musical, that opened last week at the Lyric Theatre, on 42d Street, New York, is pretty simplistic and at times downright weak and boring. You have seen the story a hundred times before in old movies. Nobody goes to this show to see how the story turns out, though. They go to see how Cirque du Soleil wraps itself around the story and how they use their famous special effects to create a wondrous new production, this time in a theater.

And that they do. The special effects begin before the show opens when two large screens at the sides of the theater show 1930s cameramen doing their job with those old style cameras. These two screens, and a huge one on stage, show tinted and black and white movies and stills that look just like 1930s movies to give the show a very historical look. Some of the stills and videos are just remarkable.

The real brilliance of the show, thanks to the skilled hands of director Phillipe Decoufle, is the way in which the circus performers and acts flow seamlessly throughout the musical and, at the same time, the way the show is staged within those circus acts. Paramour is a perfect melding of the circus and the stage show.

The show has a number of both fast paced and slow show tunes, most of which are reasonably satisfying, but not much more, and help to tell the story of the Hollywood love triangle and the mid-30s saga. They all serve as the backdrop for the breathtaking circus act numbers that seem right out of the old grainy 1930s Busby Berkeley movies.  It is in the opening song where the acrobats begin to leap high in the air, flipping over and around just about everybody on stage. From there, the circus acts build and build until they reach the remarkable finale of dozens of circus people trampolining over the rooftops of New York.

There are some exhilarating production numbers in the show. In one, the set is converted into a series of large boxes and actors move through each to give the impression of a series of frames from the reel of a movie. It is dazzling. So is the Calamity Jane sequence, in which Indigo sings amid a group of acrobats in the old west. The Cleopatra scene, too, with the legendary Queen of Nile back on stage yet again, is another well directed number. The book and music are by Bob & Bill, Guy Dubuc, Marc Lessard and Andreas Carlsson.

The circus bits in the show are all superb and you get a shotgun blast full of them. You want a twisting man in the air? You get four. You want four somersalters? You get eight. You want performers twisting and twirling high up? They seem as high as the nearby Empire State building.

There is no end to the circus numbers on stage, each soliciting loud ooohs and aaaahs from the audience. You put up with the sleepy stage musical in order to watch the mercurial circus performers.

There are numerous videos actually produced on stage and shown to the audience on the side wall screens. At one point, the entire stage is covered with a montage of newspaper clippings.

The storyline of the show evokes one big yawn. The young girl, young lover and old director love match is pretty dated material, although the three actors do a good job of handling their characters. Everything that happens in the plot is exactly what you think is going to happen and there are no surprises.

There is a lot of solid history in the show. Your learn much about Los Angeles speakeasies in the 1930s, the making of films, the history of the transition from silent to sound movies, and film publicity and marketing (this is one of the few shows, or films, that discussed the national press tours that movie companies made in the ‘30s).

There is a major historical error in the production, too. They showcase a series of 1930s movie posters but somehow, some way, in slipped posters for North by Northwest and Some Like It Hot, films that premiered in 1959.

All of these do not matter much. The show’s spectacle scenes, from start to finish, and the impressive acts from Cirque du Soleil, this time on the Broadway stage, overwhelm the negatives in the show itself. No one is terribly interested in the little love story when people start to soar overhead.

Director Decoufle gets sturdy performances from his stars, Jeremy Kushnier as the director, AJ, the lovely Ruby Lewis as Indigo, Ryan Vona as Joey, Bret Shuford as Robbie, Sarah Meahl as Gina and Kat Cunning as Lila. He also benefits from dozens of actors and performers in the show’s large ensemble cast. They all make the best of a drab story.

Although its plot is a bit forced and flimsy, the circus of the show is a bonanza for all. Paramour is a dazzling, majestic triumph for old Hollywood and all of the entertainment world.