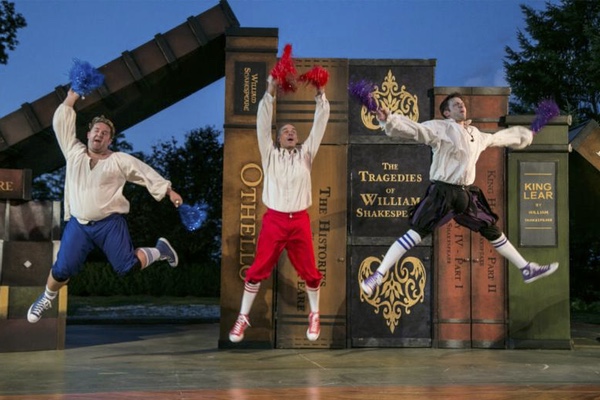 OK. Let’s have a night of blistering fun and go see a play by William Shakespeare.

Well, yes, really. If you want to have a barrel of laughs, chuckle until your insides hurt and have your eyes pop wide open, go and see The Complete Works of William Shakespeare (abridged) (revised) that just opened at the outdoor stage of the Shakespeare Theater of New Jersey, at Drew University, Madison, N.J.

It is a show in which three nimble, gifted actors portray scenes from every one of the Bard’s 37 plays (yes, even King John) in less than two hours. They howl, they dance, they slide down the sides of huge books, wrestle, browbeat members of the audience, make fun of Macbeth’s witches, Hamlet’s cohorts, both Romeo and Juliet and, in the end, leave the audiences roaring in delight.

The real surprise of the play, written by Anthony Long, Daniel Singer and Jess Winfield in 1987 and performed all over the world since then, is that it is a play in itself that parodies Shakespeare’s plays. It has its own life and energy and the trio of actors play many of the Bard’s more than 1,100 characters as the stars of the show.

The Shakespeare Theater’s outdoor stage, across the road from Drew at St. Elizabeth’s College, sports an adorable set of a dozen or so huge books stacked up as if they were on a library shelf. The actors climb up them, do monologues on top of them and hurtle down them in a madcap stage adventure.

Actor Patrick Toon opens the show with a spirited monologue, asking the question how will latecomers know that they can only be seated at the discretion of the ushers if, as latecomers, they missed the latecomers speech? Then another actor comes out and reads the biography of Shakespeare off an electronic device, but presses the wrong buttons and finds a biography of Adolph Hitler. He gets the story of Hitler and Shakespeare mixed up and the result is wonderful chaos. He fades into the background and the trio emerges as the cast of Romeo and Juliet, by way of Laurel and Hardy. They cavort through the play’s scenes, sword fights and all, and then slide into the bloody Titus Andronicus (that’s the one where half the population of Europe is killed). They stage Titus as a modern day television cooking show and it is cooking like you have never seen it before. Sufficiently warmed up, the actors (Toon, Connor Carew and Jon Barker) then launch into the other plays, such as Othello (with rapper poetry) and the history plays, staged as an American football game. The play concludes with a long and delightful spoof of Hamlet.

You would think that no one in the theater could have seen all of the Bard’s plays in order to enjoy the show, but that is not the point of the plot. The purpose of the show is to have a good time with the audience and the actors do that with great merriment. If you had never seen a single Shakespeare play, you would love The Complete Works of William Shakespeare. It is the fun the trio of performers have with the plays, not the plays themselves, that make the evening so enjoyable. The trio of Toon, Carew and Barker, who have got to be exhausted from their endless running about the stage, give audiences a very funny night on the stage, with witches, lovers, traitors and Kings bouncing about together.

At one point, Richard III limps along and shouts that famous line “a horse, a horse, my kingdom for a horse” and you are so immersed in the hilarity of the play that you really do expect a horse to trot out, or a horse suit with someone in it.

The Shakespeare Theater, that does all of its serious Shakespearean works so well, has really outdone itself with this marvelous parody. Director Jeffrey M. Bender has done a marvelous job of putting parts of so many plays together and leading his trio of gifted actors through decades of comedy, tragedy and William Shakespeare, with all of the stage history, and British history, that includes. You wonder if life in the early 1600s was as funny as this trio of actors portrays it.

Did the trio of performers forget a parody somewhere? No. They even have a Game of Thrones TV series spoof. Hey, they even take a very, very funny shot at Donald Trump.

So, if you want to see a superb comedy about the works of William Shakespeare, get thee to a nunnery (oops, get thee to the Shakespeare Theater of New Jersey) and see this very witty play.

PRODUCTION: The play is produced by the Shakespeare Theatre of New Jersey. Sets: Benjamin Kramer, Costumes: Tiffany Lent, Sound: Kari B. Berntson, Lighting: Hamilton E. S. Smith. The play is directed by Jeffrey M. Bender. It runs at the outdoor theater through July 31.