Does the Democratic Party Have a Progressive Platform―and Does It Matter?

Dr. Lawrence Wittner (http://www.lawrenceswittner.com) is Professor of History emeritus at SUNY/Albany. His latest book is a satirical novel about university corporatization and rebellion, What’s Going On at UAardvark? 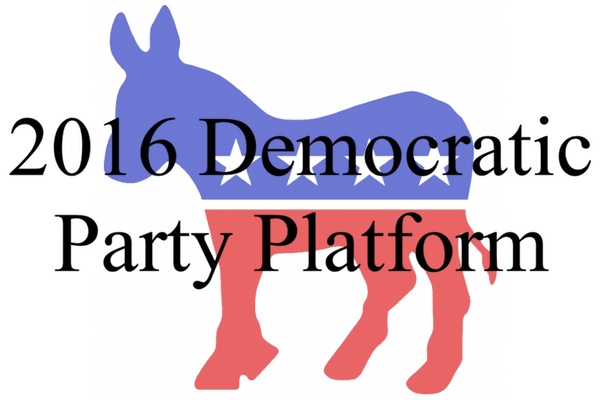 Shortly after the Democratic Party’s platform committee concluded its deliberations this July, Bernie Sanders announced: “Thanks to the millions of people across the country who got involved in the political process . . . we now have the most progressive platform in the history of the Democratic Party.”

Although the Sanders forces didn’t obtain all they wanted in their negotiations with the Clinton campaign, they did secure an avant garde platform. It calls for: a $15 per hour federal minimum wage; debt-free college education (including free tuition at public colleges for families with incomes under $125,000 per year); major financial reforms (including a financial transactions tax and revival of the Glass-Steagall Act); opposition to the TPP in all but name; a pathway toward marijuana legalization; defense of women’s and LGBTQ rights; expansion of Social Security; and the reversal of the Citizens United decision. In the area of criminal justice, it backs abolition of the death penalty, a shutdown of private prisons, and an end to racial profiling. The platform also supports important measures to fight climate change, including placing a price on carbon and empowering state and local governments to ban fracking―provisions strongly backed by leading environmentalists such as Bill McKibben. Furthermore, the platform calls for significant measures to improve public access to healthcare, such as the development of a public option for health insurance, increased funding for community health centers, and the ability to buy into Medicare after age 55.

When compared to the New Deal platforms of the Democratic Party in 1932 and 1936 or to the party’s later reformist platforms, such as that of 1964, the 2016 platform does, indeed, champion a more progressive domestic policy. When its provisions are set alongside the reactionary Republican Party platform of 2016, there could hardly be a more glaring contrast.

But what about foreign and military policy? Despite the fact that the rival Green Party has denounced the Democratic Party as a “party of war” and Hillary Clinton as a “warmonger,” the platform actually promises to “promote peace.” Although far from pacifist, it nevertheless states that “diplomacy and development” will be “especially” drawn upon “to confront global threats and ensure war is the last resort.” Along these lines, the platform supports continuing the Iran nuclear agreement, strengthening the nuclear Nonproliferation Treaty, and ratifying the Comprehensive Test Ban Treaty. Discussing the struggle against ISIS, it opposes “large-scale combat deployment of American troops.” Even though the platform does not explicitly call for cuts in U.S. military spending, there are numerous statements suggesting action along those lines, such as promises to “end the waste in the defense budget,” “rid the military of outdated Cold War [weapons] systems,” “audit the Pentagon,” and “launch a high-level commission to review the role of defense contractors.” In addition, the platform calls for “further arms control measures” and, perhaps most tellingly (in light of the Obama administration’s vast nuclear weapons “modernization” plan), opposes “expansion of existing nuclear weapons programs,” adding: “To this end, we will work to reduce excessive spending on nuclear weapons-related programs that are projected to cost $1 trillion over the next 30 years.”

In short, although the Democratic Party platform is not noticeably more daring than past Democratic platforms on foreign and military policy issues, it is not particularly warlike, either. And when compared to the hawkish platform of the Republican Party and its candidate, Donald Trump―who has blithely proclaimed “I love war” and promised the substantial military buildup and action to facilitate it―the Democrats’ supposedly “warmongering” platform seems downright dovish.

A variety of leftists have either ignored the Democratic platform or disparaged it as of no consequence, arguing the Democrats will simply abandon their promises after the presidential election. But, even if this turns out to be true, which is far from certain, a political platform, like a union-negotiated contract or an international treaty, provides a written agreement―a set of standards with which progressive forces can demand compliance. As such, it can serve as an important basis for future political mobilization, in the streets and in electoral politics.

Bernie Sanders, who, for a politician, ran an unusually policy-oriented presidential campaign, was determined to make the Democratic Party’s platform reflect the progressive issues he raised. He was remarkably successful, particularly within the realm of domestic policy but also, to some degree, in the realm of foreign and military policy. Progressives shouldn’t throw away the opportunity to demand its implementation.