Rachel Gross is a PhD student in history at the University of Wisconsin, Madison. 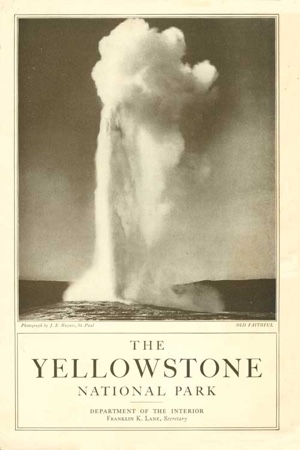 From the National Parks Portfolio (1915)

Throughout 2016, the National Park Service has promoted its 100th anniversary as a part of a “broad public engagement campaign to reintroduce the national parks.” (You can follow the #FindYourPark and #NPS100 Twitter feeds or check out the portion of the NPS website dedicated to the centennial.) The goal of the 2016 campaign is getting visitors who might not have felt welcomed or interested in a visit to an NPS site to take ownership over some place new that speaks to them. This marketing campaign has echoes of a much earlier one, from 100 years ago, with similar goals: Robert Sterling Yard’s National Parks Portfolio, published in 1915. Stephen Mather, then the Assistant Secretary of the Interior, worked with Yard to build a publicity campaign for the nation’s parks that sought to teach Americans that places such as Yellowstone, Mt. Rainier, and Sequoia belonged to them.

Contrasting the current #FindYourPark campaign with Robert Sterling Yard’s National Parks Portfolio reveals what has changed intervening century, and what hasn’t. The 1915 Portfolio received a substantial donation from railroad companies that desired to draw tourists to the park on their trains and then lodge them in company-owned hotels. In 2016, corporate interests are again at play, with Subaru and REI—among many others—underwriting the effort. The 1915 Portfolio contributed to the iconic imagery of wilderness parks: wealthy white Americans on steep slopes, encountering sublime nature. In 2016, the centennial marketing campaign retains a romantic portrayal of nature while expanding its vision of what tourists can look like. Unchanged is the pervasive nationalism, the sense of the parks as the heritage of Americans.

Robert Sterling Yard was not much of an outdoorsman but he did know how to sell nature. The portfolio he designed was a compilation of short illustrated pamphlets about some of the most well-known parks, like Yellowstone, and some lesser-known areas that Yard hoped to promote, like the Grand Canyon. The description of Mount Rainier, for instance, was accompanied by both photographs of visitors at play in their national playgrounds and short texts describing the natural wonders and amenities of the park. Assistant Director of the Interior Stephen Mather spent $5,000 of his own money, along with $43,000 raised from western railroads, to help publish the beautiful photos that would be distributed, free of charge, to 275,000 Americans.

Mather intended the Portfolio to raise awareness about the cultural resources of the parks. The photographs and text constructed a narrative of a sublime leisure space for Americans that promised something more than an ordinary vacation. The photos were a catalog of what was there—glaciers, rivers, canyons—but also offered a vision of how to visit. Grand railroad hotels and motor tours were as central to the park experience as the views.

The Portfolio also suggested that the parks ought to be a democratic playground for recreation. Mather insisted that the 100,000 people who visited the national parks in 1914 were not nearly enough: “A million Americans should play in them every summer.” Nonetheless, that democratic vision was narrow. The tourists imagined in these photos were exclusively white and well dressed. They were Americans who could afford the time away from work to vacation in parks and could outfit themselves accordingly. Though Mather hoped to instill a sense of pride and even an imperative to visit America’s natural treasures, the Portfolio images suggested that not all Americans were fit for these landscapes.

The portfolio, along with publicity work by Yard and Mather, helped to build momentum and support for an independent parks agency. Every member of Congress received a copy of the pamphlet in 1915. The next year, Congress voted to pass the National Park Service Act, which Woodrow Wilson signed into law on August 25, 1916. Frederick Law Olmsted, Jr. drafted the new agency’s mandate: “to conserve the scenery and the natural and historic objects and wildlife therein, and to provide for the enjoyment of the same in such manner and by such means as will leave them unimpaired for the enjoyment of future generations.” In the decades that followed the establishment of the National Park Service, debates about how to balance the twin needs of preservation and democratic access only intensified.

The 2016 marketing campaign evinces the long-lasting influence of this early twentieth-century promotion which established the language and aesthetic of advertising parks. Modern ads explicitly draw on the aesthetic of the railroad companies’ “See America First” posters and the now retro hip look of the Civilian Conservation Corps broadsheets. The soaring peaks and lush meadows captured in the Portfolio still shape the kinds of landscapes many Americans associate most closely with NPS. A quick perusal of Twitter feeds shows that park units like @YellowstoneNPS use photographs that draw on the visual touchstones of romantic era landscape paintings: a dramatic sky, a water feature in the middle ground that draws the viewer’s eye in, and, most importantly, a lone human figure in the foreground contemplating her or his place in world. News coverage and visitor photos at other kinds of sites, like the new Stonewall National Monument that marks NPS’s effort to recover LGBTQ heritage, suggest there has been a broadening of what counts as a historical, cultural, or natural landmark.

Transportation industries remain a key National Park sponsor, though in the twenty-first century car companies, not railroads, have prominent billing. Much like the Great Northern Railroad sought to bring tourists to Glacier National Park, Subaru seeks to brand itself as the car of outdoorsy people in search of adventure. The current NPS marketing campaign also has new types of corporate supporters. In 1915, a range of companies outfitted American elites for expensive national park vacations, but as the images from the National Parks Portfolio suggest, outdoor wear was neither as specialized nor as widespread as it is today. Recreational Equipment, Incorporated (REI) is selling co-branded cups, T-shirts, and hats that mark the NPS Centennial. Similarly, as a part of equipment company Coleman’s centennial collection, customers can also buy a “Nostalgia Lantern” or a “throw-back” cooler that commemorates the anniversary. The 2016 sponsors also include American Express and Disney, to the dismay of many. Nonetheless, a century ago NPS director Stephen Mather would have agreed that commercial sponsorship, publicity, and increased access go hand in hand with preservation.

In 1915, the biggest celebrity featured in the National Parks Portfolio was John Muir. In 2016, the NPS selected National Park “Ambassadors”—nationally-known personalities who the NPS hopes will attract visitors hitherto left out of park experiences. A key component of the marketing campaign has been to reach audiences underrepresented in park visitation, including young and, especially, non-white Americans. For examples of how the Park Service markets to potential visitors, look no further than the video of actor Rosalyn Sanchez extolling the virtues of using America’s natural playgrounds as a gym or the “Guide to Glamping” with actor Bella Thorne explaining that the parks aren’t just “for oldies.” The expansion of who is admitted to the NPS tent is welcome and important considering the decades of exclusion that documents like the Portfolio represent, however obliquely. Overall, though similar on the surface, the 2016 centennial campaign has important differences from the 1915 Portfolio, of which the most notable is the new marketing strategy’s intentional expansion of who belongs in a park. #EncuentraTuParque stands right alongside #FindYourPark.

Of course, marketing outreach cannot tell us much about people’s responses. In 1915, the National Parks Portfolio suggested that the tourist experience was central to American national identity, but the document’s insistence that “Yellowstone belongs to you” does not necessarily indicate that visitors felt that sense of ownership. In 2016, the centennial Twitter feeds seem to offer a chance to see park visitors responding in real-time to NPS prompts. But the #FindYourPark feed is laden with corporate marketers (Mountain Hardware, KOA) and organizations (Sierra Club, AAA Ohio) in a way that suggests that companies and bureaucracies, more than average Americans, are engaging with the centennial celebration.

Just as Stephen Mather and Robert Sterling Yard’s reminder that “Mount Rainier belongs to you” did not single-handedly make visiting the parks a patriotic pastime, the encouragement to Find Your Park on this 100th anniversary does not guarantee a unifying national experience. Nonetheless, even with a healthy dose of social critique, the nation’s parks remain places of great beauty and importance that can inspire awe and a sense of history. As Terry Tempest Williams said recently, the parks still remind us of what America has done right.