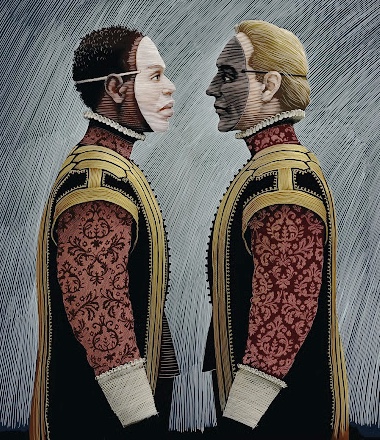 The Metropolitan Opera, in New York, made news last year when it announced that it was going to scrap its long standing policy of hiring black singers to play Othello in the opera adapted from William Shakespeare’s play. Many assumed that black singers and actors had always played Othello, but that is not true. It took more than 200 years from the play’s 1604 debut for a black performer to star in it and that man, Ira Aldridge, was drowned in a storm of racist criticism following his first London appearance in 1833. The onslaught was so bad that Aldridge lasted only a few performances and had to leave the show. The racial reverberations quickly crossed the Atlantic and no black American would play Othello until Paul Robeson in 1943.

The story of the talented and gutsy Ira Aldridge is told in a new play, Red Velvet, by Lolita Chakrabarti that opened Saturday at the Shakespeare Theatre of New Jersey, at Drew University, Madison, N.J.

It is a fascinating story. Aldridge grew up in America as a freed black man but moved to Europe because there was far more work for an African-American performer there than in the United States. He found himself in London in 1833 when a white actor scheduled to play Othello at the prestigious Covent Garden Theater fell ill. The theater begged him to step into the role, even though it had never been played by a black performer. Othello was a Moor, from North Africa, and historically a man of color and should have been played by a black actor. No theater was willing to do that and the Moor was always played by a white actor in “blackface.” England had no established black actors, either, and, over those 200 years, the theater culture did not want one as Othello, anyway.

Aldridge knew all of that and took the role anyway. He was impressive. Critics had the racial knives out, though, and denounced him in pretty vile language. The theater’s board fired him.

Everybody in the play thought Aldridge did a fine job as Othello, especially as a man pressed into service at the last moment. They were stunned by the severe racism of the reviews. The critic for the Atheneum referred to Aldridge as an animal and wrote that the lead actress in the play was “pawed about on the stage by a black man” and another critic made fun of his large lips and wondered how he could speak English with them. Previously, a critic wrote derisively of Aldridge that he was “an unseemly nigger.”

One of the reasons Aldridge was booted out of the play was that after the first performance white actress Ellen Tree visited him in his dressing room and the two, alone, shared a bottle of wine. The theater manager bellowed at him. “What were you doing?” and, as always, the black man and white woman sexual dragon raised its ugly head. It also did not help that the black Aldridge’s longtime wife Margaret was very white.

When the Covent Garden board ordered Aldridge out, theater manager Pierre LaPorte, played with fiery majesty by David Foubert, and Aldridge engaged in a searing dialogue about race and the theater and LaPorte, infuriated by what happened, kept insisting to Aldridge that the board made up its mind and no argument could sway them (you could use that in any country in any year).

Of course, the delicious historical irony of the story is that it took place in 1833, the very year that England’s Parliament passed the Slavery Abolition Act that ended slavery throughout the British Empire. Obviously, while it may have ended slavery, it did not end racism.

Aldridge DID play Othello again. He starred in the play in smaller cities in England, where critics and audiences were far more understanding of him than those in London, and carved out an impressive career that lasted until his death in Poland in 1870. He not only became an established actor in England and Europe, but in Russia, too. Oddly enough, the black Aldridge played many Caucasian character roles, such as King Lear, in “whiteface.”

This production of Red Velvet, ably directed by Bonnie Monte, unfortunately starts off very slowly and drags along at a lethal pace for about 45 minutes. Then, just prior to intermission, it picks up steam. In the second act, the play soars and audiences are left with a very moving story and, best of all, a powerful performance by Lindsay Smiling as Aldridge. This is not director Monte’s fault, but the playwright’s. For some unknown reason, she took forever to build up her characters and thrust them into the story. She could have done it in one third the time. Conversely, the hour long second act, full of tension, flies by like it was five minutes.

Lindsay Smiling, as Aldridge, gives a stellar performance as a man who does and yet does not yet understand the strong tides of racism, a performer who somehow thought people in the theater were above all of that. He was wrong. Other fine performances are by Foubert as LaPorte, Victoria Mack as actress Ellen Tree, David Andrew MacDonald as Charles Kean and Sofia Jean Gomez as Aldridge’s wife, Margaret. Good performances are also turned in by Garrett Lawson, John Little, Shannon Harris and Savannah DesOrmeaux.

As is usually the case, the Shakespeare Theater provides several pages of fine historical essays on Aldridge and slavery and its abolition in England. You can read that as a backdrop to the performance and have a much better understanding of the story. Despite its slow start, Red Velvet is fine play and nice piece of history.