Trevor Burnard, University of Melbourne and John Garrigus, University of Texas, Arlington, are the co-authors of The Plantation Machine: Atlantic Capitalism in French Saint-Domingue and British Jamaica (University of Pennsylvania Press). 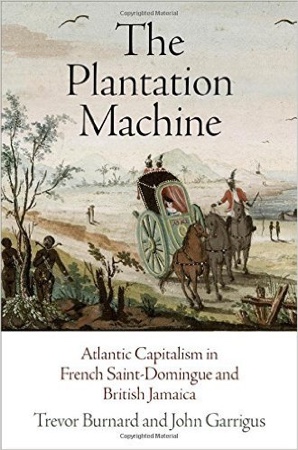 Jamaica and Haiti are today among the poorest and most troubled countries in the western hemisphere. Yet between 1748 and 1788 these places (with Haiti called by its French colonial name of Saint-Domingue) were fabulously rich and wondrous, at least for the 10 percent of the population that owned land and slaves. Those slaves and the commodities they produced gave the small population of European planters enormous influence within European imperial geopolitics. Abbé Raynal, the Enlightenment author, declared in 1770 that the labors of colonists in these “long-scorned islands” brought such profit to Europe that “they can be regarded as the principal cause of the rapid movement which stirs the universe.”

Jamaica and Saint-Domingue were also important because they were precursors of modernity – sites in which old hierarchies of birth, status and religion were replaced by devotion to pursuing the main chance. Understanding what drove white colonists in Jamaica and Saint-Domingue in these halcyon days of profit and licentious excess before the great slave revolt that led to the Haitian Revolution (1791-1804) is important in understanding the making of the modern world during the Age of Revolutions. Planters perfected the use of various forms of capital to create what we call “the plantation machine.” They especially worked on “improving” their human capital - their slaves - in ways compatible with emerging forms of capitalism.

That wealth and modernity, however, was based on a shallow foundation. Jamaica and Saint-Domingue were distinctly disturbing places. White colonists derived their money from the ruthless exploitation of African-born slaves who toiled as laborers producing tropical commodities, especially sugar, on large plantations. Planters’ treatment of enslaved people was relentlessly brutal and got worse over time as the plantation machine became more efficient. Slavery in colonial North America was dreadful but being a slave on a sugar plantation on Jamaica or Saint-Domingue was much worse. One indication of how bad slavery was for those who were enslaved is that slave populations in both colonies were never self-sustaining. Every year more slaves died than were born. White prosperity was only maintained by a vibrant Atlantic slave trade that brought ever greater numbers of Africans to the islands to replace workers killed by overwork or planter brutality. The resulting slave populations remained culturally African. As the enslaved population accounted for well over 90 percent of the total population, this constant replenishment of slave populations with freshly arrived Africans meant that the two most important colonies in the eighteenth century French and British empires in the eighteenth century were African societies even more than European outposts.

Planters in Jamaica and Saint-Domingue thus faced in acute fashion one of the major problems that bedeviled slave societies. How was a small population of whites able to maintain their safety and continue making massive profits from plantation agriculture when the slaves they relied upon for their wealth greatly outnumbered them, were culturally dissimilar, and clearly hated them? A generation of scholars of slavery have argued that not only were slave societies inherently unstable but also that planters lived in fear of what those slaves might do to them. It has become almost axiomatic that all planter actions, including the decision of southern planters to join in the American Revolution and the American Civil War, were shaped by their fear of slave insurrection. Planters were right to be fearful, especially during wartime when accustomed patterns were disturbed. We are aware that the American Revolution was pivotal in reshaping metropolitan and Caribbean relations and know very well just how cataclysmic the consequences of the French Revolution were to the survival of slavery and white power in the region.

Yet the war that did most to shape how planters in the Greater Antilles envisioned their relations with slaves was the Seven Years’ War. During this conflict, planters in Saint-Domingue had to deal with what they believed was a slave rebellion in 1758 led by a charismatic escaped slave called Macandal who was adept in combining African forms of worship with Christian iconography in ways planters found very alarming. Macandal’s rebellion was imaginary: the havoc that he was meant to have unleashed in northern Saint-Domingue was in fact due to an anthrax epidemic combined with food poisoning in which thousands of blacks and perhaps hundreds of whites died. Macandal was executed but his spirit lived on, providing a template of African understanding of religion and protest that the real rebels who started the Haitian Revolution found very useful.

White Jamaicans also noted how African-style spirituality had led to conflict in neighboring Saint-Domingue. They faced an even greater threat from Africans who took advantage of Jamaica being at war to start a serious rebellion in 1760, named Tacky’s Rebellion after one of the principal leaders. It was the greatest challenge made to the British imperial state from non-whites before the Indian Mutiny of 1857. It nearly succeeded and was put down only with the greatest difficulty. White Jamaicans’ response to the fear that rebels had imposed upon them was ferocious. They killed rebel slaves in the cruelest fashion, tempting metropolitan Britons to wonder about who were the real savages in the island; slaves seeking freedom or vicious planters of British descent. White Jamaicans cared little about what Britons, living far away, thought. They outlawed obeah (an African religion similar to the Vodou of Saint-Domingue) and began repressive legislation that established whiteness as a preeminent qualification for civil status, thus prefiguring later schemes of racial discrimination in Saint-Domingue and the antebellum American South. The lesson they learned was that if planters were always vigilant, then they could live in the tropics without fear and in safety.

What the intertwined histories of eighteenth-century Saint-Domingue and Jamaica shows is that planters believed that they would be safe as long as they could have absolute power over their slaves. That repression worked was the lessons they learned from their success in putting down Tacky and in foiling Macandal. Planters believed that their control over their slaves was absolute and that slave rebellions would always fail. Saint-Domingue planters argued that if they could act like tyrannical Jamaicans, they could keep their slaves in check. The Haitian Revolution proved that they were not as omnipotent as they believed. But before that epochal event occurred, planters had good reason to feel they were all powerful and slaves powerless.