Artists Haven’t Been This Outraged by a President Since LBJ

Robert Cohen is a Professor of Social Studies at NYU Steinhardt, and an Affiliate Professor in the History Department at NYU. 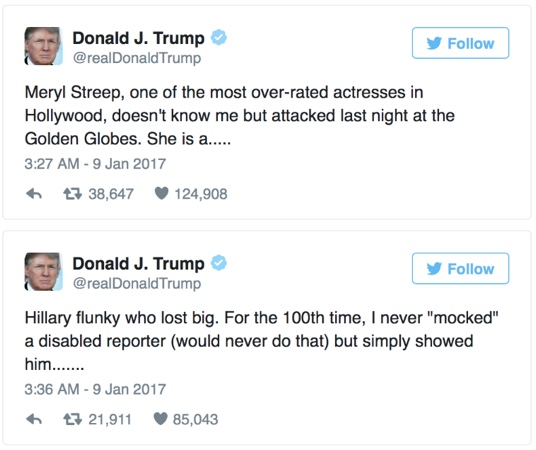 Right wing critics have been beside themselves in denouncing Academy Award winning  actress Meryl Streep and the cast of Hamilton for their dramatic public criticisms of  president-elect Donald Trump and his incoming administration. They’ve castigated these leading members of the arts community as elitists making inappropriate use of their celebrity for political purposes. But much of the arts community has ignored such criticism and stood in solidarity with Streep and Hamilton. Most recently we have seen actors George Clooney and Robert De Niro publicly endorsing Streep’s critique of Trump’s xenophobic and bigoted presidential campaign, his mockery of a disabled reporter, and his violent rhetoric. Even less famous performing artists, dancers from the Rockettes and a singer with the Mormon Tabernacle Choir have, like many prominent musicians, taken an anti-Trump stance by refusing to perform at his inauguration.

This is without a doubt the boldest and most widely supported dissident stance taken against a president by the arts community since 1965 when some of America’s most prominent poets, novelists, literary critics, sculptors, and painters embarrassed Lyndon Johnson by boycotting his White House Festival of the Arts. That boycott was motivated by opposition to Johnson’s invasion of the Dominican Republic and his unleashing of a systematic bombing campaign against North Vietnam as part of his escalation of the Vietnam War.

The boycott began when the poet Robert Lowell wrote an open letter to LBJ conveying enthusiasm for most of his “domestic legislation and intentions,” but expressing “the greatest dismay and distrust” for his “chauvinistic” and “explosive” foreign policy.” Lowell ended his letter by informing Johnson that “at this anguished, delicate, and perhaps determining moment, I feel I am serving you and our country best by not taking part in the White House Festival of the Arts.”

Lowell’s stance made the front page of the New York Times. Poet Stanley J. Kunitz and New York Review of Books editor Robert B. Silvers responded by drafting a telegram to President Johnson endorsing Lowell’s boycott and expressing “dismay at recent American foreign policy decisions.” The telegram was signed by 20 other artists and writers, including the painter Mark Rothko, cartoonist Jules Feiffer, novelists Bernard Malamud, Philip Roth, Robert Penn Warren, Mary McCarthy, and playwright Lillian Hellman. Of those invited to the White House Festival of the Arts sculptor Alexander Calder, painter Jack Levine, photographer Paul Strand and drama critic Robert S. Brustein declined to attend in solidarity with Lowell. And even at the Festival itself, the White House became the scene of antiwar criticism when John Hersey chose to read not from his novels but from his devastating account of the aftermath of nuclear bombing, Hiroshima, as a warning of the tragedy bred by war.

According to historian Eric F. Goldman, the Special Consultant to the President, who had come up with the idea for the White House Festival of the Arts, LBJ was infuriated by these protests. But LBJ at least had the good sense not to publicly chastise those boycotting his Arts Festival, a marked contrast to the tweet-happy Trump, who stooped to ad hominem attacks on Merryl Streep as an “one of the most overrated actresses in Hollywood” and on the “highly overrated” cast of Hamilton, demanding that they “should immediately apologize… for their terrible behavior.”

The  1965 boycott makes it clear that there is a tradition of artists and writers speaking out and standing up to presidents, and that the recent protests within the arts community are the latest manifestation of that tradition. But what is new here is that today’s protests have emerged much more quickly. The Festival of the Arts boycott occurred more than a year and a half into the Johnson presidency and was ignited by LBJ’s war policies. The anti-Trump protests by today’s arts community have arisen before Trump has even been inaugurated, and are a response to the extraordinary divisiveness, demagoguery, and coarseness of his presidential campaign.  It is almost impossible to imagine that Trump would ever agree, as LBJ did, to host a White House Festival of the Arts, since it would almost certainly duplicate the upcoming inaugural scene in which the best and the brightest of the arts community refuse to participate.

Given this backdrop one of the most difficult jobs in the Trump administration will be to heal this bitter split between Trump and the arts community. It is a difficulty that Goldman, who considered resigning right after the White House Festival of the Arts fiasco – which “seriously damaged” his relationship with LBJ – would well understand. Nor is it encouraging that the Academy Award winning actor who Trump selected to head the National Endowment for the Arts, Sylvester Stallone, a Republican, turned down the position. Not even Rocky would take on the fight to wed the inclusive, diverse, culturally liberal arts world to a new president widely viewed – and often tweeting – as its nemesis.