That Statue of Liberty Poem Everybody Quotes?

Ryan Poll is a professor of English at Northeastern Illinois University and the author of Main Street and Empire: The Fictional Small Town in the Age of Globalization (Rutgers, 2012). 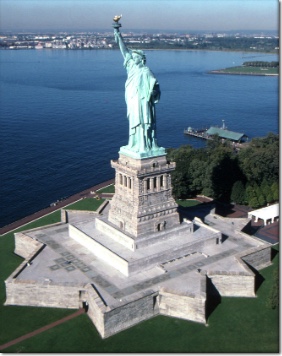 It’s about a different refugee crisis than the one we face now, but it’s every bit as relevant.

In recent days, the Statue of Liberty has been reproduced across multiple social and print media as a national symbol in opposition to the Trump administration’s aggressive ban on citizens from seven Muslim-majority nations. The lines, “Give me your tired, your poor /Your huddled masses” are repeated as an established principle of U.S. identity: that we are a nation of hospitality.

At this current political juncture, it’s informative to return to the context from which the oft-repeated lines spoken by the Statue of Liberty are abstracted: Emma Lazarus’s “The New Colossus” (1883). By returning to the late nineteenth century, we can recognize the poem as a form of political art at a time when nationalist xenophobia reigned against a different immigrant group.

The Statue of Liberty, we all learn in elementary school, was a gift from the French people to the United States in honor of the two nations’ shared values of liberty and democracy. At its unveiling on October 28, 1886, Liberty Enlightening the World was the tallest structure in New York City, standing at 305 feet. Her torch surpassed the height of the Western Union Telegraph Building (230 feet), the Brooklyn Bridge towers (282 feet), the Tribune Building (282 feet), and even the Trinity Church steeple (286 feet). The statue’s enormity was central to its design, as conceived by the French sculptor Frédéric Auguste Bartholdi (1834-1904).

Although the statue was a gift, what was not gifted was the pedestal upon which the Statue would be erected. In 1885, a year before the statue’s unveiling, Bartholdi wrote The Statue of Liberty Enlightening the World to help raise funds for the pedestal. The sculptor compared his statue to other great monuments from antiquity, including the Egyptian pyramids and “the most celebrated colossal statue of antiquity . . . the Colossus of Rhodes.” Bartholdi intended his statue to be compared to previous wonders of the world. In fact, when the Statue of Liberty was completed in 1885, Bartholdi boasted that “the famous Colossus of Rhodes . . . was but a miniature in comparison.”

Bartholdi was a brazen architect seeking to make a grand impression on human history. In contrast, Emma Lazarus (1849-1887) was an emerging political poet whose objective was not self-inflation, but rather, about addressing the need of a then contemporary refugee crisis. In order to help raise funds for the Bartholdi Pedestal Fund, Lazarus penned the sonnet “The New Colossus” for auction. Although the poem did help raise money, it was largely forgotten almost immediately afterwards. However, seventeen years after the statue’s unveiling, Lazarus’s poem was rescued from obscurity by her close friend, Georgina Schuyler, who launched a campaign to have the poem memorialized on a bronze plaque inside the statue’s base.

In the 1886 unveiling ceremony for The Statue of Liberty Enlightening the World, President Grover Cleveland officiated and proclaimed to the massive crowd gathered to witness the spectacle: “We will not forget that Liberty has made here her home . . . . Reflecting thence and joined with answering rays, a stream of light shall pierce the darkness of ignorance and man’s oppression until Liberty enlightens the world.” Seventeen years later, however, when Lazarus’s poem was added to the interior wall of the pedestal, there was neither commemoration nor speech to mark the event. In fact, not one New York newspaper even reported about the poem’s addition to this national symbol.

Although today the poem is calcified in our political imagination, Lazarus’s sonnet should be recognized as a progressive poem that radically refigures Bartholdi’s vision. In contrast to Bartholdi’s boastful declaration that his colossal statue was the greatest of all time, Lazarus begins her poem with a negation: “Not like the brazen giant of Greek fame,/With conquering limbs astride from land to land” (my emphasis). Whereas Bartholdi positioned his statue as quantitatively greater than its ancient predecessors, Lazarus’s poem removes the statue from this competitive context and instead, refigures the statue into something qualitatively different. In Lazarus’s refiguration, the statue becomes a monument to a new ideal: hospitality.

Rather than Bartholdi’s vision that his statue represents “liberty,” Lazarus’s poem reworks the statue’s meaning. Not only does Lazarus refuse to use the word “liberty” in her poem, but what is more, Lazarus even refuses to use the name bestowed by Bartholdi, “The Statue of Liberty Enlightening the World.” Instead, Lazarus gives the statue a new name and a new meaning: “Mother of Exiles.” In Lazarus’s reworking, the statue embodies the principle of hospitality that welcomes all dispossessed, displaced people from all over the world: “From her beacon-hand/Glows world-wide welcome.” This is the power of poetry—the ability to refigure, to re-trope, to change the way we see and feel.Over the course of the twentieth century, this poem, especially the last four lines, have become close to a national sacred text: We are a nation defined by our commitment to hospitality.

In her poem, Lazarus brilliantly makes the statue into an active presence, rather than an inert symbol. The “Mother of Exiles” actively intervenes on behalf of the oppressed. She breaks out of its architectural fixity and demands: “Give me your tired, your poor,/Your huddled masses . . . The wretched refuse of your teeming shores . . . .” The statue specifically addresses Europe, informing the continent that she willingly accepts all people who Europe deems to be garbage (“wretched refuse”). In contrast to Europe’s reified social hierarchy, the Mother of Exiles welcomes and embraces all refugees into the ever-expanding project of U.S. democracy, which is simultaneously a project of diversity.

Although Lazarus uses an abstract, non-descript language to describe refugees, the poem’s material context was a specific refugee crisis. On March 13, 1881, Czar Alexander II was assassinated by the Nihilists. When Czar Alexander III assumed the throne, he immediately blamed the Jews for the assassination of his father and six weeks later, horrific pogroms throughout Russia and Eastern Europe erupted, causing thousands of Jews to flee to Western Europe and America. The Times of London reported: “these persecutions . . . these oppressions, these cruelties, these outrages have taken every form of atrocity in the experience of mankind, or which the resources of the human tongue can describe. Men have been cruelly murdered, woman brutally outraged, children dashed to pieces or burnt alive in their homes.”

Omer-Sherman writes that “when the first human cargo of Jewish migration from Russia arrived in New York in August of 1881, Lazarus was there to witness the grotesquely visible, nonassimilated products of the Galut.” Lazarus responded with hospitality, care, and assistance. But many Americans assumed a different attitude: one of active hostility. “Native” Americans vehemently protested against these new immigrants because they were an ostensible “threat” to the nation’s security and sanitation.

Throughout New York, anti-Semitic outbursts reigned against the wave of Jewish immigrants. Zeniade Ragozin, for example, writing in the widely popular magazine Century, claimed that Jews are to blame for the pogroms against them. Ragozin repeats well-established, anti-Semitic tropes, calling Jewish people “loathsome parasites” who live together in “unutterable filth and squalor.” Ragozin calls Jews a threat to national health and security, labeling them a “dangerous element” able to spread “all kinds of horrible and dangerous contagions.”

In response to this burgeoning anti-Semitism and protests against Jewish refugees, Lazarus left her genteel world and began aiding the Jewish immigrants both through her writings and her actions. According to Josephine Lazarus, Emma’s sister, the strong public protests against the Jews were a “trumpet call that awoke the slumbering” poet into political action.

In an 1882 letter written to her close friend, Rose Hawthorne Lathrop (Nathaniel Hawthorne’s daughter), Emma Lazarus wrote: “The Jewish Question which I plunged into so wrecklessly & impulsively last Spring has gradually absorbed more & more of my mind & heart—It opens up such enormous vistas in the Past and Future, & is so palpitatingly alive at the moment—being treated with more or less ability & eloquence in almost every newspaper & periodical you pick up—that it has driven out of my thought all other subjects.”

This letter, penned a year before “The New Colossus,” reads like an act of conversion. And this is how Josephine Lazarus preserved her sister’s memory in an anonymous eulogy for Century magazine (1888), a year after Emma’s death. Josephine said that her sister found her identity in 1882 when she witnessed the desperate plight of Jewish refugees. This encounter transformed Emma into an ardent activist who engaged poet.

Lazarus gave us a national ideal. Yet this ideal is frequently undermined and threatened by U.S. history. In fact, in 1882, while the Statue of Liberty was being built, the first federal immigration law was enacted which prohibited a specific ethnic group from entering and becoming citizens: The Chinese Exclusion Act.

Our ideals are marred by our history, but without our guiding ideals, what are we? And without ideals, what visions will guide us into the future?

Bell, James B. and Richard I. Abrams. In Search of Liberty: The Story of the

Kotler, Neil G. “The Statue of Liberty as Idea, Symbol, and Historical Presence.”

Pauli, Hertha and E.b. Ashton. I Lift My Lamp: The Way of a Symbol. Port