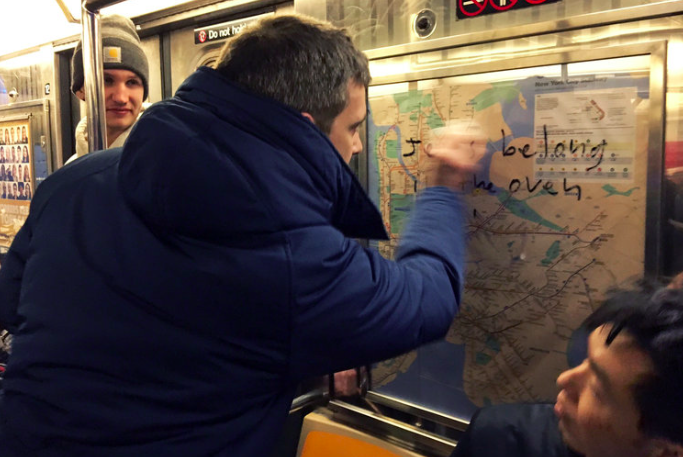 The car’s windows and posters were covered in anti-Semitic graffiti. Messages like “Jews belong in the oven” and “destroy Israel, Heil Hitler,” had been written over subway maps, as shown by photographs taken on the train. Swastikas were drawn in black marker on the doors and windows.

Mr. Nied and several other commuters began to wipe away the graffiti, their actions captured in photographs taken by Mr. Locke, who wrote on Facebook about his experience. By late Sunday afternoon, more than 518,000 people had reacted to the post on Facebook, and the post had been shared more than 354,000 times.

“I’ve never seen so many people simultaneously reach into their bags and pockets looking for tissues and Purell,” Mr. Locke wrote. “Within about two minutes, all the Nazi symbolism was gone.”

Mr. Nied said that the episode had lasted less than five minutes and that the passengers were able to erase the graffiti before the train reached 96th Street. He returned a bottle of hand sanitizer to one of the riders, apologizing for having used most of it.