Sandra Weber writes about woman’s history and the Adirondack region, and lives just a few miles from the grave of Inez Milholland in Lewis, New York. Weber’s latest book is The Woman Suffrage Statue: A History of Adelaide Johnson’s Portrait Monument to Lucretia Mott, Elizabeth Cady Stanton and Susan B. Anthony at the United States Capitol (McFarland & Company, Inc., 2016).

During the recent presidential campaign, I heard rumors of a supposed feminist conspiracy. Online posts claimed it was not a coincidence that a woman ran for president just as the centennial of suffrage approached. Feminists wanted to flaunt their power, so women were going to vote for Hillary Clinton solely to elect a woman president. According to the chatter, she would win the election, not because of qualifications or experience, not because of her opponent’s contemptuous statements, but simply because of her gender. 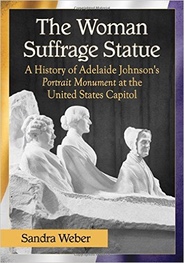 One male blogger went so far as to claim that Hillary Clinton was merely “a substitute” candidate for her husband. She was not being nominated and elected based on her credentials; she was “Plan B.” Whether that was an intentional coded phrase or not, it certainly was heinous.

But Clinton didn’t win. There was no feminist conspiracy. The majority of white women did not vote for the woman presidential candidate.

This a good sounding line to pull out and cast into cyberspace. However, whether the assertion comes from the left or the right, it is wrong. Women have not voted, nor should they vote, for women based solely on gender.

Even before women had the vote, it was suggested they would vote as a bloc to enact legislation. The liquor industry feared women’s vote so much that they campaigned relentlessly against suffrage. Yet, other anti-suffragists said just the opposite; they claimed women would vote the same as men, so what was the point of women having the vote?

One group of antis declared that feminism sought to allow women to “deny their God-given task.” It was characterized as a woman’s desire to “shake off the shackles of convention” that had hampered her spiritual and intellectual growth—and the “freedom of her lower limbs.” And it was believed feminists had a deep-seated desire to control man by supreme domination: “Petticoat Government.”

Obviously, the idea of women having any political power provoked great fear in some men. Of course, some women wanted no part of feminism or suffrage, and even among supporters there was disagreement about ideology, strategy, and other issues. “Individual women … have a right to divide on all questions,” said suffrage leader Carrie Chapman Catt. “The very bone of our contention for woman suffrage is the right of expression of individual conviction.”

Women in the Western states who had suffrage voiced their autonomy in the 1916 presidential election. When asked by their sisters in the East to cast protest votes against Woodrow Wilson because he refused to support federal suffrage, the majority of women voters did not yield to the appeal. Myth busted?

By the 1920 election, the 19th Amendment had been ratified and the myth resurrected itself. Reporter Mildred Morris noted that if less than one-half of the 26,883,566 women voted as a unit, they could control the political destiny of the nation. “They will decide what part they will play in the nation’s affairs and whether a new era has begun—an era of petticoat political power.”

Women did not vote in great masses in 1920, nor did they vote as a bloc any more than men voted as a bloc. The suffrage amendment resulted in neither governmental chaos nor an era of feminine political supremacy.

Yet, almost a century later, the notion that women vote for women still exists. Sometimes, political parties put female candidates on a party ticket solely to bring women’s votes. It is insulting and demoralizing because it implies women are mindless robots who vote without serious thought to a candidate’s credentials and principles. Perhaps some men vote for men based on gender, but their sexism does not justify a reciprocal response.

In 2018 and 2020, we will need qualified candidates to run for public office. In large numbers, women have demonstrated their willingness to vote for men for 10 decades. Please, men, demonstrate that large numbers of you are willing to support qualified women candidates. Don’t be swayed by propaganda and puppet candidates, men or women. Be a critical thinker, strip away the labels, and examine the naked facts for yourself.