Did the Muslim World Really Fall for Hitler?

John Broich is an associate professor of history at Case Western Reserve University and the author of London: Water and the Making of the Modern Cityand the forthcoming Squadron: Ending the African Slave Trade. 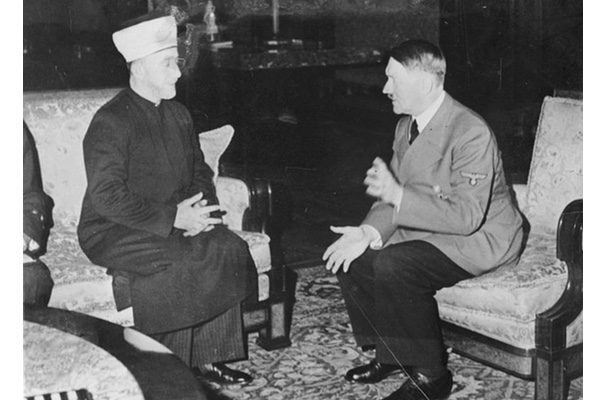 This photo has had an extraordinary life for an archival document. It remains a fixture on anti-Muslim websites, and an anti-Muslim group paid to have it plastered on buses in several U.S. cities in 2014. Recently, the man on the left—Amin al-Husseini (1895-1974)—made headlines when the prime minister of Israel falsely credited him with giving Hitler the idea for the Final Solution—a suggestion for which the prime minister was roundly rebuked by genuine scholars from around the world, including Israel.

But the photo certainly seems to suggest a connection between al-Husseini and Hitler. Is this where the notion of “Islamofascism”—still a popular term with some Western commentators—originated?

Born into a prominent Jerusalem family during the period of Ottoman rule, al-Husseini later worked to oust the Ottomans as a recruiter for the British and for anti-Ottoman Arab rebels during the First World War. After the Ottoman Empire was dissolved, al-Husseini joined the movement for a self-governing Arab federation of nations in the Middle East. There was reason to hope: The British had promised Arab independence after the war in exchange for their help. When, in 1920, Arab leaders declared an independent kingdom centered on what is today Syria and Lebanon, a jubilant al-Husseini rushed to join them in Damascus. But the French had always planned on keeping Syria and Lebanon for themselves after the war, and bombed the upstart kingdom to dust.

Al-Husseini then returned to Palestine to work toward self-rule there. But the British, too, meant to keep the region for themselves after the war, arranging for the League of Nations to grant them a “mandate” in Palestine. (This was a euphemistic term for a colony, meant to connote a humanitarian objective.) The British also wanted to support the creation of a “national home”—a phrase they strategically left undefined—for Jewish people in the region.

Al-Husseini then led one of several Palestinian nationalist parties, beginning as a moderate nationalist who sometimes worked with the British to ease tensions between Arabs and Jewish settlers. (At other times, the British suspected him of fanning the flames of Arab-Jewish tension and rioting.) Mandate officials granted him a position in charge of Muslim religious courts and education throughout Palestine, after which point he had the title “Mufti.” ...