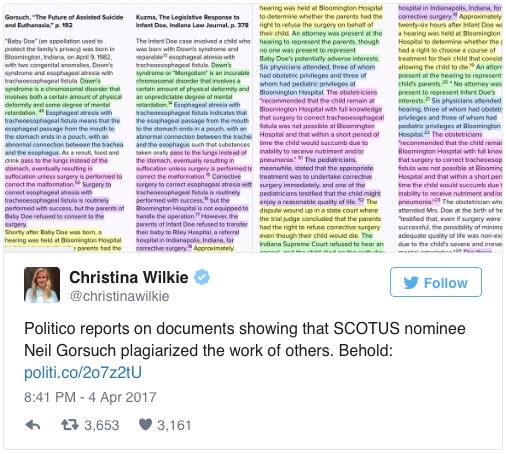 ●  Here's What Academics Are Saying About Neil Gorsuch's Alleged Plagiarism

●  Gorsuch's Plagiarism Is Worthy of Embarrassment By Noah Feldman

Republicans have painted Supreme Court nominee Neil Gorsuch as a man whose character and legal scholarship are unimpeachable, but on Tuesday night he became the latest Trump pick to be accused of plagiarism.

Politico and BuzzFeed reported that in several sections of Gorsuch’s 2006 book The Future of Assisted Suicide and Euthanasia, and in an article on the same subject published in the Harvard Journal of Law and Public Policy in 2000, he repeats the facts, words, and structures of other sources without citing them.

The most egregious example is a summary in Gorsuch’s book of a 1982 case involving a baby with Down syndrome. Gorsuch repeats about 11 sentences from an Indiana Law Journal article by Abigail Lawlis Kuzma, omitting and altering only a few words and sentences. Rather than giving Kuzma attribution, Gorsuch cites the same sources that she relied on.