The bombing was for domestic consumption. According to The New York Times, “The Pentagon informed Russian military officials, through its established deconfliction channel, of the strike before the launching of the missiles, the official said, with American officials knowing when they did that Russian authorities may well have alerted the Assad regime.” In other words, the object of Trump’s Tomahawks was not Syria’s capacity to deploy gas, but domestic liberal opponents who base their resistance to Trump entirely on the premise that he is anti-American because he is too close to Putin, and that he is a traitor to a bipartisan policy of humanitarian military interventionism. He bombs, drones, and kills, but he doesn’t do it, as his predecessors did, in the name of humanity. Until yesterday.

Laurence A. Tisch Professor of History at Harvard University

When a president finds his approval rating in the doldrums and Congress slow to enact his domestic agenda, he naturally turns to foreign policy in search of quick wins. That, at any rate, is the cynical interpretation of President Donald Trump’s decision to launch 59 Tomahawk missiles against a Syrian airfield in Homs, in retaliation for Bashar al-Assad’s use of chemical weapons in an attack that killed more than 80 civilians.

My view of Trump’s action is more positive. It is not that I think one salvo of missiles is going to end the civil war in Syria. Of course it won’t. But I think we can now discern the beginning of the improvement in US foreign policy we have been waiting for ....

Daniel Pipes No to bombing Syria

President of the Middle East Forum

The Obama Administration rightly stayed out of Syria through six painful, grisly years of civil war there. Yes, the fighting has cost hundreds of thousands of lives and displaced millions. Yes, the uncontrolled migration of Syrians to Europe caused deep problems there. Yes, the Kurds are sympathetic. Yes, Barack Obama made a fool of himself when he declared the Assad regime's use of chemical weapons a "red line" and proceeded not to enforce it.

Despite all this, it was right not to intervene because Iranian- and Russian-backed Shi'ite pro-government jihadis are best kept busy fighting Saudi-, Qatar-, and Turkish-backed anti-government Sunni jihadis; because Kurds, however appealing, are not contenders for control of the whole of Syria; and because Americans have no stomach for another Middle Eastern war....

Trump should immediately cease all direct attacks on the Syrian regime and instead help its enemies to fight it more effectively.

Eliot A. Cohen Does Trump Know What to Do After Striking Syria?

The airstrike was the right thing to do. But as with most uses of force, it seems like an answer bound to breed more questions. This was not a painful blow to the Assad regime. Having tipped off the Russians, and targeting things rather than people, it did not do much damage to anything the Assad regime cares about. By using cruise missiles rather than manned aircraft, the United States tacitly admitted that it is deterred, to some degree, by the Russian air defenses installed in Syria. If maximum military effect were desired, air-delivered ordnance is an order of magnitude cheaper and usually more destructive. But aircraft are vulnerable to surface-to-air missiles in a way Tomahawk missiles are not.

Moreover, this was a one-time punch at a single target. A truly punishing attack would involve multiple targets, and perhaps repeated blows. An effective, destructive attack—that is, one that would worry the Assad regime—would have killed skilled personnel, military and political leaders, and elite fighters. This strike was, instead, appropriate in the narrowest and weakest sense: It went after the base (apparently) from which the nerve-agent-carrying planes that attacked Khan Sheikhoun flew. Blowing up some installations is not, in fact, “proportionate” to the massacre of children. A warning this was; the avenging sword of justice this was not. Conceivably, the Syrian government may calculate that worse will follow from a repeat offense. Just as conceivably, they and their Russian and Iranian allies may conclude that this president, like some of his predecessors, mistakes the theater of war for the real thing. They do not. 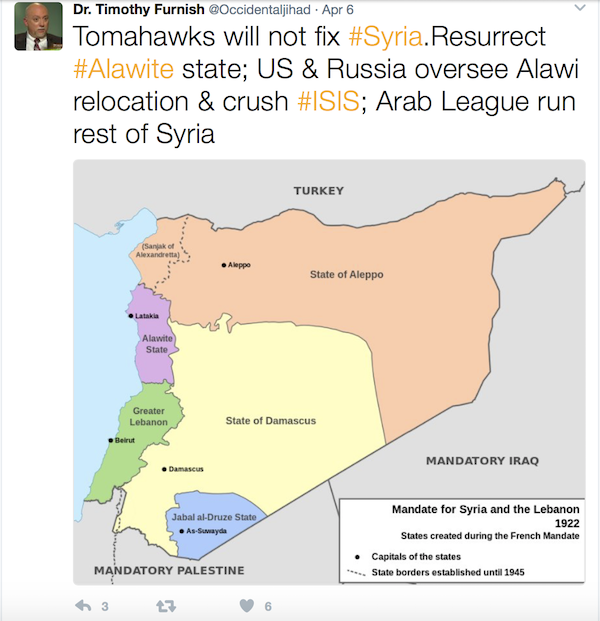 Professor emeritus of history and international relations at Boston University

Let’s be clear: Syria’s Bashar Assad is a bum and probably a war criminal. Yet it does not follow that the president of the United States possesses the authority to order an armed attack on the sovereign state that Assad governs.

That authority rests with the Congress, as Article I, Section 8 of the Constitution explicitly states. As a result of President Trump’s actions, that provision has now become a dead letter. The last constraints inhibiting the use of force by whoever happens to be commander-in-chief have now disappeared. When it comes to initiating hostilities, the occupant of the Oval Office is now omnipotent.

Senior fellow at the Council on Foreign Relations

One of the worst things that Barack Obama did while in office was to announce a “red line” over the Syrian government’s use of chemical weapons and then, in 2013, refuse to enforce it. His failure to act gave Bashar Assad license to commit further atrocities, including the use of chemical weapons, as he did again this Tuesday. It also sent to the entire world a crippling message of American irresolution. Obama’s lack of credibility was obvious to predatory states such as Russia, China, Iran, and North Korea, and encouraged them to conduct further violations of international norms. It may not be entirely a coincidence that Vladimir Putin invaded Ukraine a year later; at the very least the U.S. failure in Syria must have reassured Putin that Obama would do little to stop him.

It is therefore of considerable importance that President Trump has now attacked a Syrian air base with 59 cruise missiles in retaliation for Assad’s use of chemical weapons. This is a small but significant step in regaining lost American credibility and putting America’s adversaries on notice. There is a new sheriff in town, and he will be far less hesitant than Obama was about the use of force.

Among other things, the strike signals to Vladimir Putin that, despite the undoubted help his intelligence services provided to Trump’s campaign by hacking Democratic emails, he cannot count on Trump to act in Russia’s interests, which in this case lie with supporting the Assad regime.

Juan Cole What Is It With US Presidents and Tomahawk Cruise-Missile Strikes?

Professor of history at the University of Michigan

President Donald Trump’s impulsive Tomahawk-missile strikes on the tiny Shayrat Syrian Arab Air Force base in Syria is not the first high-profile use of this weapon by a modern president. A review of past such strikes suggests that they are typically deployed symbolically by presidents in trouble at home, and that they have no significant military implications.

President Barack Obama began his air assault on the so-called Islamic State (ISIS, or ISIL) group in eastern Syria in 2014 with 47 Tomahawk missiles. This massive assault, which continued for the subsequent two and a half years with regular bombings by fighter jets, did nothing in and of itself to set back the terrorist organization. In 2016 alone, Obama dropped over 12,000 bombs on Syria. Obama had received substantial criticism after ISIL took over much of eastern Syria and northern and western Iraq for its so-called “caliphate” in spring-summer 2014. Despite US assertions that it has visited substantial attrition on ISIL commanders, these individuals appear to have been easily replaced, and ISIL retains substantial territory in Raqqa and Deir al-Zor provinces. That is, the aerial strikes have had no significant effect, inasmuch as, for the most part, they have not been in support of a ground force capable of taking substantial territory.

President George W. Bush began his war on Iraq with a cruise missile “decapitation” strike against Saddam Hussein on March 20, 2003. This strike, which killed innocent civilians in Baghdad, was based on faulty intelligence, and Saddam appeared on television later that day. Human Rights Watch estimated that of 40 aerial strikes on Iraqi leaders, none of them succeeded, but they killed 42 innocent noncombatants and wounded dozens more....

Trump’s strike on the relatively insignificant Shayrat base was conducted in such a way as to ensure that Syrian president Bashar al-Assad almost certainly had time to instruct his some 30-odd Sukhoi Su-22 aircraft to flee. The Syrian Arab Air Force probably has about 300 fixed-wing aircraft left, but not all of them are operational. These planes have been deployed extensively against rebel forces based in civilian urban neighborhoods such as eastern Aleppo, but in the nature of the case, barrel bombs and “dumb” munitions dumped on cities produce high civilian casualties.