Ronald L. Feinman is the author of Assassinations, Threats, and the American Presidency: From Andrew Jackson to Barack Obama (Rowman Littlefield Publishers, August 2015). A paperback edition came out in March 2017. 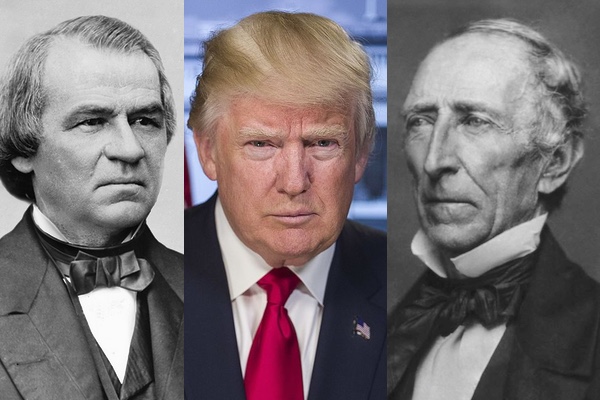 America has had two Presidents “without a party” – the 10th President, John Tyler (April 4, 1841 to March 4, 1845), and the 17th President, Andrew Johnson (April 15, 1865 to March 4, 1869). Both had never-ending battles with Congress, as both were from the opposition party, but had run on a “fusion” ticket in the Presidential campaign, and then suddenly after 31 days and 45 days in the Vice Presidency, respectively, became President. The question is whether Donald Trump, who ran as an outsider against the party system, but overcame all of his 16 Republican opponents in the primaries and caucuses of 2016, is the third such President.

John Tyler was a states rights Democrat, who agreed to run for Vice President on the Whig Party ticket of 1840, with former General William Henry Harrison, the hero of the Battle of Tippecanoe in the War of 1812. Suddenly, within one month of taking the oath, Harrison was dead of pneumonia, and Tyler had become the first Vice President to succeed to the Presidency due to the death of the incumbent.

The Whig Party leadership, headed by Senator Henry Clay of Kentucky and Congressman John Quincy Adams of Massachusetts, declared war on Tyler, asserting that he was not President, but simply “Acting President,” who could be controlled by the Whig Party in Congress as to personnel and policies. But Tyler asserted that he was President, as if he had been elected to the office. It became common for Tyler to be referred to as “His Accidency” by Clay and other Whigs, who refused ever to see Tyler as a legitimate President, and with Clay planning ahead to run for the Whig Party presidential nomination in 1844. The lack of respect and deference was apparent within months, as the entire Whig cabinet, after initially being kept on in their positions by Tyler, all resigned on September 11, 1841, with the exception of Secretary of State Daniel Webster, who agreed to remain to finalize the Webster-Ashburton Treaty with Great Britain over the Canadian boundary, and also to show independence from Clay, his Whig rival for party leadership. Two days after the cabinet members had resigned, the Whig leadership expelled Tyler from the party. Tyler now suffered constant attacks by Whig Party newspapers, and many threats of assassination were aimed at the President, who was regarded as a “renegade” for having the gall to act independently of the party that made him Vice President.

Tyler would discover that the Whig Congress was unwilling to provide funds to fix the White House, which had fallen into disrepair. Four of his cabinet appointments were rejected by the Senate as were four Supreme Court nominees. Tyler, in turn, refused to cooperate with the Whig plan to re-establish the National Bank or raise the protective tariff, traditional Whig policies. After he vetoed Whig bills, the Whigs attempted to impeach him in the House of Representatives. They failed due to loss of the House to the Democrats in the midterm elections in 1842.

The Texas Treaty that the Tyler Administration negotiated was rejected by the Whig controlled Senate in June 1844, but after the victory of Democrat James K. Polk in the Presidential Election that fall, it was arranged that Texas would be added to the union by joint resolution, becoming the one major accomplishment of the Tyler Presidency, but it was done without the cooperation of his party. So Tyler became the first President to be unable to gain the backing of his party on any issue throughout his tenure.

A generation later Andrew Johnson shared much the same experience. His Vice Presidency had begun inauspiciously. He appeared to be drunk on Inauguration Day in 1865 when he gave a long, rambling speech embarrassing President Abraham Lincoln and the Republican Party, which had named him, despite being a Democrat, as Lincoln’s running mate in 1864. Lincoln, concerned about the danger of losing the election to former General George McClellan, who had been fired by Lincoln for disastrous leadership during the Civil War, ran on the National Union party line. Johnson had been loyal to the Union, despite being from the South, and had been an effective Military Governor of his home state, Tennessee, after a long political career as a Democrat, and replaced Vice President Hannibal Hamlin on the Presidential ticket.

But when Lincoln was assassinated, Johnson made clear that he did not agree with the Republican Party opposition to Lincoln’s Ten Percent Plan on Reconstruction of the Southern states, and decided to give amnesty to former Southern Confederate leaders. He also chose to allow the Southern states back into the Union. He asserted his authority during the seven and a half months that Congress was out of session. When Congress returned in December 1865 the Radical Republican leaders, led by Congressman Thaddeus Stevens of Pennsylvania, Senators Charles Sumner of Massachusetts and Benjamin Wade of Ohio, promoted an investigation of the violation of the rights of freed African Americans and the widespread violence by the Ku Klux Klan and other groups in the reconstructed South.

This led to open confrontation from early 1866 to the end of the Johnson Presidency. Johnson used his veto power to prevent the extension of the Freedmen’s Bureau, but otherwise was neutered. The Freedman’s Bureau was passed on the second round in 1866, followed by the enactment of the Civil Rights Act of 1866 over his veto. He opposed the proposed 14th Amendment. Johnson then went out on the campaign trail, as no President had ever done before, and campaigned for the defeat of his Radical Republican opponents, failing miserably in that attempt, and sadly undermining his own stature by the use of foul language in many of his campaign speeches. The result was a more recalcitrant Congress, and the passage of laws to limit the powers of the presidency. One law diminished the president’s authority over the military while another, the Tenure Of Office Act, denied the President’s right to remove Cabinet officers once they had been confirmed by the Senate, in violation of a tradition since George Washington’s day.

Ultimately, Andrew Johnson was brought up on impeachment charges. The case against him was weak. Seven courageous Republican Senators refused to convict him, and he was saved by one vote short of the two-thirds needed for conviction. Johnson was treated with a final indignity, when his attempt to fill a Supreme Court vacancy was prevented by Congress, which passed a law reducing the membership of the Court from 10 justices to 9. So as under Tyler, Johnson suffered constant rebukes and had a continuously contentious Presidency, which was further undermined by his own confrontational and extremely aggressive public behavior.

And now we have President Donald Trump, who in his first three months in office, has shown evidence that he is willing to ignore party labels, after his successful defeat of all of his opponents in the Republican Party in 2016, and his constantly changing viewpoints on domestic and foreign policy issues. Trump has clashed with many members of the Republican Party, and has hinted at trying to work with Democrats on health care, after his disillusionment with Speaker of the House Paul Ryan over the failed attempt to end Barack Obama’s Affordable Care Act, and his denunciation of the Freedom Caucus in the House of Representatives. Republicans in the Senate, including John McCain of Arizona, Lindsey Graham of South Carolina, Ben Sasse of Nebraska, and many others have also clashed with Trump over the investigation of the influence of Russia in the 2016 election, and Trump’s reckless, unstable, unpredictable behavior, including his incessant use of Twitter.

Trump’s confrontational and extremely aggressive public behavior, quite similar to that of Andrew Johnson in office, has not helped his ability to get things done or promote unity, and his public opinion rating is the lowest of any new Presidency in the era of modern public opinion polls. There are investigations going on in the House and Senate, and many Republicans and conservatives have leveled strong criticisms of Trump on a multitude of issues. Democrats have roundly denounced him at every turn. The result is that the only significant accomplishment of Trump in his first Hundred Days is the confirmation of Neil Gorsuch to the Supreme Court.

The possibility of impeachment is still lurking. Investigations continue by Congress and the Federal Bureau of Investigation, the Central Intelligence Agency, and other intelligence agencies, including foreign intelligence services. The reality of potential prosecution is very real, but just as in the Watergate Scandal under President Richard Nixon, it will take time for the investigations to finish their work.

In any case, it can be said already that Donald Trump is the first President truly without a party since the eras of John Tyler and Andrew Johnson. He has shown little loyalty to his party and his party has returned the favor. This is in part owing to his own character flaws and to the fact that he has zero government experience. Unlike Tyler and Johnson, Trump was elected to the presidency, but that was only owing to the Electoral College. He lost in the popular vote by 2.85 million votes to Hillary Clinton. We are in very combative times, as occurred under John Tyler and Andrew Johnson, and how it will all work out is a question that we cannot answer at this time. Certainly, the next chapters of the Donald Trump Presidency will be fascinating to observe and deserve every American’s full attention.