Congress Has the Power to Disclose Trump’s Tax Returns

George K. Yin is the Edwin S. Cohen Distinguished Professor of Law and Taxation at the University of Virginia and a former Chief of Staff of the Joint Committee on Taxation. 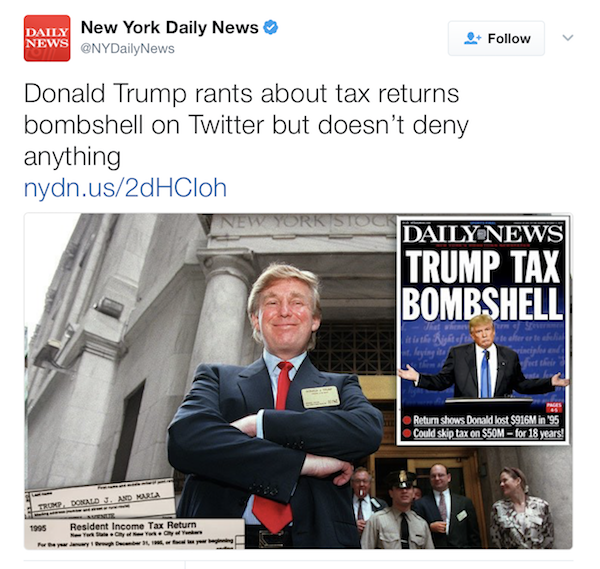 Throughout the extremely disturbing first few months of the Trump administration when the President’s views — most recently with respect to FBI Director James Comey — appear to turn on a dime, one important constant has been his refusal to release his tax returns. (His latest promise is to release his returns after he leaves office!) To cut short what seems to be the nation’s inevitable slide into constitutional crisis, Congress should obtain and possibly disclose those returns under authority of a law first passed in 1924. The action requires support from a few Republicans in either the House or Senate, but they must recognize the risk the President presents to the country and that their hopes for major legislative and foreign policy successes continue to dwindle the longer he remains in office.

The 1924 law was adopted for reasons eerily similar to our current situation. Prior to 1924, the nation had hotly debated the proper balance between the privacy interests of taxpayers and the public’s right to know. The first income tax laws of the country, passed during the Civil War, permitted full publicity of tax information. This practice was reversed in 1870, thanks to leadership from Congressman (and future President) James Garfield (R-Ohio), to respect the countervailing privacy interests of taxpayers. The issue again arose during the short-lived income tax of 1894 and the 1909 tax imposed on corporate income. Eventually, Congress settled on a general rule of confidentiality of the information with the president having sole authority to determine whether any tax returns might be disclosed.

Throughout the early years of the modern income tax, the Progressives urged a return to full publicity to help prevent fraud by taxpayers. They argued that public monitoring of tax submissions would encourage taxpayers to be more honest. But others decried that notion. The New York Times editorialized ominously against the “malicious tittle-tattle” emanating from income tax publicity, which might “convert the whole community into a horde of spies or detectives.”

Although full publicity has never been revived, Congress loosened the law in 1924 in part to address a separation-of-powers concern. Representative John Nance Garner (D-Texas), ranking member of the House Ways and Means Committee, explained to the House that though the president could obtain and disclose anyone’s return, Congress could not. He demanded the same right for his co-equal branch of government and Congress concurred.

Several matters brought the problem to Congress’s attention. During that period, Congress was investigating the “Teapot Dome” scandal, the alleged bribery of government officials in exchange for the leasing of public oil fields to private interests. As part of its investigation, Congress sought from President Calvin Coolidge the tax returns of the alleged principals involved in the scandal, but the president initially resisted the request. Although Coolidge ultimately acceded to it, the experience undoubtedly made Congress aware of its need to be able to obtain tax information independent of the president’s permission.

Another matter related to possible conflicts involving Treasury Secretary Andrew Mellon, who continued to own many business interests while he served in government. Some in Congress wanted to obtain Mellon’s tax information to learn how his interests would be affected by tax legislation then being urged by the Treasury Department.

Finally, the Senate had begun in early 1924 an investigation of the Bureau of Internal Revenue (predecessor to today’s IRS), and its initial inquiries had been stymied by the inability of the investigating committee to examine tax returns. Among other things, some members of Congress wanted to determine if the Bureau had given especially favorable treatment to Mellon and his companies.

The legislation approved in 1924 gave each of two tax committees — the House Ways & Means and Senate Finance Committees — the unqualified right to request any tax returns from the Secretary of the Treasury and directed the Secretary to comply with that request. The unqualified right matched the unrestricted access of the president and executive branch to the information. With slight changes in language (and extension of the same authority to the Joint Committee in Taxation when it was created in 1926), the law remains the same today. Congress’s right to obtain tax information is subject to the implicit condition applicable to any Congressional inquiry that there must be a legitimate legislative purpose.

The 1924 law also authorized the tax committees to submit tax information to the House or Senate, effectively making it public. The disclosure right is subject to the same implicit condition that there must be a legitimate legislative purpose.

The extraordinary congressional authority has rarely been invoked. One important occasion was in 1974 when the staff of the Joint Committee on Taxation completed an investigation of President Nixon’s taxes. Because of the great public interest in the investigation, the committee on a bipartisan basis exercised its authority and released to the public the staff report containing Nixon’s tax information.

Following Watergate and its discovery of abuses by Nixon, Congress significantly limited the president’s access to tax information and barred him from making any disclosure. But it did not change the authority of its tax committees. The recent experience involving President Nixon’s taxes had demonstrated the importance of preserving a right to make public disclosures.

Investigation of President Trump’s returns would serve several purposes. First, his business returns might provide useful clues regarding possible conflicts, such as his connections with foreign nations. Recent statements from his tax lawyers that the President had no income from Russian sources or debt owed to Russian lenders may not be meaningful since transactions may be structured using intermediaries organized in different countries.

Second, the returns also would clearly show how he and his businesses would be affected by tax plans recently announced by his administration. A leak of two pages from his 2005 tax return revealed that over 85 percent of his liability in that year was due to the alternative minimum tax, a measure he has now proposed to repeal. Will his tax proposals cut his taxes by 85 percent or more? As noted, the 1924 law arose in part due to concerns about conflicts.

Third, the President has stated repeatedly that his returns are under audit by the IRS. Congress should investigate to ensure that the tax agency (on its own or under pressure from higher-ups) does not grant him special favors, another 1924 concern. This worry is not an idle one; an initial IRS audit of Nixon’s returns failed to assert any proposed adjustment even though the Joint Committee staff subsequently found (and the IRS concurred on second audit) that Nixon actually owed an additional $500,000.

Finally, the public has a right to know about the President’s taxes simply because he is now the taxpayer-in-chief whose behavior should be a model for the country. Is there a reason why our normally swaggering President is so reticent on just this one matter? If Congress discovers that there is nothing unusual about his taxes, that conclusion might help to restore the public’s trust in him and his administration.

During the last 40 years, presidents of both parties have voluntarily released their tax information to the public. Because President Trump has refused to do so, Congress through its tax committees should obtain the information and make appropriate disclosures in order to affirm the public’s right to know.