Suzy Evans is an attorney, author, and literary agent who holds a Ph.D. in history from UC Berkeley. Her books include "Machiavelli for Moms" (Simon & Schuster) and "Forgotten Crimes: the Holocaust and People with Disabilities." Find Suzy on Twitter  @thehistorychef and at suzy@dijsktraagency.com 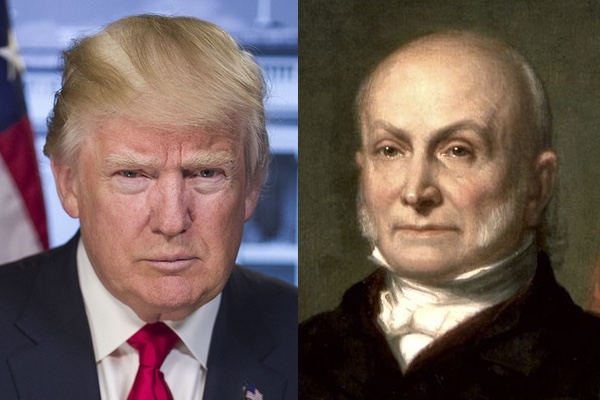 When John Quincy Adams took the Oath of Office in 1825, it was under a cloud of controversy. The election of 1824 had been a bitter four-man race between Andrew Jackson, Henry Clay, William Crawford and Adams.

Since no candidate won a majority of electoral votes, the election was thrown into the House of Representatives, where Clay, as Speaker of the House, threw his support to Adams, even though Jackson had won the most popular and electoral votes.

Adams then quickly appointed Clay as Secretary of State. Outraged and feeling cheated out of the White House, Jackson and his supporters called the deal a “Corrupt Bargain” designed to cheat the will of the people. “There was cheating and corruption,” stormed the Jacksonians, “and bribery, too.”

With these accusations hanging over his head, President Adams faced problems from the start. Aware of the fact that “two-thirds of the whole people” didn't want him to be president, he promised in his Inaugural Address to make up for his lack of support with “a heart devoted to the welfare of our country.”

But his four years in office weren’t easy ones. Although his background and experience could have made him a great president, he lacked the charisma needed to create a base of loyal supporters and he went into the election of 1828 fearing the worst. Challenged again by Jackson, the campaign was a bitter rematch with personal attacks in the press reaching a level of cruelty and incivility rarely equalled (until the Age of Trump) in American politics.

In campaign propaganda, Democrats depicted Adams as a bombastic, out-of-touch, aristocrat who reigned over the nation like a king and recklessly spent the people’s taxes on the trappings of royalty. “We disapprove,” decried the Democratic press, “the kingly pomp and splendor that is displayed by the present incumbent.”

Worse was the assertion that the high point of Adams’s diplomatic career was having procured “young American virgins for the Russian czar.” The Democratic Party press also accused Adams of being “The Pimp of the Coalition” and of having had “premarital sex with his foreign-born wife.”

Like the Democrats, the National-Republicans waged scandalous attacks in the press. Lurid articles and editorials accused Jackson of being a violent, ill-mannered, “backwoods killer of Indians.” But the accusation that Jackson was living in sin with his wife, Rachel Donelson Jackson, who was accused of being a bigamist, were the most hurtful.

“In the summer of 1790,” charged the Cincinnati Gazette, “Gen. Jackson prevailed upon the wife of Lewis [Robards] of Mercer County, Kentucky, to desert her husband, and live with himself, in the character of a wife.” The accusations devastated Rachel, and, just days after election, she died suddenly of an apparent heart attack, brought on, according to Jackson and his supporters, “by the lies and slander generated during the campaign.”

Jackson’s reputation as an uneducated "backwoods murderer” was also exploited by the National-Republicans, with the indiscretions attributed to him involving gunfights, duels, stabbings, gambling, slave-trading, and other acts that demonstrated his unfitness for the highest office in the land.

Despite these distorted stories of impropriety, Jackson won in a popular and electoral landslide, and when he was inaugurated on March 4, 1829, twenty thousand of his loyal supporters, who believed that they had been cheated out of the White House four years earlier, descended upon Washington, eager to celebrate the long-delayed victory of their champion.

Flash forward two centuries and Donald Trump’s reckless and monarchical conduct in office resembles that of a bombastic, out-of-touch, aristocrat far more so than the Jacksonian "populist" leader that he so brazenly and misleadingly promised his hard-working, blue-collar supporters that he would be, a broken campaign promise that could lead to the downfall of his disgraced presidency in 2020 — or earlier should the steady drumbeat of Russian collusion and bipartisan calls for impeachment continue to incrementally if sinisterly increase.