Ed Simon is the associate editor of The Marginalia Review of Books, a channel of The Los Angeles Review of Books. A frequent contributor to several different sites, he hold a PhD in English from Lehigh University and is a specialist on seventeenth-century literature and religion. He can be followed at his website, or on Twitter @WithEdSimon. 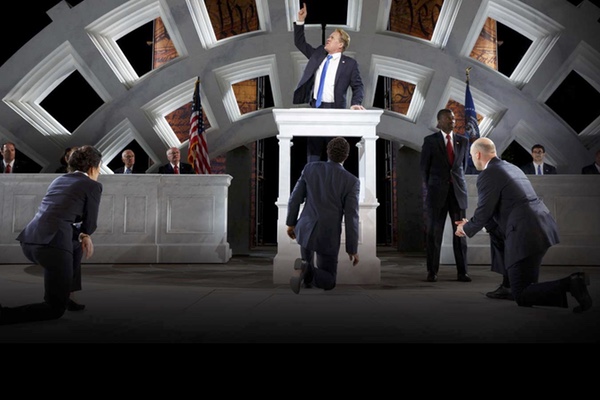 The recent furor in the right-wing press over the New York’s Public Theatre’s current anti-Trumpian Shakespeare in the Park production of Julius Caesar would be funny if it wasn’t so predictable. Following on the heels of the public castigation of comedian Kathy Griffin’s inopportune tweet of two weeks ago (which in light of “ShakesGate” I’m inclined to now charitably interpret as a promotional still for a contemporary staging of Euripides’ The Bacchae), conservative sites have gone apoplectic over the “insensitivity” of director Oskar Eustis’s decision to stage the play in Central Park’s Delacorte Theater, a production which exemplifies the observation that “Shakespeare’s political masterpiece has never felt more contemporary.” The production’s unsubtle message was not lost on the audience when the ancient Roman dictator appeared with a ridiculous blonde bouffant, a cheap, inexpertly knotted tie hanging below his crotch, and a wife who purrs in a Slovenian accent.

As could be guessed, the clanging chorus of the conservative news media was not amused. Fox News, who share Eustis’s distrust of subtlety, disingenuously headlined one of their articles with “NYC Play Appears to Depict Assassination of Trump,” as if one of the great plays of one of our greatest playwright were simply only a “NYC Play.” It’s telling that after much deserved mockery the editors at Fox amended the article to more “prominently state that the mock assassination occurred in a production of Julius Caesar," as if the initial ambiguity in their title wasn’t intentional. Oh the Bard, ahead of his time, a “coastal elite liberal” and dead for four hundred years! Of course that the character of Caesar is in many ways the hero of the play was lost on these pundits, as indeed was the fact that the text itself is vehemently against political violence. Furthermore, in making Caesar Trumpian the director inadvertently complimented a man as consummately incompetent as our current, accidental, Head of State. Despite that, both Bank of America and Delta Airlines pulled their financial support for the play, for an upstanding institution like Bank of America (which surely has never been responsible for any damage to the lives of actual people…) could not be associated with such an intemperate play as Julius Caesar.

Shakespeare has never been politically neutral, and the right-wing anxiety over a New York production of a classic play belies how little of their defense of the canon and of great literature since the hey-day of academe’s Culture Wars of a generation ago was actually just disingenuous posturing. As a teacher of Renaissance literature I’ve often been bemused by conservative hand-wringing over “trigger warnings” and “snowflakes” in need of “safe spaces” and yet anxiety over art often seems to be a particularly reactionary impulse. There is a cottage industry of right-wing pundits with apocryphal stories about sensitive young undergraduates unable to read Macbeth because of violence, or The Merchant of Venice because of anti-Semitism. The phenomenon of overly-sensitive undergraduates clambering against free speech matches little of my or many of my colleague’s experiences as regarding college education today. I’ll note that the petulant opprobrium at Shakespeare in this season of our discontent seems to exclusively be coming from the right side of the aisle, or as scholar Stephen Greenblatt remarked to the Guardian: “What’s kind of amusing, in a slightly grim way, about this is to have Julius Caesar of all things suddenly the point at which the right can no longer endure free expression, which they’ve been hollering for .... Every time they send out a crazy provocateur on campus, they go bonkers if there are protests.”

Bad faith conservative “defenders” of the humanities, from William Bennet in the 1980’s to the more noxious western nationalists of today conveniently try and obscure the historically subversive nature of so much of canonical literature. Elsewhere, I have written that the “conservative defense of the canon is so often a celebration of mere wallpaper, a means of demonstrating one’s education, pedigree, or wealth.” If there was any doubt about the conservative war on the humanities (their claim to be supporters of free speech being shown as totally empty), witness Trump’s catastrophic proposal to defund the National Endowment for the Humanities, an act that is at least honest in its brazen philistinism (in contradistinction to the ravings of the William Bennets and Lynn Cheneys of the world). Let’s remember what’s implied with things like the Fox headline – theirs is not only an attack on Eustis, or a New York theatrical production, but it is also an attack on Shakespeare’s play itself. If conservatives are made uncomfortable that an onstage tyrant reminds them of the president, maybe they’d do better to ask why that comparison is so easy to make in the first place.

Shakespeare scholar Marjorie Garber once provocatively wrote that “Shakespeare makes modern culture and modern culture makes Shakespeare.” She continues by saying that “one of the fascinating effects of Shakespeare’s plays [are that]….they have almost always seemed to coincide with the times in which they are read, published, produced, and discussed.” Julius Caesar has as its subject themes like authoritarianism, treachery, and violence, it serves to reason that in authoritarian, treacherous, violent times Julius Caesar will appropriately enough be on our minds. Julius Caesar, as befitting a Republic such as ours which always made great significance of our perceived Greco-Roman ideological origins, has been perennially reinvented over the years, from Orson Welles’s landmark anti-fascist version of the 1930’s, to an anti-Obama production in Minneapolis five years ago (I’ll add that Fox News was silent on that one). Shakespeare, like all great art, is ours to invent and reinvent. Donald Trump Jr., when not accidentally confirming James Comey’s account of his interactions with Trump Sr., took time to tweet “Serious question, when does art become political speech & does that change things?” Well Mr. Trump Jr., it’s inadvertently a good question – I would argue that “art” is always political speech, and that that changes nothing. Shakespeare has been enlisted in all variety of political causes, often wildly contradictory ones. The multivocal brilliance of the playwright is that he has come down to us as both monarchist and republican, democrat and authoritarian, elitist and populist. There are worlds within the plays of the folio, and that is precisely what can be so threatening about him.

“ShakesGate” puts me in mind of Shakespeare’s younger colleague (and sometimes collaborator) Thomas Middleton, whose 1624 Jacobean play A Game at Chess was "the greatest box-office hit of early modern London,” in part because it contained thinly veiled representations of both King James I, and the Spanish King Phillip IV (in violation of a law which prohibited depictions of living monarchs). After nine sold out performances the play was shut down by authorities. One imagines that had they existed in 1624, Bank of America and Delta would also have pulled their support of that production. It is inevitable that all literature is read and reread within the context of the present moment in which we find ourselves. Shakespeare himself said as much in Julius Caesar when Cicero remarks, “Indeed, it is a strange disposed time:/But men may construe things after their fashion, /Clean from the purpose of the things themselves.”

We are in our own strange disposed time, and it is inevitable that we’ll construe literature after our own experience, separate from the historical concerns which helped to produce said literature. That’s the same as it ever was. But ironically, the rather immutable message of the play is provided in a playbill gloss by its director, who writes that Julius Caesar “can be read as a warning parable to those who try to fight for democracy by undemocratic means.” This, it would seem, is crucial, for in such context a production as this can be read as anti-trump without being pro-violence, with Eustis continuing by explaining that “To fight the tyrant does not mean imitating him.” And this, I think, gets to the heart about what the right finds so dangerous about Shakespeare in this circumstance. It has nothing to do with taste or appropriateness, and everything to do with the fact that such a classic text is able to see a tyrant for precisely what he actually is.