The Myth that Hobbles Our Understanding of the Six Day War

Dr. Yoav J. Tenembaum is a lecturer at the graduate Diplomacy Program (Political Science Department), Tel Aviv University, Israel. He holds a doctorate in Modern History from Oxford University and a master’s degree in International Relations from Cambridge University. 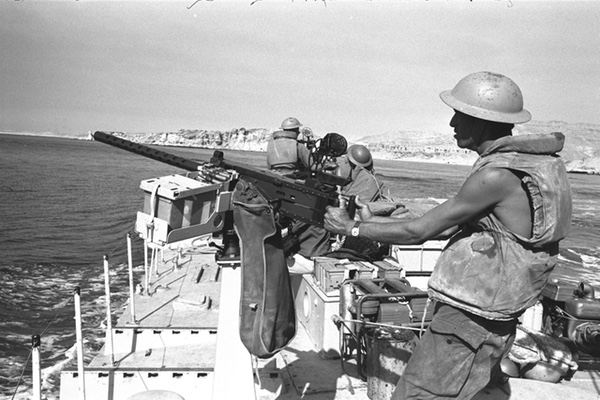 An Israeli gunboat passes through the Straits of Tiran near Sharm El Sheikh. By Yakov Agor - CC BY-SA 3.0

The Six Day War, which took place this month fifty years ago, has left a most enduring legacy. It has convinced the Arab leaders that Israel cannot be destroyed by military means. In a sense, if the Yom Kippur War of October 1973 has led the Arab world to recognize that it should gradually engage in some form of a peace process with Israel, it was the Six Day War of June 1967 that led it to the conclusion that Israel, as a sovereign state, cannot be destroyed militarily.

It is in vogue, particularly in Israel, to recall the Six Day War for the burden it has left the country with, which has had to cope with the occupation of the West Bank and Gaza with its large Palestinian Arab population.

To be sure, a rather ahistorical approach has emerged in this respect. The term "fifty years of occupation" is uttered in a facile manner in reference to Israel's control of the West Bank and Gaza, without paying much attention to the historical complexities which render this term inaccurate.

To begin with, the Oslo Accord signed by Israel and the Palestinian Liberation Organization (PLO) in September 1993, has led to the evacuation by Israel's armed forces of the major centers of population in the West Bank and Gaza and to the establishment of the Palestinian Authority, thus ending Israel's presence in the cities and towns inhabited by Palestinian Arabs that had existed until then.

Certainly, following a spate of terrorist attacks, which led to hundreds of Israeli civilian casualties, in the so-called Second Intifida, the Israeli army launched a military operation in the West Bank in 2002 aimed at destroying the terrorist infrastructure there. Thus, the Israeli armed forces returned to the populated areas of the West Bank. Even Saeb Erekat, the chief negotiator of the Palestinian Authority, said then that Israel had re-occupied the West Bank.  This clearly denotes that, previous to the Israeli military operation in 2002, there had been no Israeli occupation in those areas of the West Bank – as a result of the Oslo Accord.

Also, as far as Gaza is concerned, Israel had evacuated its military forces from the areas inhabited by the Palestinian Arab population as a result of the Oslo Accord of 1993. In 2005, Israel withdrew unilaterally from the entire Gaza Strip, leaving no Israeli soldier or civilian there.

Considering the aforementioned, the phrase "fifty years of occupation" is too categorical and simplistic a statement to be accepted at face value.

Of course, there is an implied criticism of Israeli policy in this regard as if those "fifty years of occupation" could have been ended by an Israeli decision. In this context, there is a tendency to draw a facile comparison between Israel's control of the West Bank and Gaza and colonial rule by European powers up until the second half of the 20th century. According to this line of thought, as the end of colonial rule brought about a solution of the prevailing conflict between the colonial power and the local population so would the end of Israel's control of the West Bank and Gaza produce a solution to the Arab-Israeli conflict and bring about peace and stability to the region.

The differences between the two cases are obvious: A withdrawal from a colony did not constitute a danger to the sovereign territory of the colonial power as the forces fighting for independence did not covet the territory of the colonial power itself. In Israel's case, at least some important segments of the Palestinian leadership, such as Hamas, for example, would not accept any settlement that did not entail the disappearance of Israel as a sovereign state. Even those who claim they would accept a two-state solution, call for the so-called right of return, which, if implemented, might lead to the peaceful destruction of Israel as a Jewish state.

Also, the geographical distance existing between the colonial power and the colony it controlled afforded the first a margin of error which does not apply in Israel's case as the West Bank and Gaza are immediately adjacent to Israel's populated areas. Further, contrary to all major colonial powers in modern history, Israel has to contend with other forces seeking its destruction, which have to be taken into consideration in shaping its national security policy.

A mere mathematical-like formula such as Israeli withdrawal leads to peace which leads to stability is thus an oversimplification. That is surely something we can learn from the history of the Arab-Israeli conflict in the last fifty years.

This leads us to an additional observation: However important it is in a historical context, the Six Day War is not the cause, but only an important manifestation of the Arab-Israeli conflict. The Six Day War altered some significant aspects of that conflict. In a sense, it became a watershed as it led to a growing awareness among the Arabs that Israel would not be erased from the map by an act of military will.

Still, many central historical events of the Arab-Israeli conflict occurred prior to the Six Day War, such as the founding of the State of Israel, the War of 1947-1949, the 1956 War, the creation in the 1950s of the Palestinian Arab Fedayeen, and of the PLO in 1964, etc. The Arab-Israeli conflict did not start with the capture of the West Bank and the Gaza strip by Israel in June 1967.

A landmark in the history of an international conflict, as the Six Day War undoubtedly was, is a particularly significant stage in an already-existing conflict, not its inception.